Tales from the Thrift Store vol. 14

Last month's trip to Serenity Thrift was highly unusual, in that there video section was completely full, in fact their shelves were so full that the excess tapes had spread over to one of the book bins. Seeing as how videos (and DVD's) are my primary goal when going to any thrift store, this overflow of VHS was certainly not a problem, when it comes to videos... there's no such thing as "too much"!

I mentioned at the time that I usually only stop in there about once every six months or so, but because of their anomalous excess of tapes, and the unexpected bounty that resulted from that excess, that I would be returning much sooner than normal, and true to word, I did!

It had been about a month as of last week, and I figured that that was enough time to have let passed in between trips, plus I had to, or at least wanted to, check out all of the Halloween goodies at The Dollar Tree that's located right next door to the thrift store.

So, was it a successful trip? Was it a bust? There's only one way to find out... 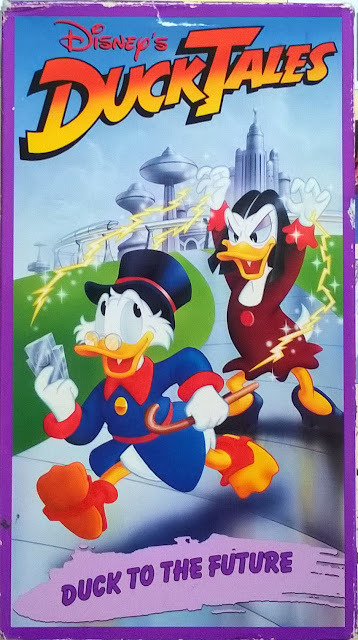 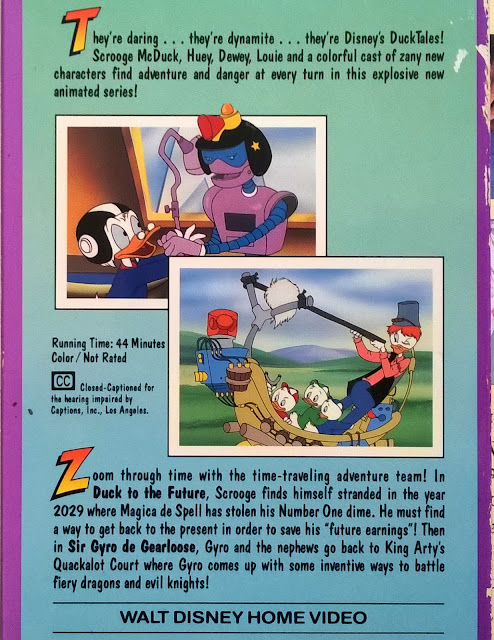 After finding multiple Disney Afternoon tapes last month -- which are becoming increasingly rare to find -- I wasn't expecting to come across any more, but I did, well, one to be exact. I don't know if it was intentional or not, but this was sitting right next to a Back to the Future box set, which I would've also bought had it not been an ex-library copy. 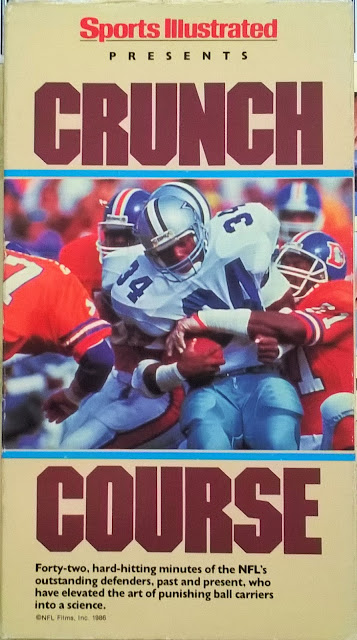 I know that we're all supposed to be sensitive to head injury's, and offended by the barbaric testosterone laden sport that is football (at least that what Twitter tells me), but g**damn do I love these kind of videos! Think of me what you will, but I still enjoy seeing quarterbacks getting smoked, and receivers getting dead when venturing across the middle. Also, this box is the same on both sides, hence only seeing the one side. 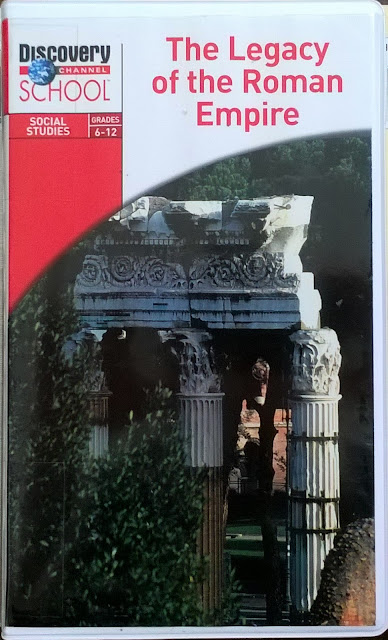 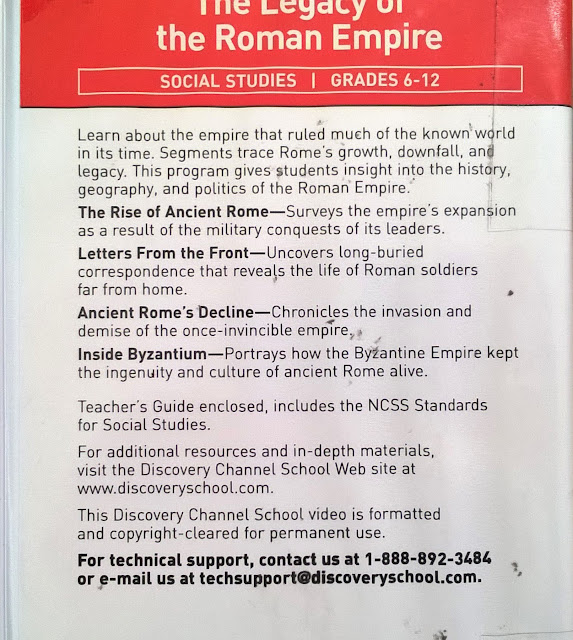 This came from a local high school, who I'm assuming finally upgraded (DVD?), funny though, I didn't think anything like this was still shown classrooms. They had another one on the geography of the Bahamas, but I left that one behind. When I went to pay, one of the gals at the counter just couldn't not mention that they had a bunch of these last week, which of course didn't do many me any good, and probably didn't need to be said. 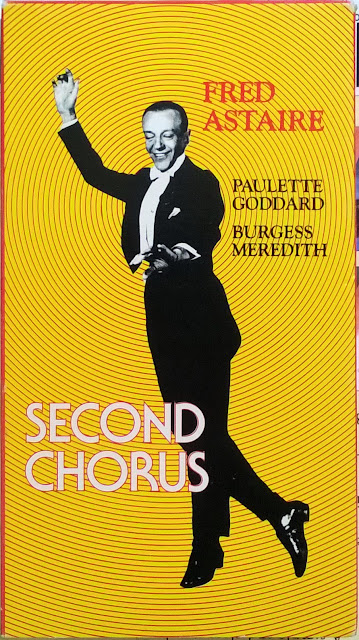 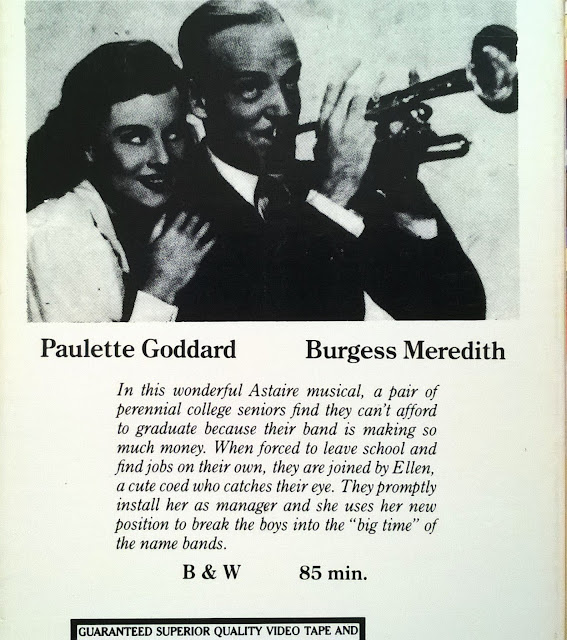 A Fred Astaire film that I wasn't familiar with? Yes, please! As an aside, the cover is very Vertigo-ish, which I found to be quite appealing as well. 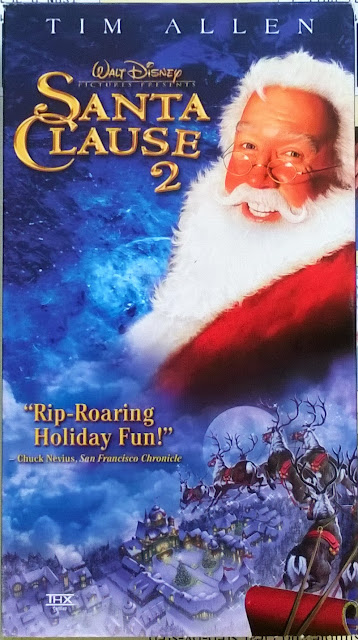 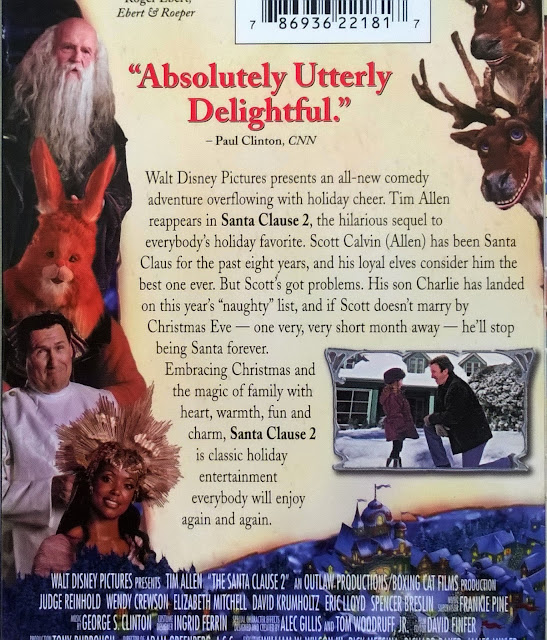 Last Christmas I watched The Santa Clause for the first time, and enjoyed it quite a bit more than I thought I would, and I've sort of been keeping an eye out for the sequel ever since -- but it's gonna be a few more months before I have an opinion on it. 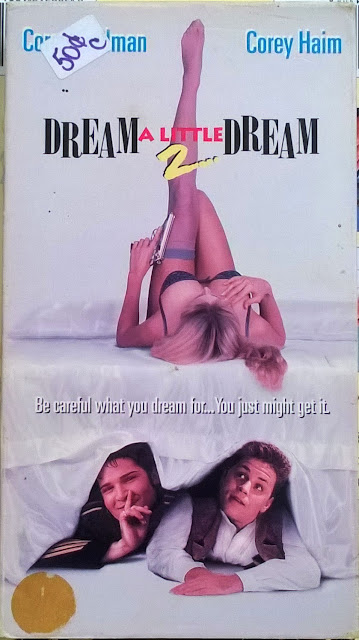 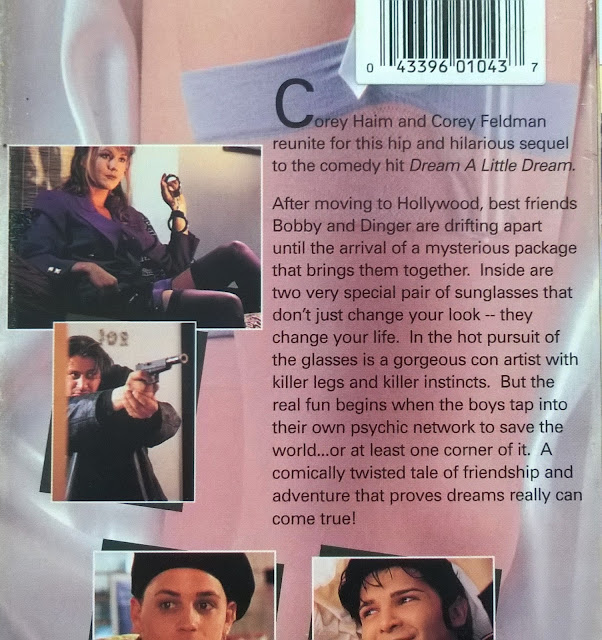 Geez, Dream a Little Dream is a film that I haven't thought about in forever! Anybody remember that one? Kind of crappy knockoff of Freaky Friday. I always enjoy seeing the Corey's, but that movie was not good. And if I'm being honest, I kind of forgot that a sequel had been made, I never saw it, but I'm guessing that it too will not end up being very good... but I still had to give it a go :)

I can't remember how many videos were brought home last month, so I can't say whether or not this was a more successful outing, but finding six this time was pretty good, certainly worth going that's for sure. And I found a couple of things for some future Halloween craft projects at The Dollar Tree, which is always a plus, now if I could just stay focused long enough to work on some of those projects...

My mom took a mini-vacation last week, and even though it turned into more of a working vacation, she still found some time to hit up a couple of thrift stores in the area, thrift stores that ended up yielding a couple of more videos for yours truly! 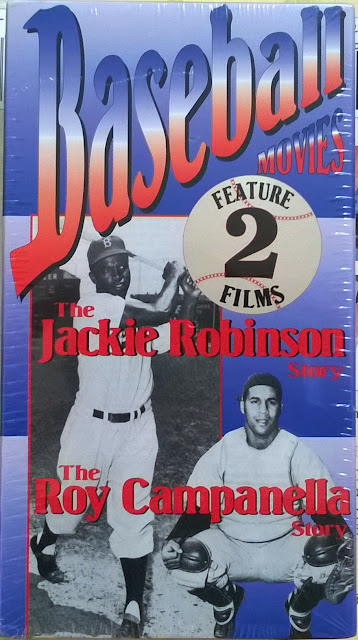 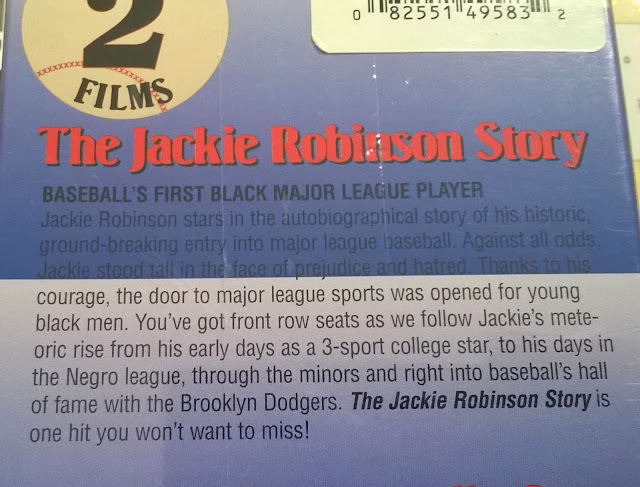 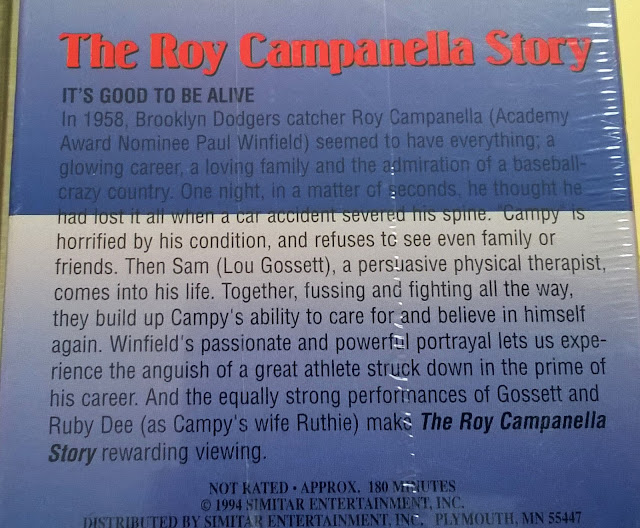 Generally speaking, I'm not huge fan of sports movies, well, at least not those that revolve around the big three -- but I will certainly give this still sealed 2-tape set a try. I've never seen either of these films, and was only familiar with the Jackie picture, although after reading the synopsis, I think that the Campanella biopic is going to be the better of the two. 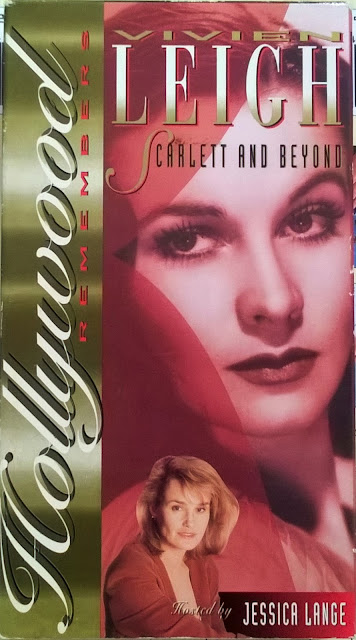 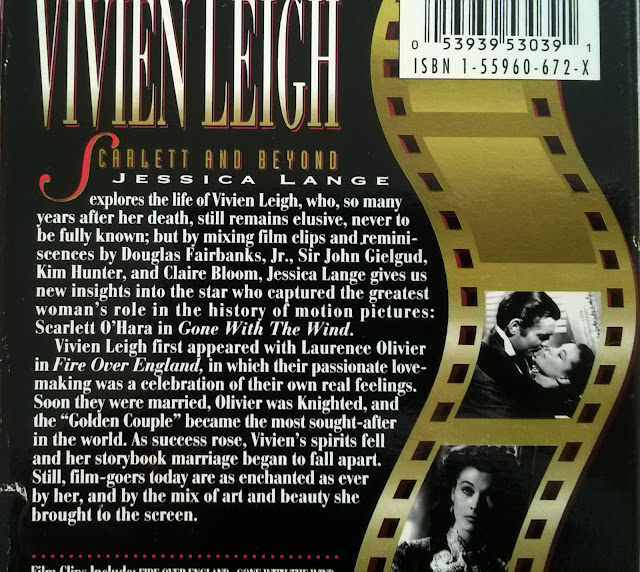 I'm always down for retrospective's of stars from the golden era. 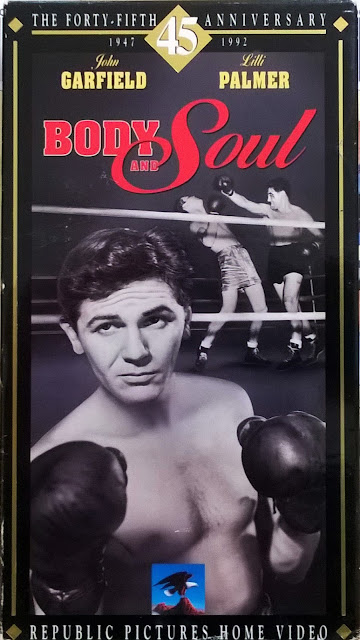 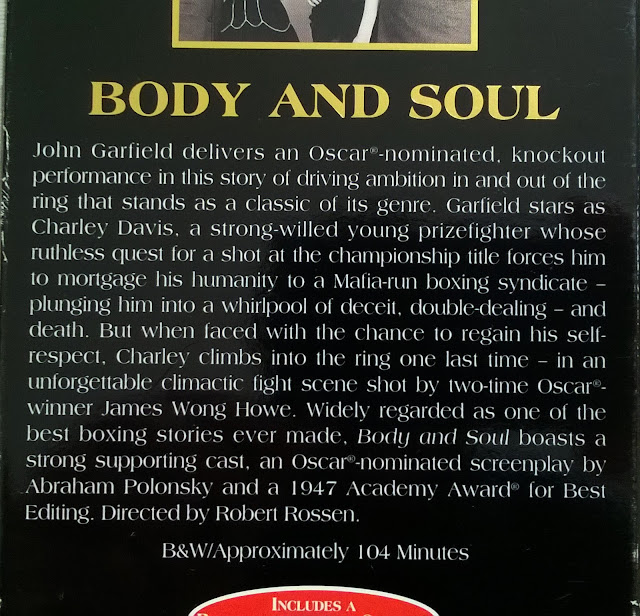 Body and Soul fits into the category of "been meaning to see it for years, but have never had the opportunity to do so"... it's always nice to be able to remove something from that list :)

Many thanks to my mom (she doesn't read the blog, but it's still good to give public thanks) for the videos. And for anybody who might be interested, I went to Goodwill, and Big Lots, a couple of days after going to Serenity Thrift, both provided me with plenty of goodies (especially Big Lots), and both hauls will be shown in separate upcoming posts.


Thanks for taking a moment to look at my page.
Posted by Jon at 9:24 AM