Are you ready for some... 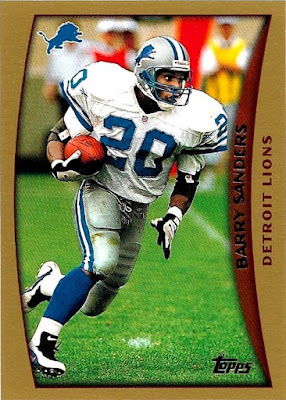 I don't know if you've heard or not, but the NFL is back. I say this with tongue securely in cheek, as it's pretty hard not to have known this, well, unless you're me of course, and then you're just hearing about it this morning (Tuesday).

Apparently my not keeping up with current affairs is continuing on it's downward trend. Last I heard, they hadn't even decided whether the season was going to happen or not, although I kind of figured that it was going to, as there's just too much money on the line for it not to happen.

I guess I should of known that something was amiss though, as my Twitter timeline has changed quite a bit in recent weeks, going from discussions involving people I don't follow about which baseball and basketball players will make for the best investments, to people I don't follow trying to figure out who they should invest in football-wise. I have no idea why I always have to see these peoples sh*t, and I really don't know who they should be investing in, nor do I care, but if I were so inclined, I could certainly tell them who not to invest in; that'd be easy, I'll they'd have to do is look through the football portion of my order from the Baseball Card Store, and they'd find a whole slew of guys that aren't "investment" material... 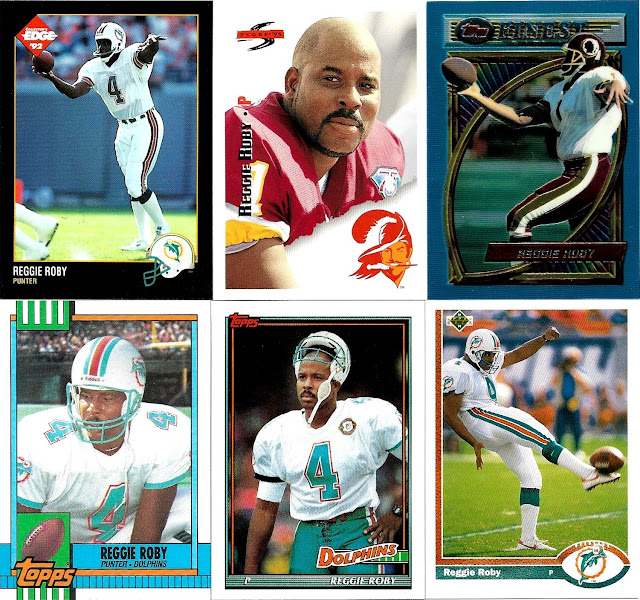 You had to know that there was going to be some Roby in here, right? The Top row were all new to the collection, and the 1992 Collector's Edge was new to me, period! I've somehow never seen that before, I ended up grabbing a few of those, some of which might be shown below.

The bottom row were all cards that I was hoping to upgrade. I opened up my boxes of 1990 and 1991 Topps during my hiatus, and got Reggie in both of them, but both were conveniently damaged. The '90 is interesting, because my box was a "disclaimer on the back" box, while the one that I got from the BCS is of the "no disclaimer" variety. On a somewhat related note, I was hoping to get a post or two out of those boxes, but the inspiration just wasn't there, I do however have tons of extras, so if anybody's looking for something from either of those sets (I have lots of 1991 Upper Deck extras as well), don't be shy about saying so. 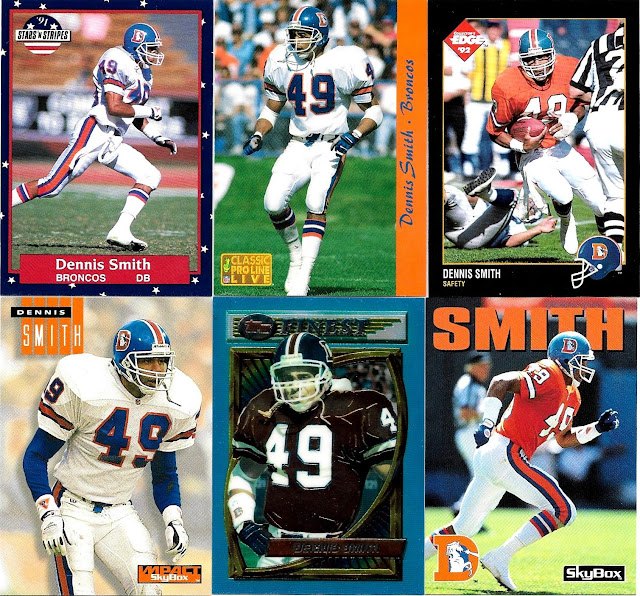 Collecting Reggie Roby has been my primary football goal over the last year or so, but a couple of guys have quickly moved up right behind him in recent months, Dennis Smith being one of them, as well as his brother in bruises... 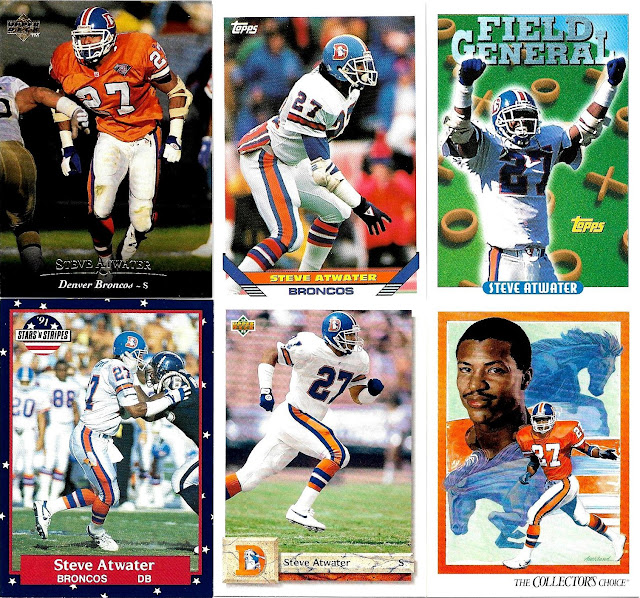 ... The Smiling Assassin! I attribute their quick ascension to all of the old Broncos games that I've watched this year, I think I've become addicted to watching them destroy any and all opposition, and in Steve's case, the occasional teammate as well. 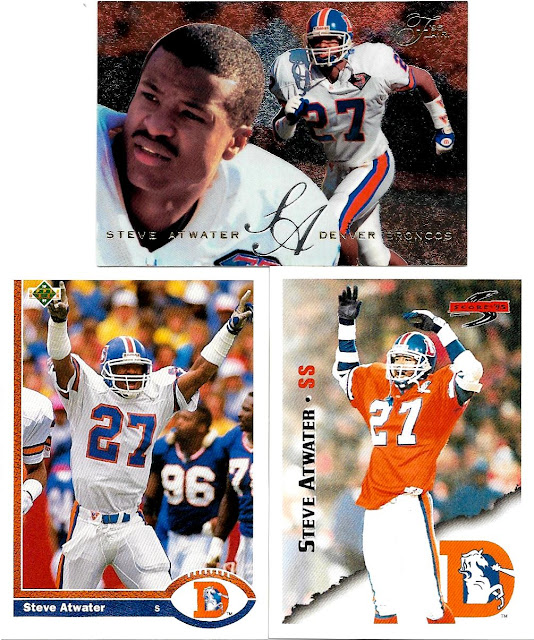 This site seems to have a lot of '95 Flair, for all sports, which worked out well, because I seem to be needing a lot of cards from that set, across multiple sports. Sometimes I feel like I may have missed out on something by never getting a single pack Flair, from any year, but I also know that it was kind of expensive back then, and there was only so much money to go around for cards. Oh well, it's too late now, besides getting singles for ten cents apiece is more my speed anyway, not quite as fun as opening packs, but certainly good enough for the way I'm collecting nowadays. 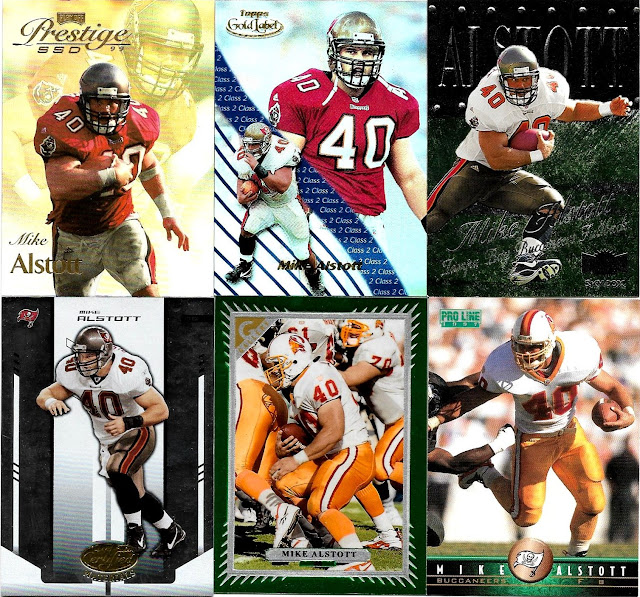 Mike Alstott is one of my newest player collections. I really liked him as a player, but am not overly fond of a lot of the sets that his later cards appear in, and won't be willing to pay very much to get them, so I'm not really sure how far this particular collection will ever get. 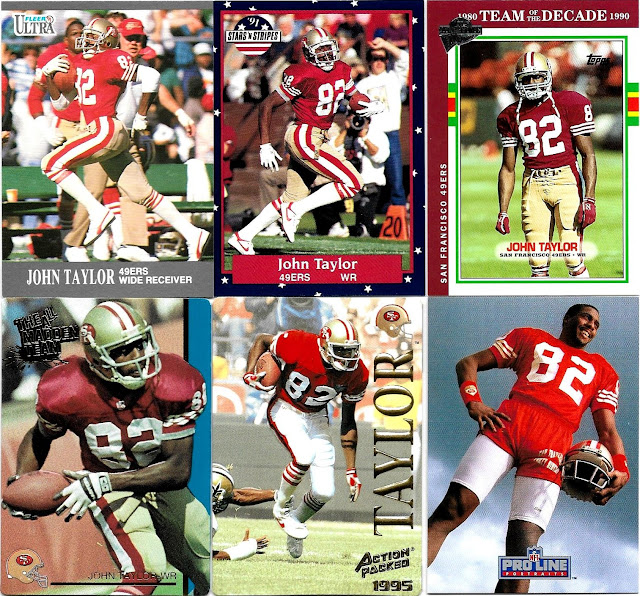 John Taylor doesn't seem to get a lot of hobby love, which is unfortunate for him, but good for me, as I've been finding a lot good things, for very little money. 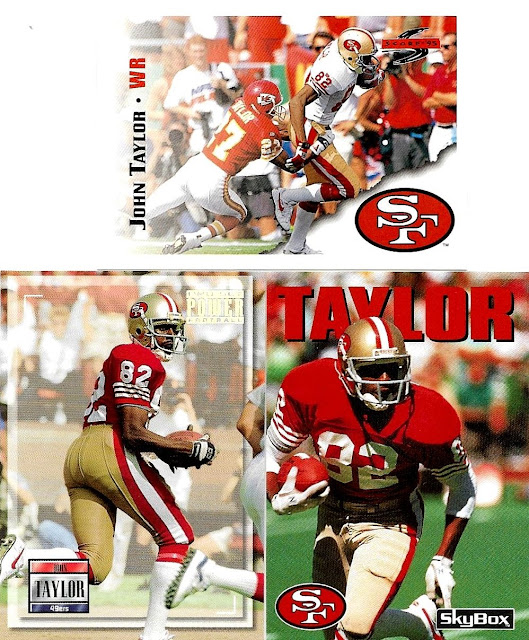 I think I should just go ahead and declare this the year of Pro Set Power. I never saw it before this year, and now I see it everywhere! 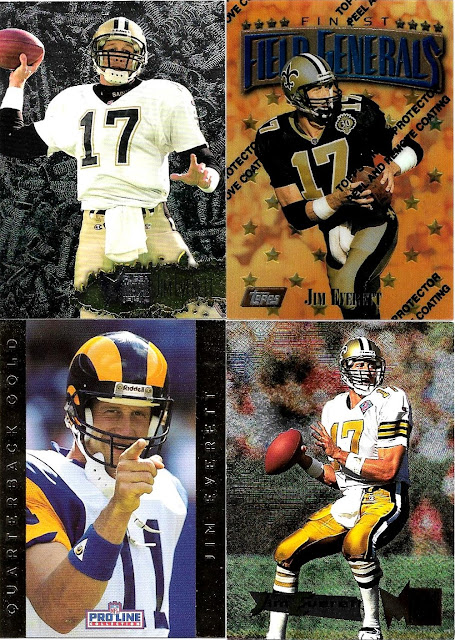 I should've been collecting Jim Everett much sooner, if only because of the whole making Jim Rome piss himself thing (someday I'm gonna do a whole post on how much I dislike Jim Rome). And for those that care about such things, the upper left Metal is a Silver Flasher, and for those that don't know, that just means that it's silver, and sort of flashy. 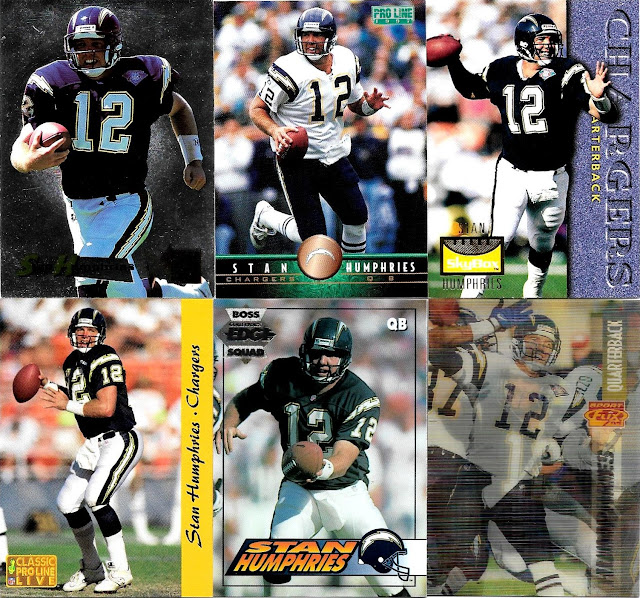 I think that Stan Humphries is my newest player collection, and I'm kind of hoping that he'll be my last too, it's gotten a little crazy over here with the player collections. And in case you're wondering why Stan Humphries? Yeah, I don't know why. Earlier this year when I opened that old pack of Zenith (I don't feel like looking for the old post to link it up, but you're more than welcome to look for it if you like), I got kind of  a weird feeling (no, not disgust) when I saw Stan in there. I think that I've got an old memory rattling around somewhere about him, but I can't seem to recall what it is -- I knew I shouldn't have let Kirsten Dunst come over that one time and dance around in my room while I slept. 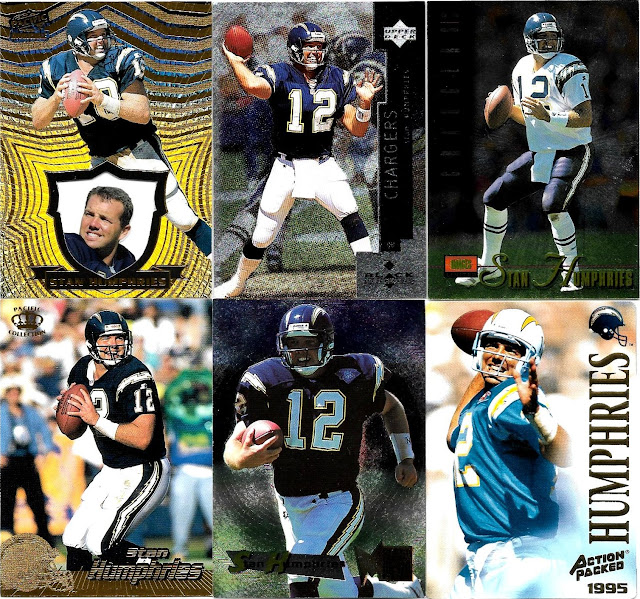 The folks that run this site probably couldn't believe that someone was buying all of their Stan Humpries'! I think I got about 20 total, including another Silver Flasher (first scan), as well as it's base companion (this scan).

The Bobby G collection is going to be an easy one to complete, at least the playing days portion, which is all I'm really interested in, well, that, and... 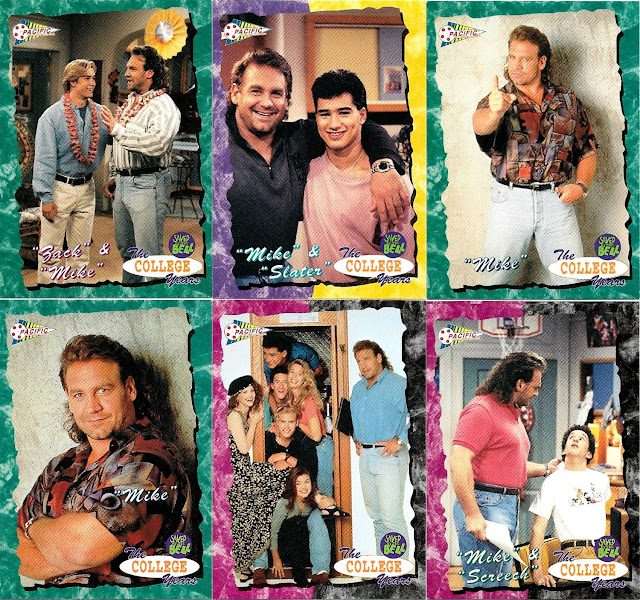 ... these! I was able to get all of his base cards from this set (15-20?), and I've got his Prism insert sitting in my COMC account, which leaves me needing just his promo card (it's on my want list) to complete the The College Years run, his portion of the run that is. 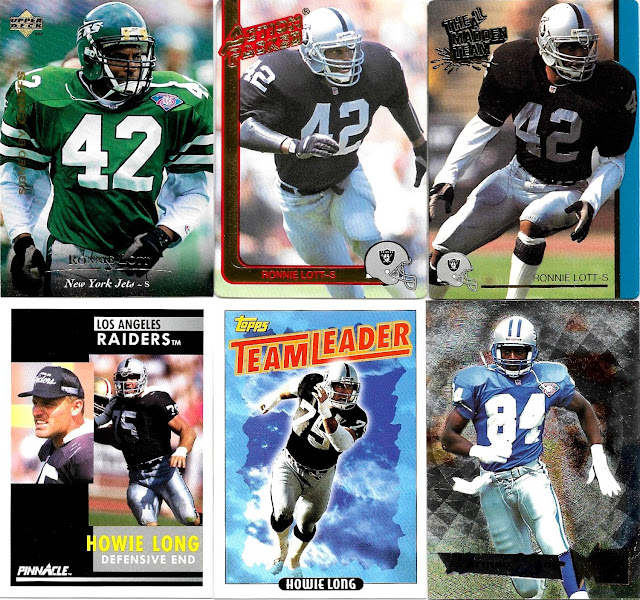 Here's a trio of fellows that I wish the site would've had more cards of. Along with Dennis Smith and Steve Atwater, Ronnie Lott is the other guy that's moved way up on the collecting list. I always forget that Action Packed was still making football cards in 1995, probably because I wasn't buying any of those back in '95 either. No Flair, no Action Packed, apparently my collecting tastes were not good.

I thought I'd end with another set that I had never seen before, 1996 Playoff Contenders Open Field. I have no idea if these were an actual set, an insert set, parallel, or what? I do know that they're cool as beans though. They're about three quarters the size of a normal card, and have a really bitchin' hologram background, but other than that, they're all mystery. I don't sets anymore, but this one is awfully tempting !

I've already got another order with the BCS started, and even though it won't end up being as big as this one was, I think that when I get it, I'll just do a top ten or something. These last three posts required a lot more scanning than I would've liked, and a heckuva lot more typing than you would've liked.


Thanks for taking a moment to look at my page.
Posted by Jon at 9:17 AM