Another week, another ten randomly selected cards from last year's COMC hoard!
﻿
I am fourteen cards away from completing this set, and like most of my other nearly completed sets, I'm not entirely sure that I want to bother finishing it anymore. I'd kind of like to pull out some of the names, and just sell the rest. I think I'm only a few cards (not counting the Star cards) away from having everything that came out during Kareem's playing days, I might be kind of nice to have it altogether in one place? No matter what I end up doing, this is still a great card, one that just so happens to feature three of the greatest centers to ever play the game.

Even though Terrell Brandon is a Portland guy, I can't say that I was ever a huge fan of his. He ended up having a pretty solid career, and by all accounts he was always a good dude off of the court, so in retrospect, I feel a little bad for not supporting him more -- after all, it's not like there's been that many NBAer's to come out of Portland.

Yes, this is a cool item, but I'm still down on the Milk Duds boxes.

Kool be holdin' a turntable while rocking an old school Bullets hat! This card is so great that I think I'm gonna have to clear my throat before continuing on with the rest of this post :)

There's been serious lack of gold Dickerson's being added to COMC (and eBay for that matter) as of late, how am I supposed to complete my goal of getting an entire page's worth if people aren't listing them? There was just recently one of the orange optichrome's on COMC, but after getting the one that I have, and seeing how they're not the greatest looking parallels in the world, I decided to pass on the COMC one. That being said, I still might've bought it had the price been a little lower, but it ended up selling, so I guess I don't have to worry about it anymore.

I seem to recall watching an NBA game or two back in '97 where they were using an ABA ball, but for the life of the me I can't remember why, and I'm feeling little lazy while typing this, so I'm not gonna go look it up -- if your curiosity has been peaked, you can go look it up! :)

There doesn't seem to be a lot of information out there about Art Fromme, it's pretty much just his career stats, and that's it. He spent ten years in the bigs, pitching for the Cardinals, Reds, and Giants. He finished his career at 80-90, with a 2.90 ERA. His best season appears to have been in 1909 while with St. Louis, went 19-13 with a 1.90 ERA. After the majors, he spent seven seasons in the PCL, all seven of those being with the Venice/Vernon Tigers, where he ended up having a little bit more success, going 93-66. 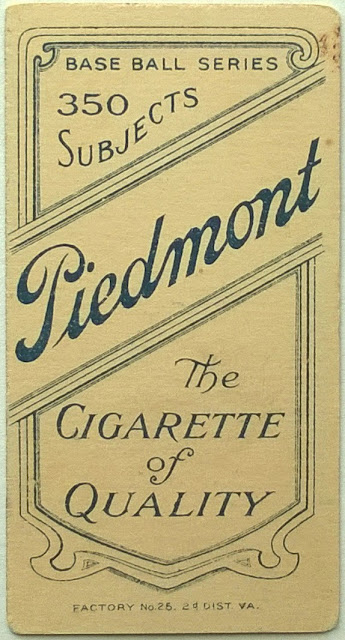 For you back addicts :)

Being able to get a gaudy card of a young Elgin Baylor is one of the reasons why I like the earlier Prizm sets so much.

I was still working on the set when this card was gotten, a year later, and I'm no longer working on the set... I wonder if it's too late to return it? I'm kidding of course, I shouldn't have too much trouble trying to trade this, it is one of those dreaded high numbers after all.

After pulling today's cards, I am now down to only eight weeks worth of Shuffle stuff left...


Thanks for taking a moment to look at my page.
Posted by Jon at 9:30 AM