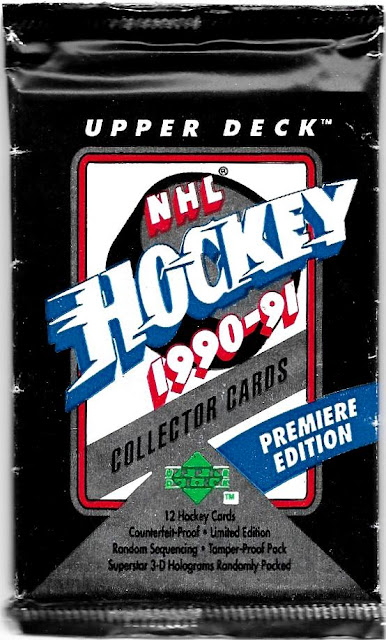 I was trying to avoid doing two pack opening posts in a row, but I've been pretty lazy blog wise this past week, so you're getting another pack opening post. I promise that I won't do three in a row though... at least not at this time!

Today's pack is yet another one that I picked up for a quarter at ye olde "copy/print/card" shop a few months ago. As many of you already know, I'm not very well versed in hockey, and this is now only the second pack of hockey cards that I've ever opened, so be sure to take everything that you read in this post with a grain of salt -- because it's entirely possible that some of factoids are wrong, they were found on the internet after all.

There were a few different $0.25 hockey packs to choose from, I ended up going with this one mostly just because I hadn't recalled ever seeing any cards from this set, although upon opening it I did quickly realize that I have in fact seen this set on the blogs many times before. I was also sort of hoping to land a hologram, I didn't really care who it was of, I just wanted one. So, did I get one? Well, you'll just have to continue scrolling down to find out, won't you? 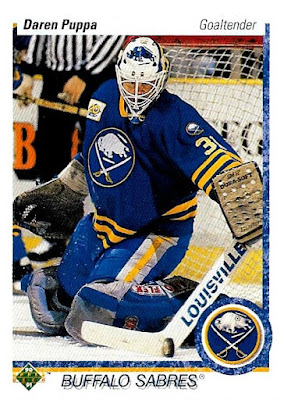 Even though as mentioned, I had seen these before, but I never noticed that the half border was color matching. It's kind of interesting that Upper Deck chose to do this with their inaugural hockey set, as they didn't do it on any of their other debut sets at the time. 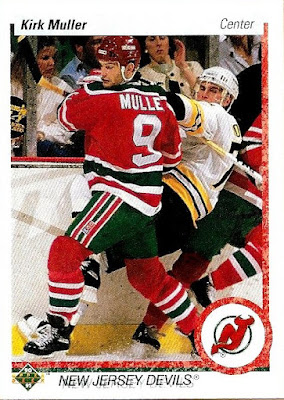 Looking at Kirk's Wikipedia page, I think his career can be summed up by saying that he was drafted by the Devils in '84, had a lot of early success, two teams and nine years later won a Stanley cup, then spent the next five years being a sulky bitch, before finally deciding to class it up, which allowed him to wind down his career with some dignity. 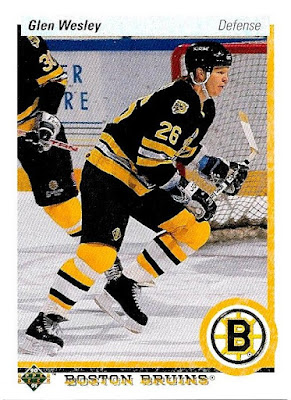 Glen made it to the Stanley Cup Finals four times during his career, twice as a Bruin, and twice as a Hurricane. He was on the losing side the first three times, but finally got to hoist the cup on his fourth try in 2006. He was also a Portland Winter Hawk way back when, so that's kind of interesting, at least to me. 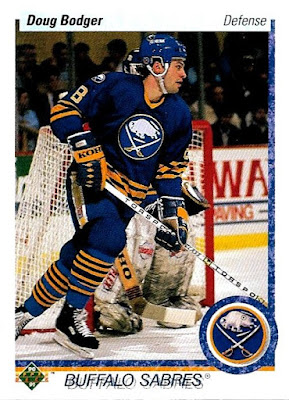 Doug Bodger? I don't know of a Doug Bodger, but I do know of one... 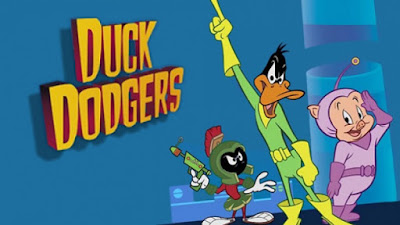 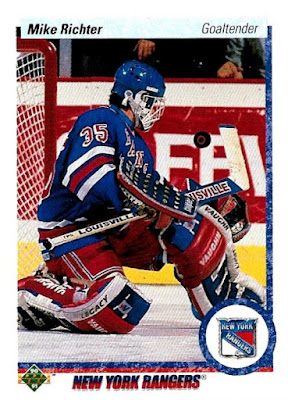 Hey, a name I actually recognize! Doug spent his entire 14-year career with the Rangers, won the Stanley Cup in 1994, and is a member of the U.S. Hockey Hall of Fame. 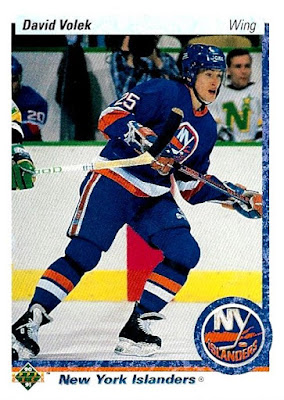 I'm not one to normally cast aspersions on the physical appearance of others, but when I first saw this card (before I saw the name), I thought that I was looking at a lady ice hockey player -- the angle of the photograph certainly didn't do poor David any favors. 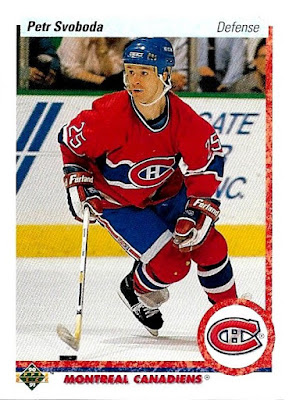 Petr was the first Czech player to log 1,000 games in the NHL. 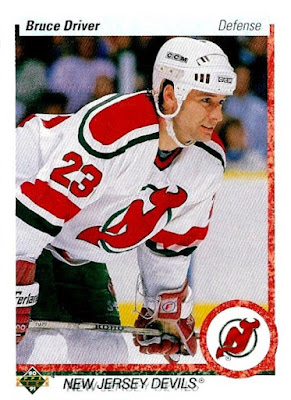 Apparently this pack was loaded with guys who have won Stanley Cup's, Bruce doing so with New Jersey in 1995. 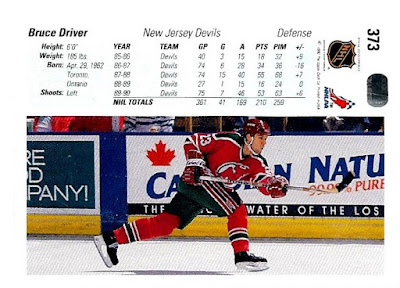 Taking a look at one of the backs, their typical for early Upper Deck, even down to them using a photo that was far superior to the one that was chosen for the front. 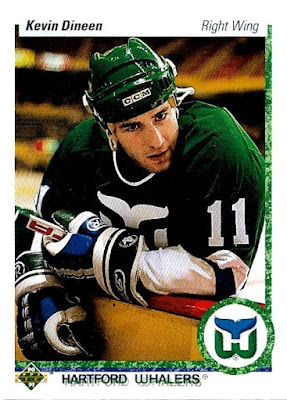 Chris is currently MIA (and I'm not being facetious this time), he's been disappeared for over a month and a half now, and isn't replying to emails -- maybe the power of a Whaler being shown on a blog will be enough to bring him back to us! 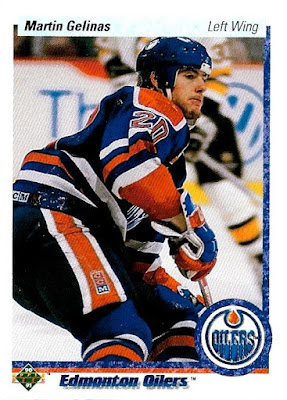 Like Glen Wesley, Martin played in four Stanley Cup Finals during his career (even played in one of them alongside Glen), and he too was only on the winning side during one of those four appearances, that being his first attempt with Edmonton back in 1990. 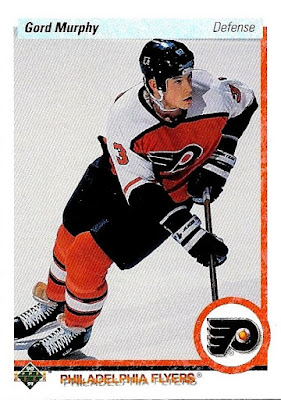 Gord is short for Gordon, with him being from Canada, I briefly thought that his parents might've actually saddled with just, Gord! 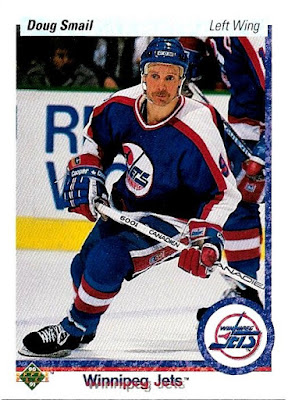 If I sent this card to Doug for a TTM request, would that be considered sending something via Smail mail? :)

Well, as you can see there was no hologram to be had this time, but nevertheless, it was still a fun pack to open. Speaking of packs, am I the only one who still gets a great deal of satisfaction from the actual act of opening these early Upper Deck thick-foil wrappers? Just the sound they make when being opened, I mean even after all of these years, I can't get enough of that sound! Plus you can really wad these wrappers up into quite the tight little ball, I remember having battles with friends when I was wee lad, it was always surprising how much sting those foil balls could produce (especially if multiple wrappers were wadded up together) when making contact with bare skin. Anyways, I could probably talk about these wrappers indefinitely, but I'm sure some of you have other things to do today, so I'll just cut the post off here.


Thanks for taking a moment to look at my page.
Posted by Jon at 8:07 AM