Season's Greetings From The Past

Last week I went to the antique mall that I have posted about on three previous occasions now, which you can see here, here, and here.  If you're the sort that enjoys miscellaneous old paper ephemera, this place is an absolute treasure trove. Having not been there for about six months or so, I found plenty of new (or, rather old) things of interest, and then proceeded to purchase quite a few of said things.

A much longer post covering all the newly acquired stuff will be forthcoming within the next few weeks, but seeing how it's Christmas Eve and all, I thought I might show the one item that ties in to this weekend: 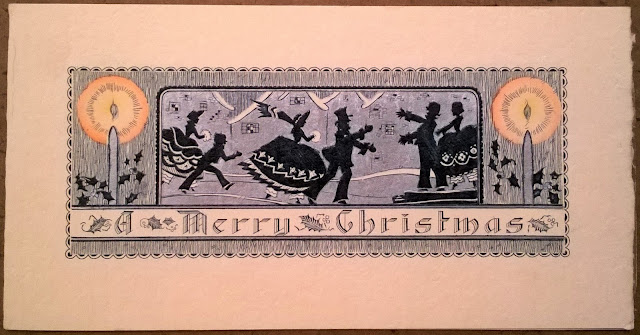 I was like a moth to this card, what with it's embossed and semi foiled center image, double weight paper, and a rough cut right side. For $1, I couldn't resist.

Since I don't think the above cell phone camera image does the card justice, I made a few more attempts: 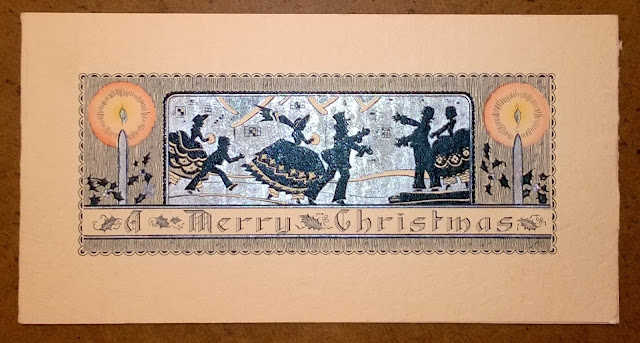 This one was with the flash on. It's not great, but at least it shows the blue foil part of the image a little bit.

And that is a scan, which didn't turn out too bad at all. Aren't obsessive compulsive tendencies grand?

Moving to the inside which still has a gold sheet of some kind of blotter paper.

For those that might have a little trouble reading that, the contents are as follows:

I am working hard at the University. The sixteen and seventeen year old freshmen are much speedier than I, but they don't appreciate their opportunities as much.

How are you? I never think of you without also thinking of your wild flower garden. Now it is safe under a blanket of snow.
Sincerely yours,
Ellen B. Laurin

The last name of the sender appears to me to be "Laurin", but I'm not entirely sure about that yet as I haven't come up with any positive results from internet searches.

The receiver of this lovely card, Margaret Bregger, might have been the Margaret C. Bregger (age 35ish) that was living in Ramsey, Minnesota in 1930 --- according to a 1930 Census report on Ancestry.com. At some point in the future when I have more free time, I fully intend on doing some more thorough researching.

So I will wrap (pun?) this one up by wishing everyone a very Merry Christmas, and to those of the Jewish faith, Happy Chanukah!


Thanks for taking a moment to look at my page.
Posted by Jon at 5:52 AM