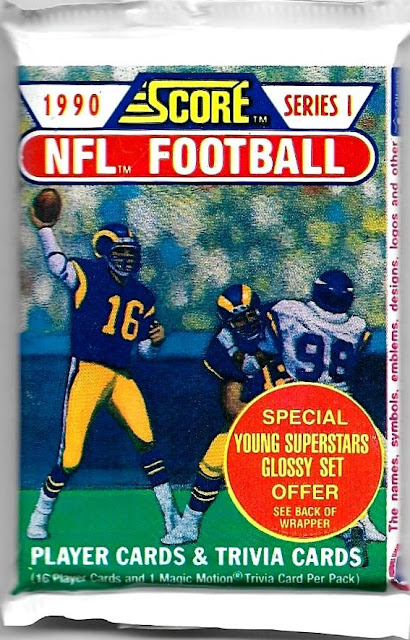 Now that a couple of decades have passed, I find myself looking at this set with very little affinity, the '89 set still holds up pretty well, this one... not so much! But a quarter is a small price to pay for a blog post (not that I'm lacking for material mind you), and if I'm lucky, I'll get a few keepers out of the deal.

With 16 cards (plus a trivia card) in this pack, it might be good idea to go to the bathroom before reading any further, because it's going to take a few minutes to get through this one. 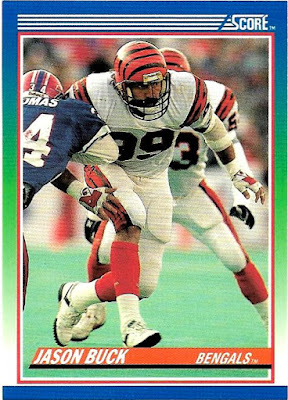 Jason was a member Super Bowl XXVI winning Redskins team, that might not seem very interesting at the moment, but just wait until we get to the end of the pack, then you might think otherwise. 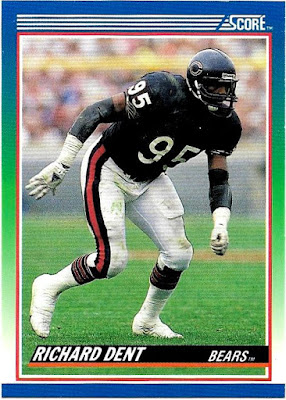 Just two cards in, and we've hit our first HOF'er, huzzah! Was third on the all-time sacks list when he retired, but has since dropped into a tie at ninth with John Randle -- and the two of them will likely fall to 10th by seasons end, as Terrell Suggs is only a sack and a half behind them. 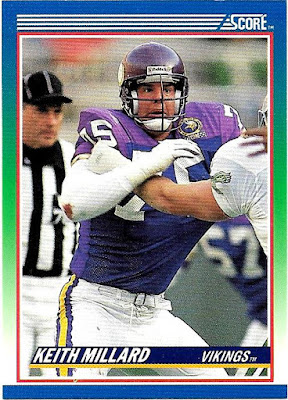 In 1989, Keith set a single season record with 18 sacks by a defensive tackle, a record which held until 2018 when Aaron Donald recorded 20.5 sacks (that was good enough to lead the NFL as well). 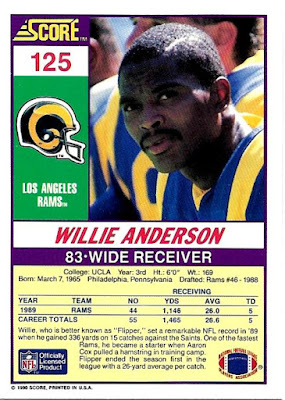 Standard Score football back for the era. 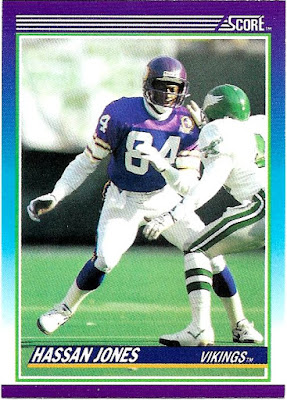 At this point, Hassan is probably best remembered for his want to chop. 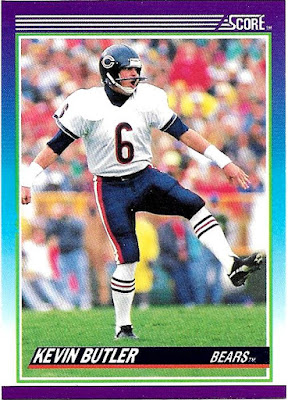 Kevin holds the record for most points scored in Georgia (Bulldogs) history, and is second all-time in the SEC in points scored. Was the first, and still only, kicker to ever be elected to the college football hall of fame. 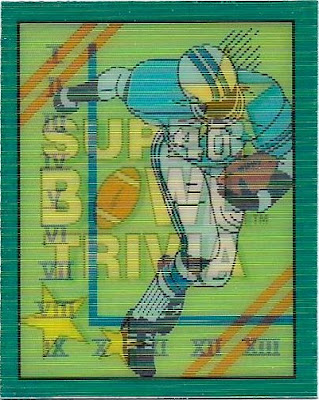 I hated finding trivia cards in packs when I was a kid, all these years later, and I'm still not overly fond of them. But for the sake of fun, here's the question: 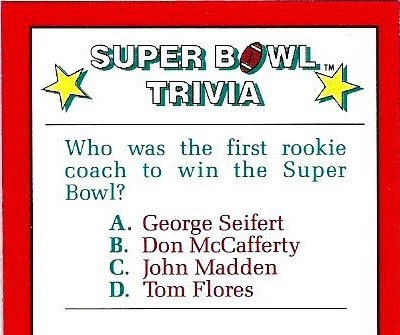 Time to put your pens down... let's see how you did!

Did you get it right? I did not, but then again, sports trivia has never been a specialty of mine (unless wrestling counts as a sport), so I'm neither surprised or upset about guessing wrong. 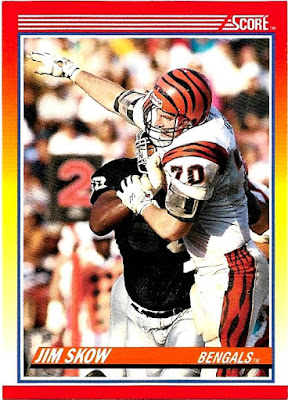 Apparently Jim went from laying fools out, to lawyering. 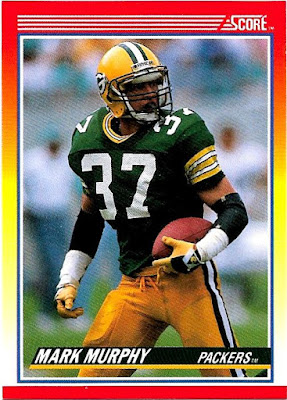 Mark spent his entire 11-year career with the Packers, and led the team in tackles for the four of those. 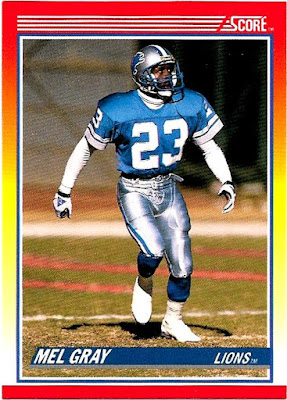 I just recently used Mel here to make my first physical custom card. It didn't turn out good enough to want to show off, but at least it proved proof of concept, so it wasn't a total wash. 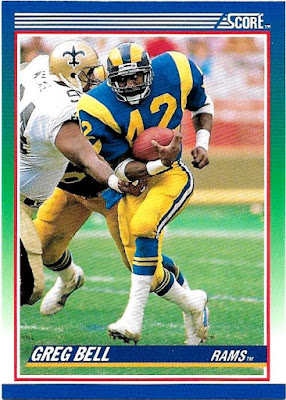 1990 would be Greg's last season, although Score was late to the party, as he spent it with the Raiders, not the Rams. 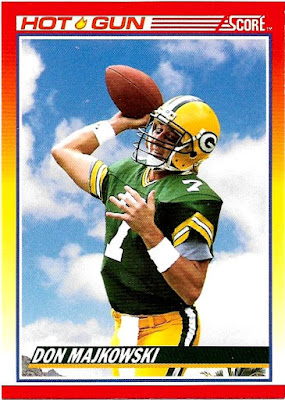 Not gonna lie, up to this point, the pack hasn't been too terribly exciting, but things are looking up now that we've hit the subset section of the pack! 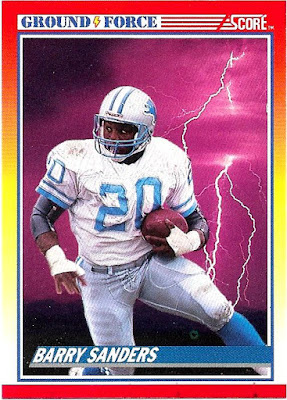 The subsets are where this set shines, I mean just look at how good this card still looks! And as an extra added bonus, my Barry came with some extra ink (bottom border) on it, so I'm just gonna go ahead and call this an eBay 1/1... and only serious offers will be replied to :) 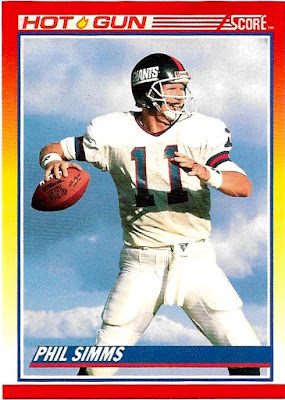 There's a joke here about Phil's head being in the clouds, but it's just not coming to me at the moment. 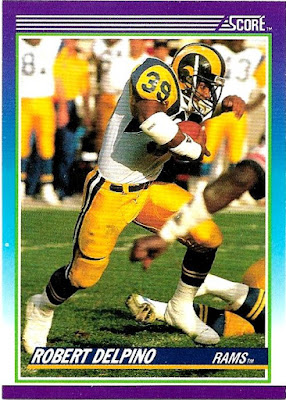 Hmm, nothing too exciting about Robert's six-year career, but I do see though that he was born in Dodge City (KS), which is mildly interesting, at least to me. 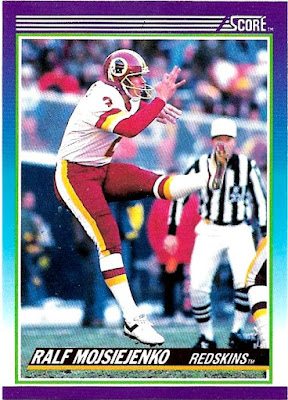 I know it's been talked about more than once on the blogs, but it's funny how you quickly you can begin to associate a player with a particular blog/blogger, in Ralf's case, I can no longer see him without thinking about Jason from Hoarding Cardboard. 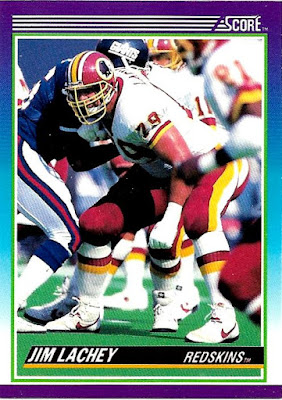 Remember how the first guy out of the pack was a member of the Redskins Super Bowl XXVI winning team, well, here we are on the last card, and it's of another fellow who was on that team too... interesting?

So was this the best pack ever? Probably not, but it certainly could've been worse, I did end up with four keepers (Butler, Dent, Sanders, and The Magic Man), which was better than nothing. I don't think I need any more packs of 1990 Score though, and hopefully I can remember that the next time I'm going through a bin of $0.25 packs.


Thanks for taking a moment to look at my page.
Posted by Jon at 9:13 AM