At least they weren't lost 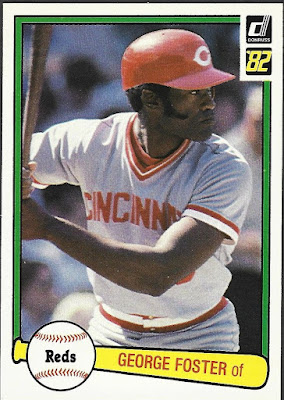 Like a lot of other folks, I claimed a few cards back during Nick's big "Dime Box Anniversary Giveaway Extravaganza" series of posts some months ago.
I'm usually a few days behind when it comes to blog reading/commenting, which isn't conducive with participating in giveaways. Such was the case here as well. I saw the first couple of giveaways days after they had dropped, and was not in the least bit surprised to find that there wasn't much left to claim by that point; Nick is a pretty popular fellow after all. My memory of such things has already begun to fog over, but I do seem to recall lucking into being early for at least two of the ten giveaway posts. In fact I think that those were where the bulk of my 11 claimed cards ended up coming from. 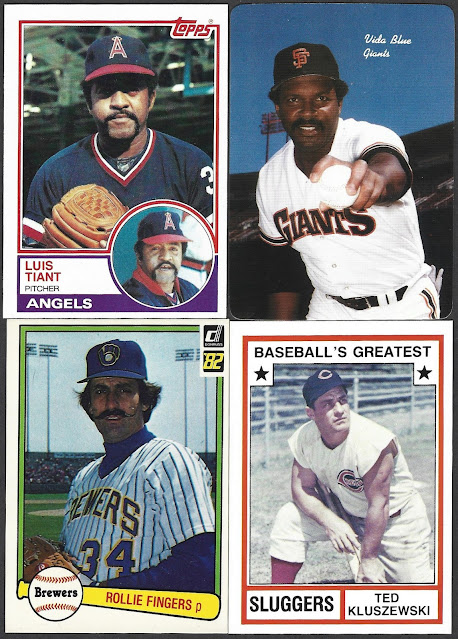 There was a period not too long after the series of giveaway posts that the blogs seemed to be nothing but people gushing over their various claimed goods. And given what, and how much, some of you claimed, I think you were completely justified in your gushing.
I had to wait a little longer than most folks to get my stuff, hence the lateness of a proper thank you post.
I'm not sure how many months passed since the extravaganza ended, and my cards arrived, but it was long enough that I had written them off as not going to show up. I figured that Nick had either forgotten about me, or that they had been sent, but had been "lost" somewhere along the way. Turns out that it was the former. It's not all that surprising either since Nick and I don't interact very often, and of the two possibilities, it's certainly the better of the two. I don't mind being forgotten about, but absolutely hate the thought of someone paying to send me something only to have it be misdelivered or pilfered while en-route. I was eventually remembered though, and was sent my claims, as well almost two team bags worth of  random stuff. 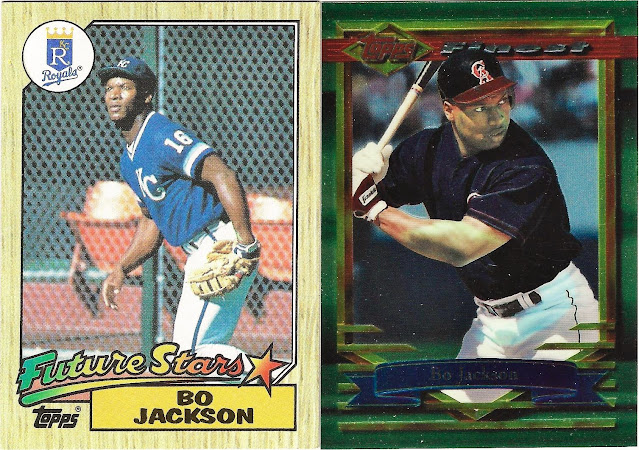 As mentioned, I claimed 11 cards, mostly just stuff for player collections, well, save for George Foster up top. I thought about collecting him, but don't really want to take on anyone else at this point. He will instead be added to one of my pages of 80's cards that I like for whatever reason, but have no where else to put them (I have pages like that for 50's-90's).
I was surprised to see this Finest Bo show up in one of those posts. I don't particularly care for the set itself, but have wanted this particular card for a couple of years now. 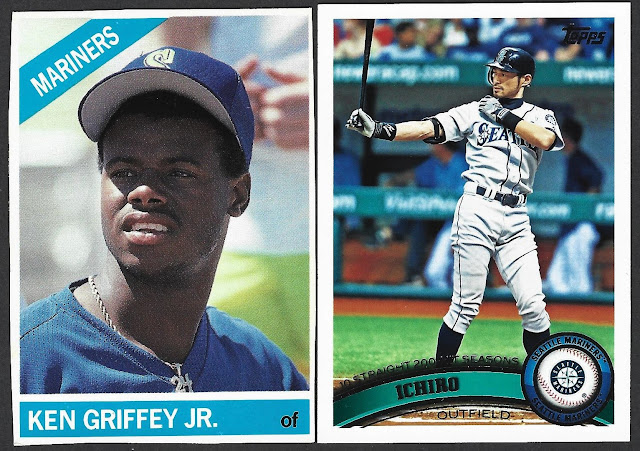 Junior is from the Topps Magazine. Those cards are very alien to me, so anytime I can get one of somebody I collect, I will. 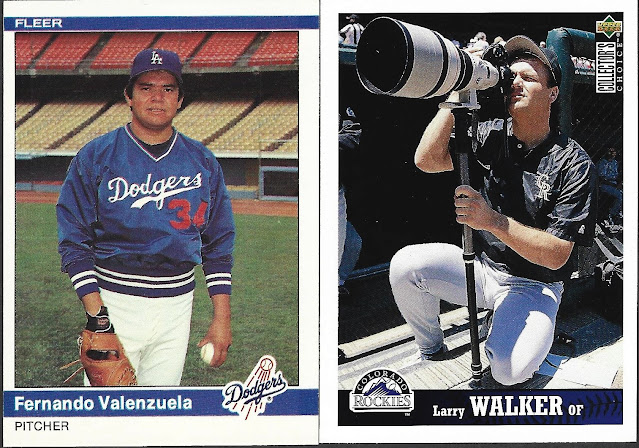 I like this Fernando card, though I couldn't exactly tell you why. I just do. He'll be added to an 80's page as well. And I had seen this Larry Walker on the blogs many times over the years. It too has been coveted for a while. He'll be making his way onto a random 90's page.
Personally, I would've been fine with just those, but as mentioned, there were two additional team bags full of mostly random stuff. I say mostly because there were about 25 more Ichiro's in there, and I'm pretty sure that those weren't random. 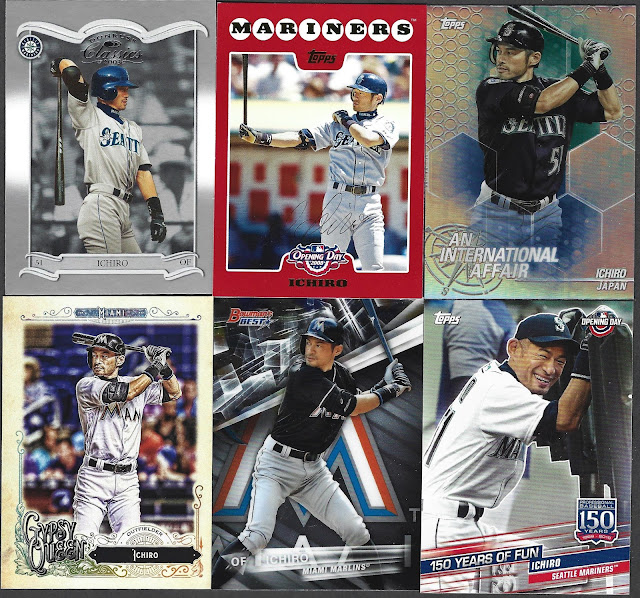 I didn't feel like scanning everything, so here's just a few of my favorites. I particularly like the Donruss Classics and the Opening Day next to it. With me not going to shows anymore, it's kind of a rarity for me to go find the Ichiro binder so that I can add some new cards to it. I think 23 of the 25 cards were new to me, which wasn't too bad. 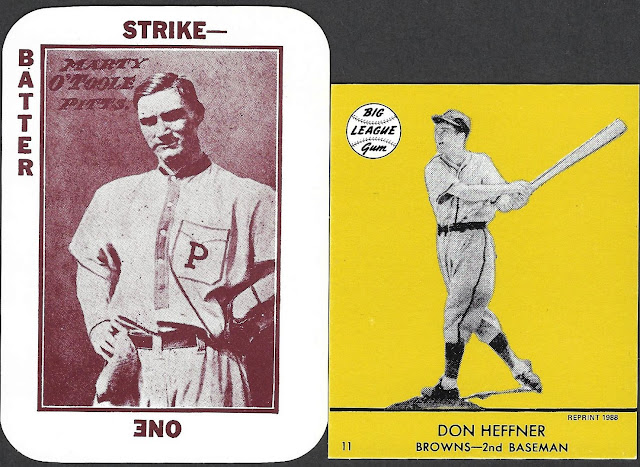 I don't normally collect reprints, but these were fun to find in with everything else. I've never even seen one of the Tom Barker game cards, real or reprinted, in person before. For a reprint, this one is on some really nice cardstock. 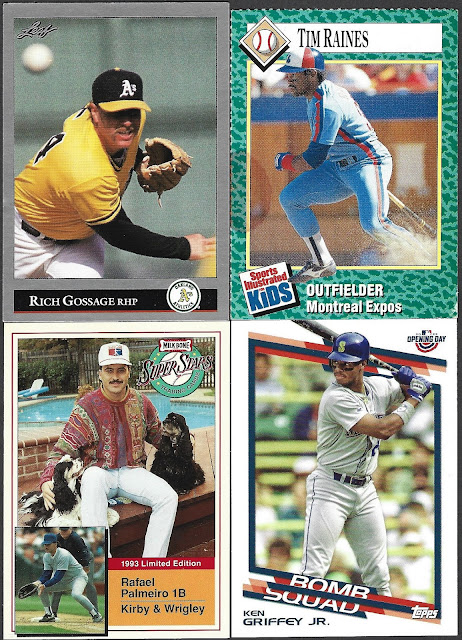 If I could go back and start collecting over, or even start back when I returned to card collecting in 2010, I would go after those SI for Kids sets, at least up to the mid 90's. A few of those cards are pretty pricey now, and I'd never pay $50 (or more) for a Tony Hawk "rookie" (I don't know if I'd even be willing to pay 50¢ for one), so trying to collect them at this point is pretty much out of the question. I feel like I really screwed up on that one.
I think a few of these other cards were duplicates from Nick's many mini collections; approaching baseballs? Players with animals? 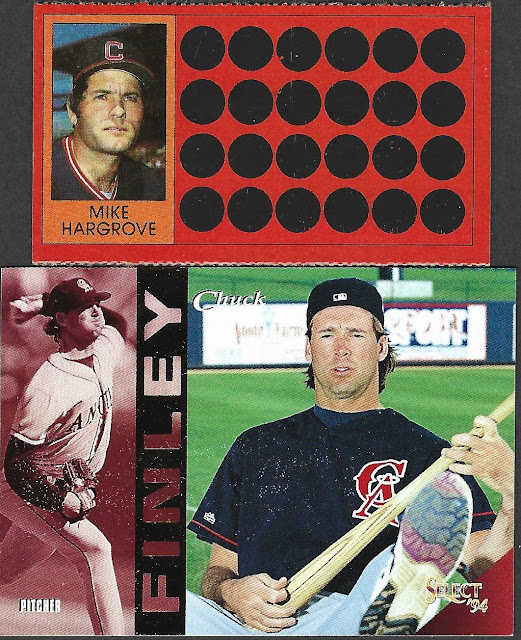 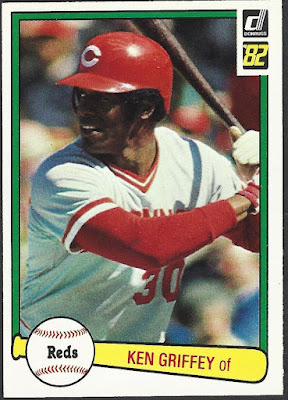 The mini-collection dupes were fun, and many will be added to binders, but my favorite of the extras was this Ken Griffey. I saw the '82 Donruss design showing just a bit while I was going through the cards and thought that it would be neat if it was Ken, or Dave Winfield, and did that slow reveal thing that Twitter tells me everyone who opens a pack these days does when there's a "hit" in the pack. I don't remember people doing that way back when, but whatever, I did it for this card; turned out to be a pretty good "hit" too. I probably you should've filmed it for the YouTube😊. Anyway, it's a neat card, and was a pleasant find amongst the stuff in Nick's team bag repacks.
Many thanks again to Nick for the cards. Considering I don't have any want lists up for public consumption anymore, he did really well in picking out extras (there was plenty more that were worth posting, and I totally would've done so if I could've gotten someone else to scan them all for me). I think going through these team bags was the most fun I've had while doing a card related thing this year, so I'm grateful for that as well.
Posted by Jon at 9:23 AM