Editor's note: I couldn't think of a title for today's post, so... yeah!

He had never had these at any of the shows that I've been to, so it was nice to see him roll something different out. The boxes themselves were separated by baseball, basketball, boxing, football, hockey, and wrestling.

I actually started with boxing because that's not a common category to see boxes of around these parts, unfortunately all of the cards were from the 1991 (?) Kayo set, and since I know where I can get a box for $8, which I have been thinking about trying, I didn't want to buy any singles just in case I end up splurging on a box.

Wrestling was next, all of them were from the 1990 Classic (series 1) set, and all of them had badly dinged corners. I knew that I probably wouldn't find anything, because I don't know who anybody is, but I tried the hockey box next, my attempt to try and find something for someone else didn't go so well, because again... no idea who anyone is? Of the remaining boxes, the baseball looked like it was the most packed, so that was next, and that's where I'll start with the pictures (all three of the remaining sports are covered here today though). 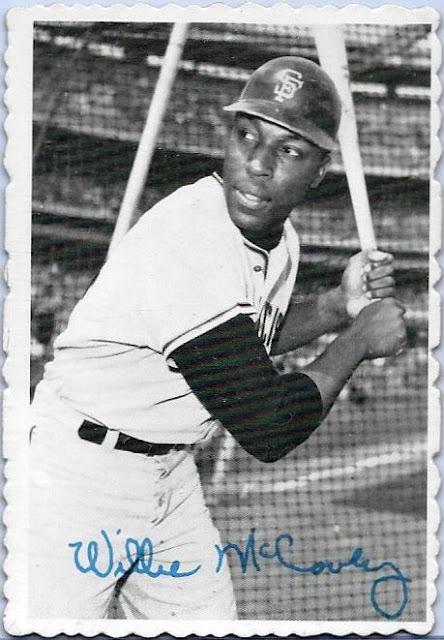 There was a group of maybe 25-30 of those newer deckle edged cards, Heritage, I think, anyways those are of absolute no interest to me, but I thought they'd still be worth going through, just in case I could find something that someone else might want. Much like the hockey cards though, I didn't recognize any of the faces, and the signatures weren't helping any either, so after the first couple I just kind of shuffled through them (they were in toploaders) in one fell swoop, while doing so I noticed one that didn't look like the rest. It took my brain a second to catch-up, but after it did I went back through and found Willie, who indeed wasn't like the rest. I've already got one of these, but he looks pretty darn good for being fifty years old, so I certainly didn't mind shelling out twenty cents for another one. 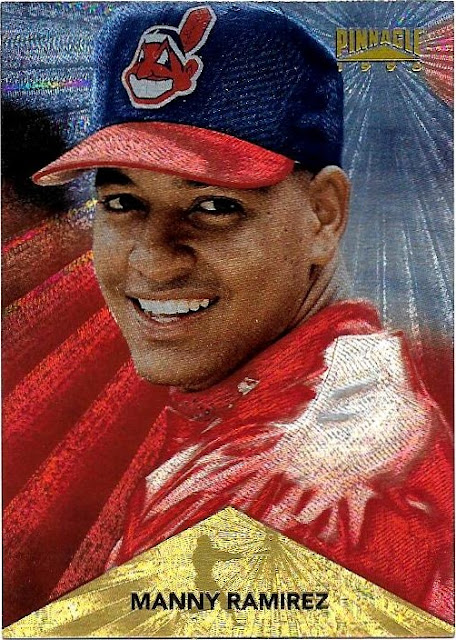 That must've been one heck of a bird! 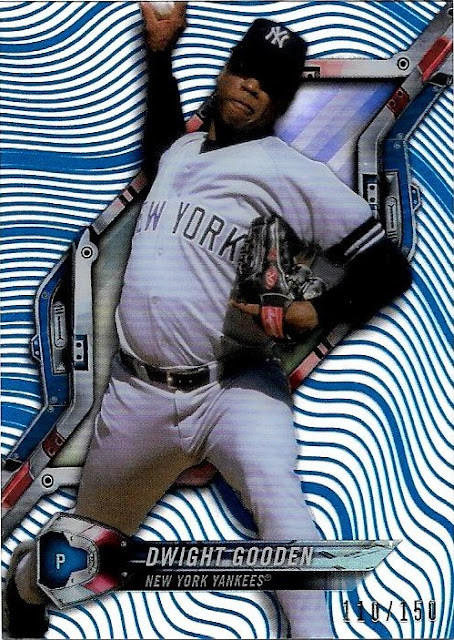 I'm not a big fan of the newer Tek baseball sets, but this card is kind of nice looking, although it helps too that I actually know who's on it.

These are from one of those Ted Williams sets. They seem to be serial numbered, but I don't know to what though, as it's just some random crazy high numbers on  the back. 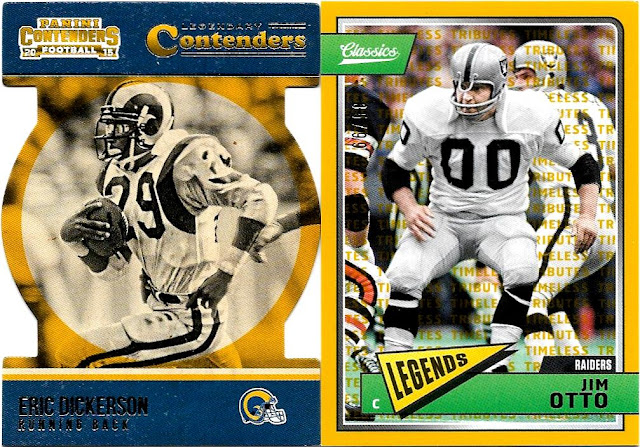 I'll grab just about any cheap Eric Dickerson that I come across, and won't leave behind any cheap colored legends from 2018 Classics, so these two required absolutely no thought before being added to the stack. 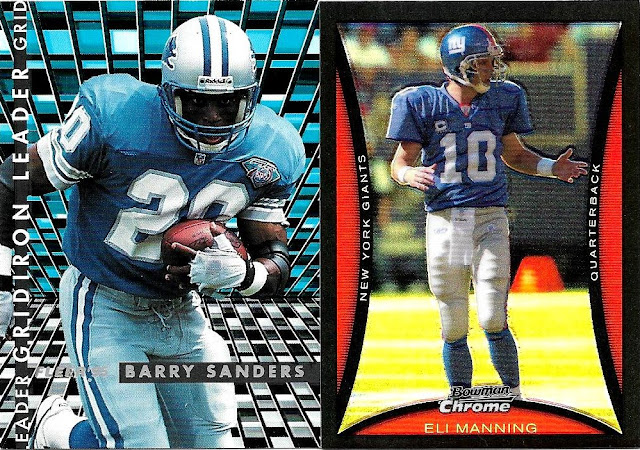 I think that this is my third copy of this Barry Sanders insert, it's considered to be lower end, therefor no one cares about it -- which is just fine by me, I'll keep grabbing these beauties, and every one else can have whatever the latest hot cards are. It's hard to tell from the scan, but Eli is a refactor, and a very nice one at that. 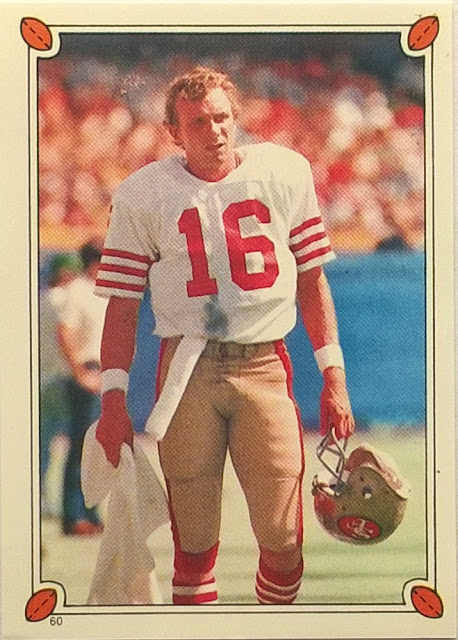 I don't see old stickers at shows very often, and even if I did I probably wouldn't be buying too many of them, but this one's alright, it's from '87 I think. 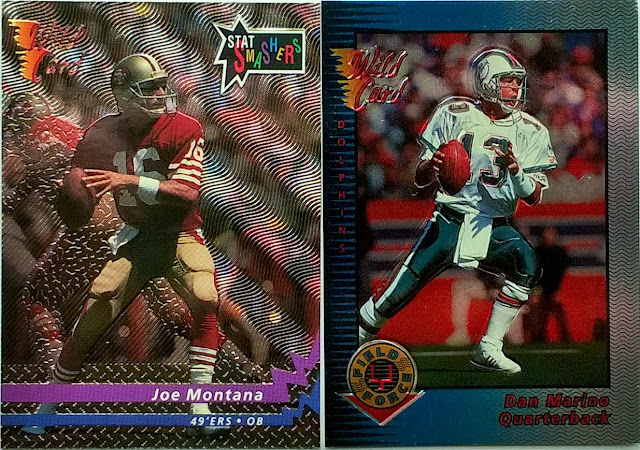 I never knew that Wild Card did any inserts like these, I really like'em, very difficult to photograph/scan though. 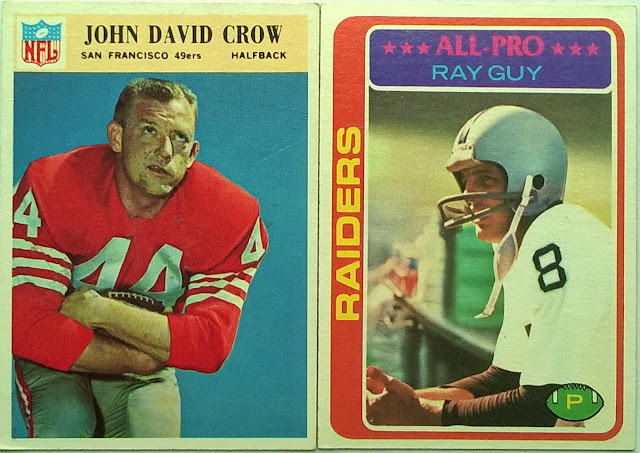 These were the only two vintage cards in the football box, at a quarter apiece there was no way that they weren't coming home with me. I don't imagine that too many people have noticed, but I've added some wantlists/what I'm collecting tabs back to the top of the blog. If by chance anyone has actually seen them, and has clicked on the football tab, you might've noticed that I've started a bunch of new player collections (inspired by the Reggie Roby chase). I only mention this because I think old John David Crow is going to be added to that list pretty soon, I've just got to go through some boxes and see if I have any more of his cards before I do so. 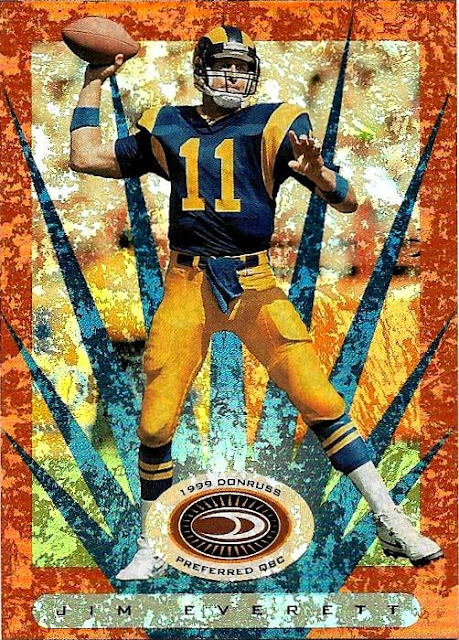 The QBC set is one that I still don't fully understand, I mean I think it's one of the one's that does the bronze or copper, silver, and gold tiers, but how it's broken down is a bit of mystery (to me). Apparently it also has a parallel called... uh... hold the line while I go look up the name again... okay I've got it, they're called Preferred Power! These Preferred Power's seem to be tiered as well, at least that's what it seems like to me what with them being serial numbered to different things and all. Jim here must be one of the more common one's though, as he's #'d to /500. Great looking card though, sort of refractory, but also sort of not. 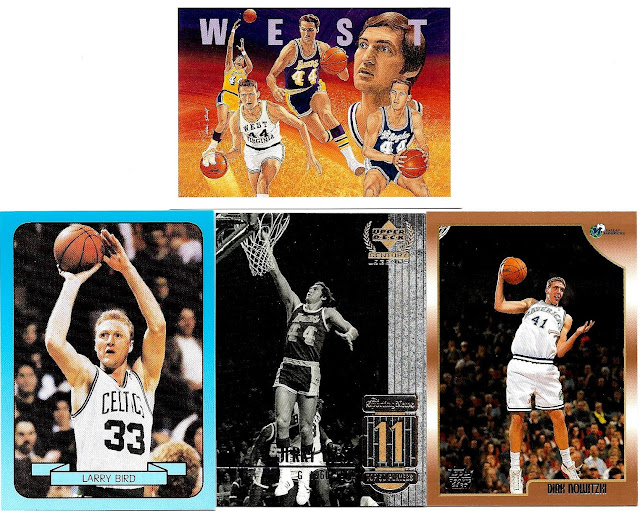 I know that they're considered "junk wax" at this point, but I still really like Upper Deck Heroes cards, especially those from the basketball releases. Twenty cents is a bit much to pay for a Broder, but I hadn't seen this Bird before, so I didn't mind overpaying a tad to get it. The late 90's Jerry west insert is just cool! And as far as the Dirk rookie goes, well, a lot of you already know that I don't give two poops about rookie cards, but for the price it was kind of hard not to grab it. 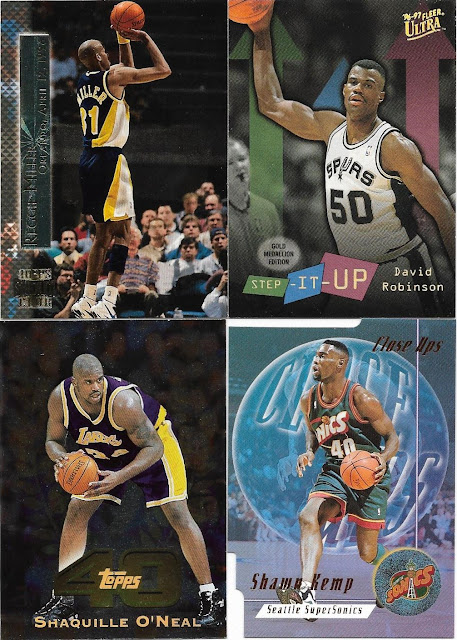 Cheap 90's inserts are always a good thing! I got all of these knowing that I probably already had at least one copy of each, at least that's what I thought until I got home and noticed that The Admiral was a Gold Medallion. I still haven't looked yet, but I'm pretty sure that that one will be new to me. As an aside, I really don't like the subtle Gold Medallion's (or Platinum's), that was a bit of misstep on Fleer's part, not that it really matters at this point, but I'm just sayin'.

Now that I've covered the nickel and dime (so to speak) stuff that I got from this fellow, I'm gonna save my "big ticket" item, also bought from him, for Friday. I'm not a big fan of doing the one-card posts, but I think this one will be worth it.


Thanks for taking a moment to look at my page.
Posted by Jon at 8:25 AM