A direct line to Rod

It took me a long time to get acquainted with Rod, and his blog, Padrographs, but now that I have, we seem to be making up for lost time, as he's sent three packages my way in just over a month -- and I've sent two back (I'm still working on the third).

You've already seen the first one, and today I'll be showing off the other one and a half (I'll explain about that other half below).

I've already stated multiple times that Rod's autograph frankenset is probably my favorite frankenset that's currently being shown on the blogs, not only because of the content, but also because there seems to be plenty of interesting cards that keep coming up for trade as the set continues to evolve.

Gary Garrison was multiple time Pro-Bowler, as well as an AFL All-Star, he's also another guy that's going to be added to my ever growing list of player collections. Tom Woodeshick was the third leading rusher in 1968, he also had an uncredited role in M.A.S.H. (the movie), and I've been thinking about starting a binder for athletes who have appeared in films and television, so if I do, he'll be going in there. And Al Denson appeared in two AFL All-Star games, which isn't that exciting, but Fuji sent me the regular base card last year -- so now I've got a regular version, and an autographed version, both coming from other bloggers, and that to me is pretty neat! 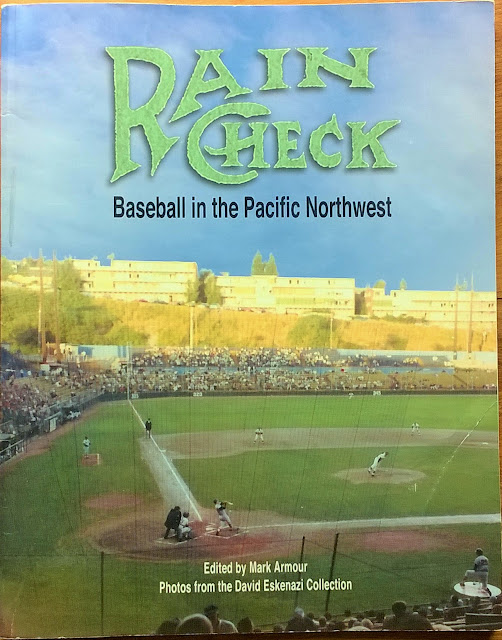 After a brief email exchange that was led off by a question that I asked on one of his posts, Rod recommended, and then sent, this book with the three autograph's. I haven't read it yet, but it is next in line, and I've been looking forward to it, so maybe I'll have more to say about it in a future post. 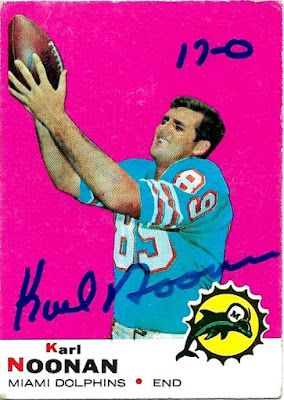 And here's part of the most recent PWE, it's the "half" that I mentioned at the beginning. The other card from this envelope is being saved for the next post, as it pairs nicely with another recent bit of generosity from someone else.

Karl Noonan was injured in the preseason, and even though he recovered in time to play, he wasn't ever activated for the Dolphins 1972 "perfect season". It's debatable whether or not someone who never took a snap during the season should be signing his stuff with "17-0", but either way it's a cool card to own, especially since the PWE that it, and the card that'll be shown on Wednesday, came from, were completely unexpected.

Thanks again for everything, Rod! I'm having a bit of trouble trying to keep up with all of your generosity, but I will hopefully have something of merit headed your way much sooner than later.


Thanks for taking a moment to look at my page.
Posted by Jon at 9:23 AM