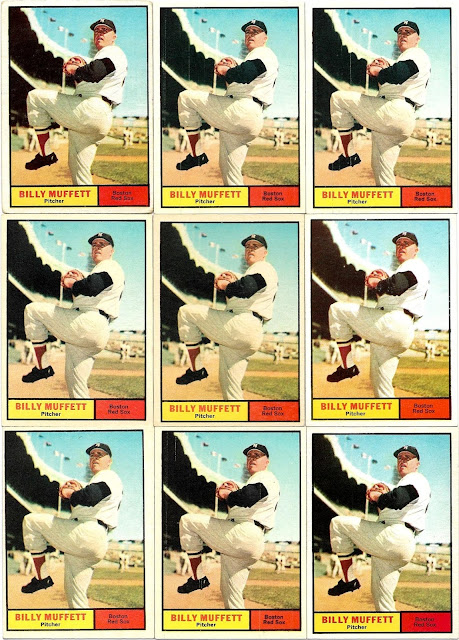 Like a lot of folks, I got a COMC shipment this month. As per usual, my shipment was made up of cards that had been accumulating since last year, 228 cards to be exact, although now that they're not offering free shipping during the Black Friday sale, this'll be the last time that I have this many cards shipped, as I will now just do so when the count reaches 100 and get the $5 credit for shipping them.

The good news is that I actually got all of my cards this years -- the shipments from the previous two years were both missing cards, cards that I got refunded for, which is nice, but it still sucks knowing that those missing cards were one's that I will never be able to find for those prices again.

The bad news is that I have five damaged cards in the shipment -- not from shipping though, no, this was the kind of damage that can't be seen in the scans, and wasn't noted, so whoever buys them doesn't find out about it until they're in hand. From past experience, I can tell that these were damaged by their automated sorters, but they'll never admit that their machines damage cards though (just ask all of the people who have sent in undamaged cards that were rejected later, after being sorted, for being damaged). Since these five cards total about eight bucks in credit (gotten from doing the Challenges), you can bet your sweet bippy that I will be returning them. The worst part though was that one of those cards was going to be for someone else, and it's fairly rare, so it was nice that they could damage something like that without even noticing it. Oh, and I said that I got 228 cards, well, it was supposed to only be 227... they sent me an extra card! Some people might take advantage of this small oversight and keep it, but I'm not one of them, it'll be going back with the damaged cards.

It probably sounds like I'm complaining, but I'm really not, aside for the damaged cards, I still got 222 cards that I probably couldn't have gotten cheaper anywhere else -- and as mentioned, everything was paid for with credit that was earned from doing the Challenges, which I'm definitely not complaining about, because without that I wouldn't have been able to afford about half of these cards. 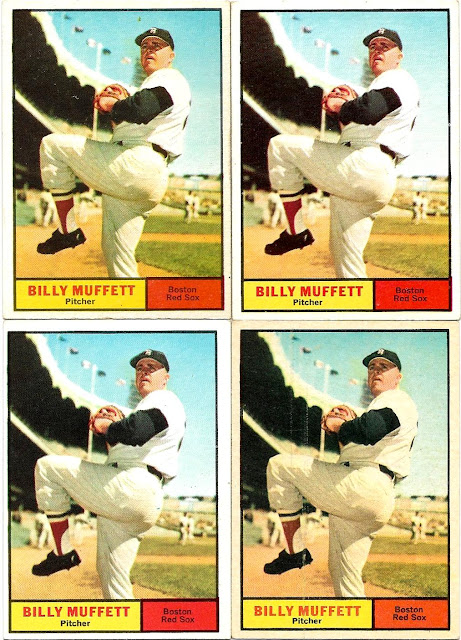 My accumulations in the past have usually been all over the place category wise, but this year everything pretty much falls into one of four categories: 90's inserts and parallels, player collections, non-sports, and... Billy Muffett! I'm joking, sort of. That fourth category is actually duplicates, although the more accurate description would be, "Multiple copies of cards that I really like". 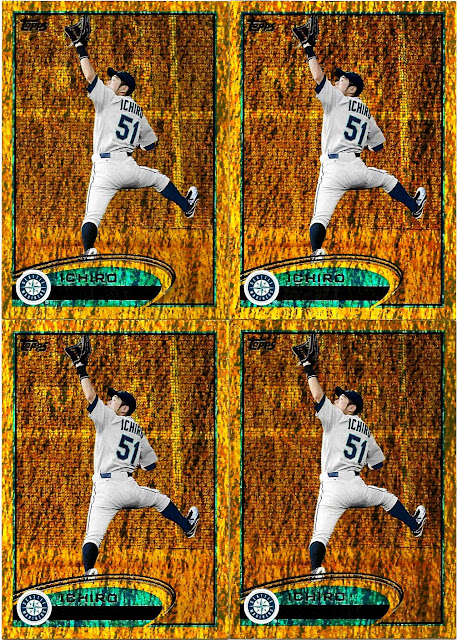 I still don't know what brought on this want to own lots of copies of the same card, and honestly, after a year or so of collecting like this, I don't really care. It's fun for me, so I'm just gonna keep doing it until it no longer is.

As you might be able to tell from the first two scans, the '61 Topps Billy Muffett is one of my favorites, and is one of the few that I actually remember to look for on fairly regular basis. I haven't put them away yet, but I think that with these new additions, I've got a shade over thirty copies now.

The "golden shower" Ichiro is another one of my faves, although I'm sort of hoarding all of the cards that contain this image from that year's chrome and flagship sets. 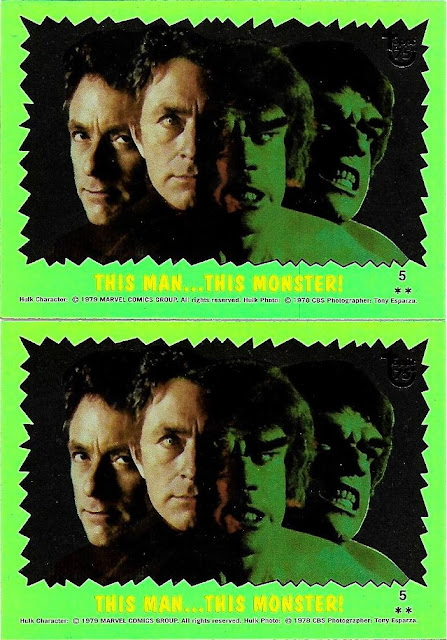 I only vaguely remember when the Topps 75th Anniversary set came out, I saw that it was basically just made up of reprinted cards, and sort of wrote it off. Then a few years later I saw post about them from Billy, from it I learned that they had also done parallels, which made the set a little more appealing since it wasn't just straight-up reprints anymore. I had meant to look into those parallels a little sooner, but it must not of been meant to be, because I didn't actually do so until just a couple of months ago.

I ended up getting about half dozen of the foils, which are the most common parallels from the set, but the only one that I got in duplicate was this Incredible Hulk. This card was already the best image from the original set, and I gotta say, I think it looks even better with the shiny (sort of refractorish) green border. 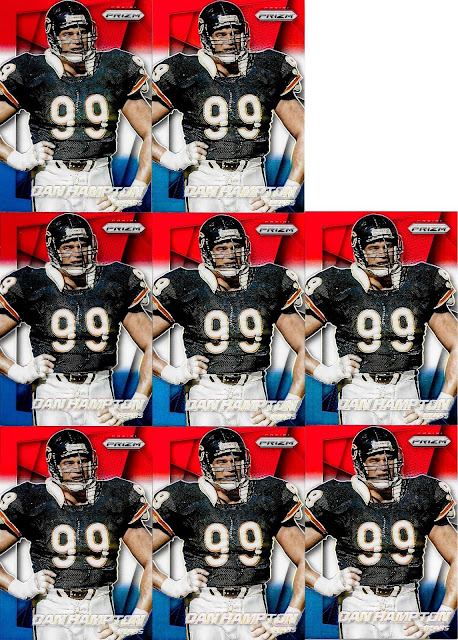 I must've gotten these either late last year, or earlier this year, because I don't really remember buying all of these. It it is one of my favorite cards from the 2014 Prizm set though, so I'm not disputing the purchase (and I'm too lazy to go back and double check it), I'll just have to assume that there was a bunch of them for dirt cheap prices... which prompted me to buy them all.

I spent a little more time looking at the 2015 Topps Tek set this year, than I had in previous years. I like the look of the set, but there's an awful lot of players in there that are of absolutely no interest to me, so what's a boy to do? Well, buy lots of copies of the cards I do like, of course! 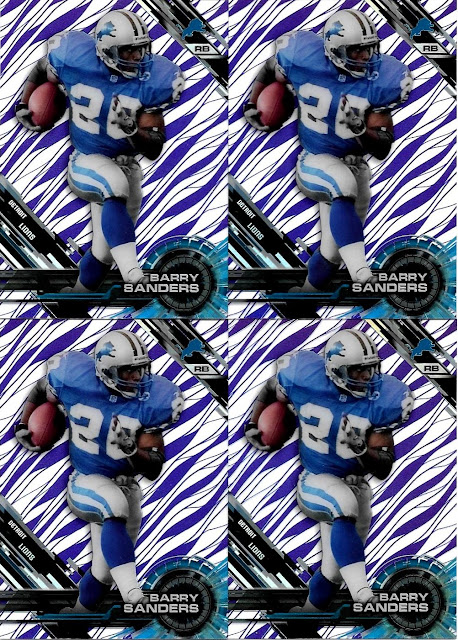 I haven't really looked into what the odds were with the various parallels, but I think that the purple one's might've been one of the more common, but even so, for less than a buck apiece, I considered these Barry's to be criminally undervalued. 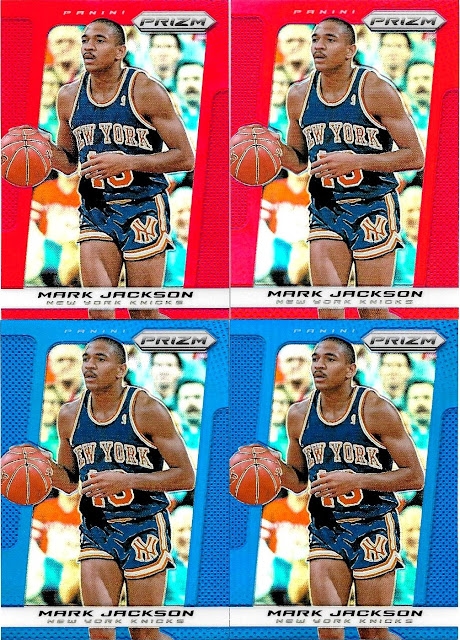 I'm not actively looking to buy lots of copies of every card in this post, Mark Jackson here being one of those, but I do like the card, and since no one really cares about this particular MJ, his cards tend to be very cheap... too cheap for me to pass up! 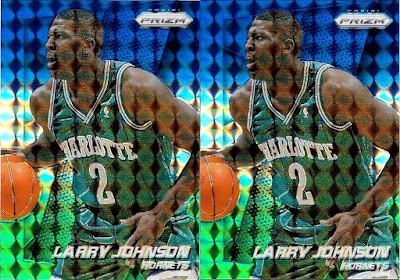 I loved LJ when I was a kid, but this too is another one that I'm not actively seeking, says the person who owns like half a dozen of them now.

I've said it before, but I really like the contrast that's created when a b&w image is put in front of a colored background. 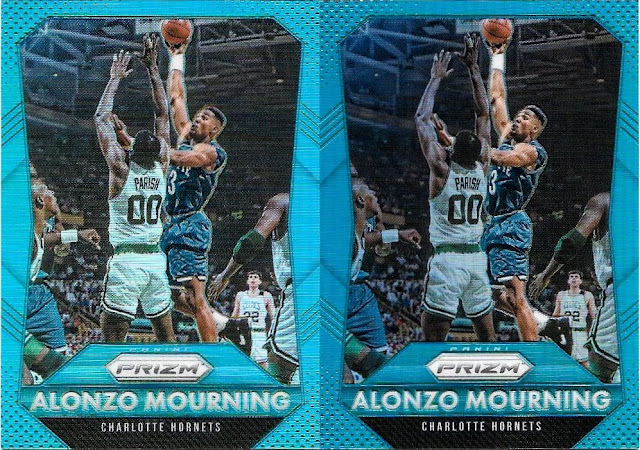 Shareef is another guy that nobody really cares about, but I collect him, so I might as well buy up all of the cheap copies of this wonderful looking card.

Some of these purchases have been inspired by Chris' matching color collection. Karl doesn't quite fit that bill, but it's close enough to still look really good in this shade of blue. 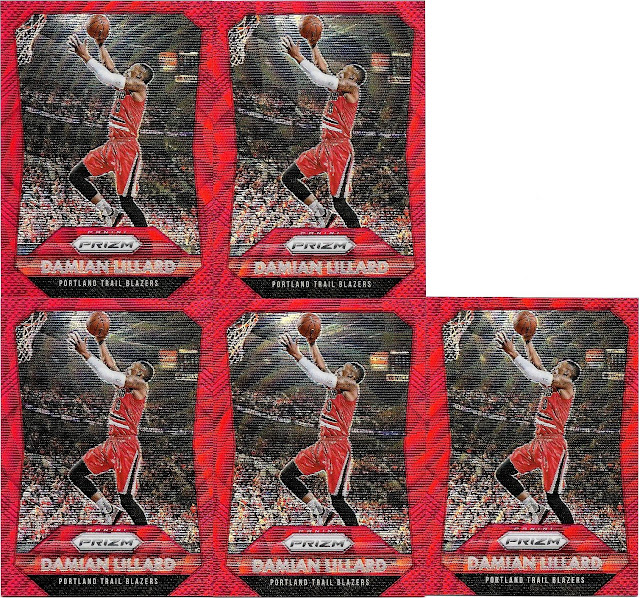 Damian Lillard is one of the few active players that I'm collecting, and of all of his cards that I've seen, this 2015-16 ruby red is by far my favorite. I've probably got close to a page of these now too. 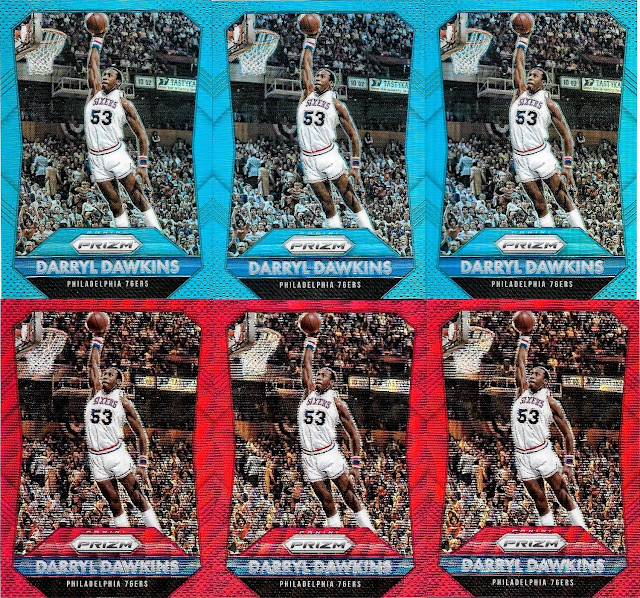 I've probably talked about this card more on the blog here, than anyone else has ever talked about any other card from the 2015-16 set. These are the only two colors that I'm actively looking for, mostly because I still can't decide which one looks better. By the by, have you noticed anything about the last five scans? There all made up of light blue and ruby red's. A lot of the singles in my stockpile were made up of those two colors too, something that I didn't realize until I started going through them. No matter how much I apparently like cards in these two shades, with the reds being numbered to /350, and the blues to /199, there is only a finite number of each for me to get, so some of these collections of duplicates will likely be capped off at some point, whether I want them to or not.

It'll probably be a while before I finish photographing and scanning the rest of my COMC order, so don't be looking to see much more of it any time soon. Other than those made at the two or three shows I will hopefully attend, I don't anticipate purchasing a lot of cards during the upcoming year, so much like this year, my COMC hoard will probably make up the bulk of the card content that you see here on the blog in 2020.

And finally, on completely unrelated note, Andy, from Stadium Fantasium, is running his second annual Rose Bowl contest. I think that he's offering something extra for promoting it, but I'm not gonna mention that I did so, as I don't care about getting something just for spreading the word. I do however care about him having a successful contest, so get yourself entered, not only will it be fun, but you'll also have a chance to win some really great (not hyperbole) prizes this year.


Thanks for taking a moment to look at my page.
Posted by Jon at 8:30 AM