Pink is the new orange

I'm not sure why October always ends up being so busy for me, but it does, and this year has been no exception. It seems like the days are just go, go, go, then come night time, I'm too tired to get anything done... especially blog posts!
I always have tons of ideas for Halloween related posts, but rarely get around to doing more than 2 or 3 of them, and this year has been no exception! Looking at my draft folders, I see that I've got 6 Halloween themed posts started, but at the rate I'm going, will probably only end up getting to 2 of them, 3 if I'm lucky.
One of the 3 posts that I've managed to finish this month was a 1-card pink themed post to try and help Brian spread the word about his annual Save Second Base event. It was nice to be able to try and spread the word (even though pretty much every one already knows about it), but it wasn't what you'd call a great post (1-card posts rarely are), a fact which I acknowledged in the post, and said that I'd try to do one more for him (and his cause), something with a little more eye candy if you will. Well, I had a spare hour earlier in the week, and found myself possessing the want to look through some cards, more specifically, to look for some 'pink' cards.
I ended up finding enough for a top ten post, of sorts. It's probably more like "Here's ten pink cards that I own and am showing in no particular order, half of which have already been featured on the blog at some point". It should be noted too that I didn't even need to look through any of my baseball player collections (barely touched the football ones either) to reach my goal of ten cards, so hopefully since it's for a good cause, all of you 'baseball or bust' types will still stick around 'til the end (commenting wouldn't be a bad idea either, especially since each one equals a $1 donation from Brian).
So without further ado, here's ten 'pink' cards that I own, and very much like...
The '71 basketball set has a number of notable pink cards in it, especially since it's the background color for both the Lakers and the Pacers (among other teams), so you've got all-time greats like Wilt, West, and Baylor representing pink for the Lakers; and rookies of guys like Roger Brown, Mel Daniels, and Billy Keller on the Pacers side. And yet, my favorite pink card from the set is this Em Bryant. Pink aside, it's one of my favorite cards from the set, period! I'll even take it a step further and say that it's one of the quintessential 1970's basketball cards, at least from an aesthetic standpoint. Disagree? Prove me wrong!
You had to know that there was going to be a Progressions in here, right? Biz is my favorite of the rainbows that I'm trying to build, I've got 3 of the 4, and no, I can remember which one that I need off the top of my head (it's not like your sitting on one of these anyway).

I hate the thought of ranking things that people have sent me over the years, and would never do so, but still, I sometimes find myself reminiscing about the package that RAZ sent me a few years ago, it truly was that good. This Mochi Miyagi (no relation to Mr.) auto was one of the many great items in there.
P.S. RAZ, if you see this post, please come back to us. I know that you're on Twitter, but it isn't the same.. not even close!

Did you watch Adventure Time? No? You should, it was a great show. It's not too late either, it still holds up, and will continue to do so for quite some time. These Holiday Foils were exclusive to the retail blister packs a bunch of years back. I couldn't find any of them in stores, so I bought a big lot of packs on eBay, maybe 10-15 packs, and since each blister pack (which contained two retail packs btw) had one of these foils on top of the packs, I ended up with a huge stack of them. For those that don't know, the show was set in a post apocalyptic world, where many traditions have been lost (big surprise, right), including Christmas. This card is from their two-part Christmas episode (Holly Jolly Secrets), in which the back story of one of the main characters is finally revealed, and Christmas is "re-created" (rediscovered ?), albeit in a slightly different manner than most of us are accustomed to. The episode had all kinds of heart, and is still very popular amongst the shows fans. The card has all kinds of heart too, even though it's foil-y goodness has been rendered null-and-void by the scanner.

Other than Shawn Kemp's 1990-91 Fleer RC, I don't think that any other card has been shown on the blog more times than Merlin's Topps RC (not his true RC, but the 'geniuses' over at Beckett don't acknowledge that), so who am I to get in the way of a good cause, and not show it again :)

Cyd Charisse has very few trading cards, don't ask me why though. If I was in charge, she'd have many. I freely admit to having a long standing crush on her, so I may be a bit biased. 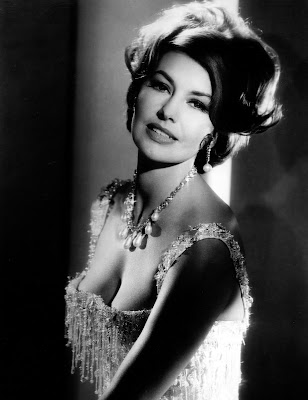 See, I couldn't help it! Although, this photo does fit the theme that Brian's October posts tend to follow, so I'm just playing along, nothing else. It would make no sense for me to do so, but I've thought of doing a top 10 most attractive actresses/entertainers post before. If I ever did (I won't), Cyd Charisse would easily make that list.
Is this a stretch as far as pink cards go? I probably wouldn't have used this one had I not seen an eBay listing for a copy the other day (during an unrelated search). Rookie cards seem to have gotten big again, and this one appears to have gone up in price a bit since I bought mine 5-6 years ago. Unrelated, can we refer to those as the 'good old days' yet?

This ones a bit of stretch, as it's more of a red card, but Ellie Mae is wearing a pink shirt, and does have pink ribbons in her hair, so? This is one of my favorite autographs from the Golden Age sets, so anytime I can find an excuse to show it, I'm going to. I watched a couple of episodes of The Beverly Hillbillies this past week, and while it's not my favorite program ever, I do enjoy a few episodes here and there.
Watch out ladies, Brother Bruti is on the prowl!
I haven't been a wrestling fan for quite some time now, and don't collect anything wrestling related anymore either, but the '85 Topps set, as well as the subsequent '85 O-Pee-Chee series 2 set, were amongst the few things that I held out back when I sold my wrestling collection. As far as wrestling cards go, those were the tops for me, it's been downhill ever since.
Masters of the Universe has gotten big again too, and I'm thinking that it's like the tenth time that it's done so now? It's cool that so many people are into the various re-hashings, but I only care about the original. The new stuff just doesn't appeal to me, but of course I could say the same thing about everything from my childhood that's been reimagined in recent years, it all feels second rate, and I choose to have no part of it.
If by chance you haven't seen what Brian has been doing, I would highly encourage you to do so. He's doing lots of  good things, raising lots of money, and bringing awareness to a terrible disease. His dedication to the cause is very admirable, and he deserves all of the accolades that he has been getting.
Thanks for taking a moment to look at my page.
Posted by Jon at 8:34 AM