Bringing light to a dark and stormy weekend

I don't know what the weather's like where you are, but I hope it's better than it is here right now.
We're getting the a$$ end of some hurricane this weekend, so there's been rain, rain, and more rain. If I didn't know any better, I'd swear I was back in the good ol' PNW. It's not very often that I'm stuck inside for a whole weekend, but that's how it's looking like it's going to be. With this in mind, I might as well use part of my Saturday morning to get a long, picture heavy post out of the way.
My mailbox has been getting a lot of action as of late (lucky mailbox 😉), most of which has been thanks to fellow bloggers, but I've also made a few small purchases in the past couple of weeks too (had to spend that $0.11 in eBay Bucks), so I've had a lot of cards piling up, many of whom were needing to be scanned (joy!).
Kevin, aka The Diamond King, recently did one of his Diamond Nine giveaways, and even though there was a bunch of "hot" young players up for grabs, I just wanted the old Bo that was being offered. I don't think I've ever owned a card from the '94 Upper Deck SP set before, it's a good looking set, which I'm assuming is like the basketball version, in that there was a die-cut parallel in every pack, if so, I'll have to look for the parallel of this card at some point.
Thanks for the card, and for doing the giveaway, Kevin! I've finally got a package ready for you, which will be headed out either Tuesday or Wednesday morning.
***************************************************************************

My time spent on eBay has been very limited so far this year. Now that everyone's collecting investing in every single item that's come out in the last 40 years, eBay just isn't very fun anymore. I spend maybe an hour a month looking at cards, and maybe another hour looking at non-card stuffs (mostly toys), but rarely find anything worth getting excited over, especially when I know that whatever it is will be way out of my price range within hours of me finding it. That being said, I did find something (I can't remember what it is now) that caught my eye recently, and after clicking on the sellers other items, found a bunch of other items that caught my eyes (all three of them!).
thatsportscardguy had a whole mess of *Set Break* auctions going, most of which were of the football variety. All the listings said *Set Break*, but I think it was mostly just big names and rookies from various sets that were being *Broke*. I remember being blown away by the look of the inaugural Action Packed set back in 1990, to young me they looked like just about the fanciest trading cards that had ever been. The packs were kind of expensive, so I never got too many of them, but have always liked the set. Now, thirty years later, I've just learned that they did a 30-card test set in 1989, which is what the three cards above are from. The set is made up of Da Bears, Giants, and Redskins; and other than the numbering, appears to be exactly the same as what would come out a year later. I tried to get Art Monk too, but wasn't successful in that attempt. 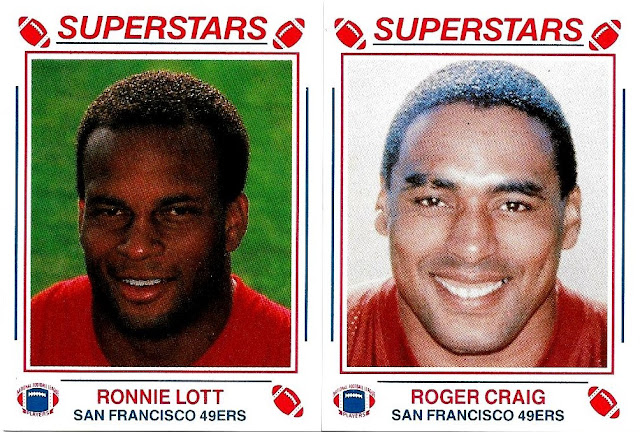 I had never seen, or heard of, 1990's MSA Superstars set. I don't know how it was distributed, or how many cards are in the set (nor do I care), but I saw a couple of guys I wanted, and got two out of the three (Bo Jackson just wasn't meant to be this time). 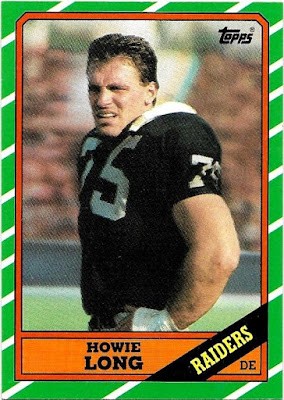 Some of you might recall that I did an anniversary Free Stuff Friday a couple of weeks ago, and one of the claimers was a fellow called David, who I hadn't seen around here before (or at least not one who had commented before), but was still glad to have participate. Other than some of my most frequent exchange partners, most people who claim stuff don't ever send anything in return, which is fine, since I don't care about that, I'm only mentioning it because, David, a first time claimer, surprised me by sending something in return. These three Reggie's weren't needed, but are appreciated nonetheless. I have a few copies of each of these now, and certainly don't mind adding more to the hoard, especially the '89 Pro Set and '91 Fleer, which by the way, is the best looking card from that set -- it's a well known fact, don't try to argue it.
Thank you for the Reggie's, David! A few more copies, and I'll have a full page of two of these :)
************************************************************************** 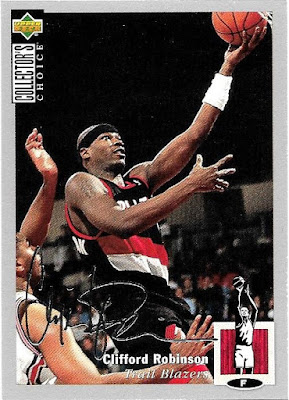 Like with Kevin, I owe Kerry, he of Cards on Cards, quite a bit right now. So when he did his last FSF, I didn't want to claim anything, and I tried really hard not to do so, the problem was though, he had some really cool cards up for grabs, and the ones that I liked were not getting claimed. So, against my better judgment, I sent him a message and asked if he could hold hem aside, provided no one else was interested in them. Kerry being Kerry, didn't care that I was already in his debt, and immediately took the cards out of circulation.
I'd say that I was surprised that these three inserts remained unclaimed, but there's only a handful of football card collectors amongst the bloggers, so I'm really not. I had never seen the '92 All-Pro's before, and I don't if it's because I had never seen one in person before, or if it's just that Fleer used that different of a printing process to make them, but they've got a really unique look to them. The middle section almost seems translucent, but not, if that makes any sense. 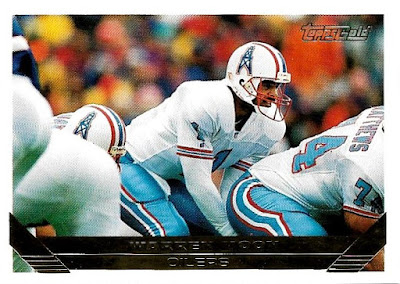 This gold Warren Moon went unclaimed as well. I think I appreciate the Topps Golds a lot more now than when they were new. Of course back then I was always working on the sets, so the one per pack parallels meant that I was potentially getting one less card for the base set. The golds would be relegated to the back of the binder, and their set was never even close to getting finished. 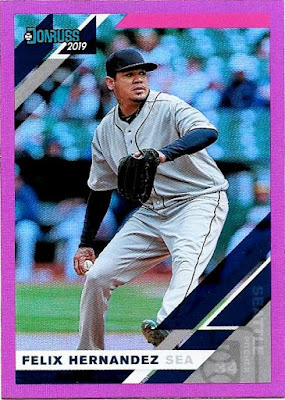 A couple of extra cards were tossed in with the freebies, the first of which was a very shiny PINK King Felix. I'm not overly fond of Panini's Donruss cards, but it's a card I didn't have, and probably wouldn't have bought on my own, or in other words... the perfect kind of free card! 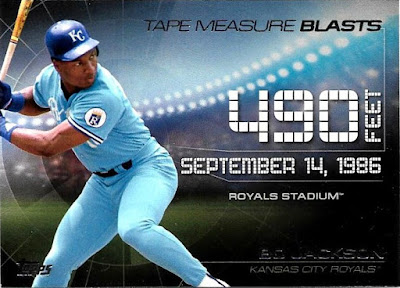 Sometime during my two-month hiatus this past summer, Bo, the lover of all things old behind, Baseball Cards Come to Life!, ran a Free Stuff Friday. Being on hiatus, and only paying cursory attention to the blogs at the time, I missed it. I can't remember who it was now, but it was someone who didn't miss the giveaway, posted about their claims, one of which was a 1980 Topps Fred Dryer. This post I read, and left a comment something along the lines of "I would've been all over that Dryer had I seen it". Apparently Bo saw this comment, and went out of his way to retroactively include me into his giveaway, by sending a sextet of '80 Topps, including another copy of the missed Dryer.
A needed, and very much appreciated Lyle Alzado was also tossed in, as well a nifty Cliff Branch, who I've been thinking about adding to the list of player collections.

The A-team was impressive, but the B-team here isn't too shabby either, all of whom are familiar names, with Joe making prank phone calls being my favorite.
Thanks for the great group of cards, Bo! This was a surprise mailing at it's finest.
***************************************************************************
I'd also like to point out that I've recently received cards from Jim (gcrl) and Julie as well, but those will be part of larger individual posts (I have a backlog of cards to show from both of them).
And as far as purchases go, I have one more small card order that did on eBay, which is currently hung up in some sorting center somewhere, and my biggest purchase of the year, in terms of the coolness factor, just arrived a couple of days ago. It's not card related, so most people reading this won't care about it in the least, but I was pretty excited. I'll need a day with some good sunlight so that I can a bunch of detailed pictures, so I don't know when I'll be able to that post, but in the meantime, I will provide one small clue, by saying that it's from one of the more well known 80's toy lines, a toy line who's figures were rather diminutive in size, but made up for it with their bulk :)
Thanks for taking a moment to look at my page.
Posted by Jon at 11:16 AM