A prize pack, Black Friday, a new collection, snow, and the TCDB 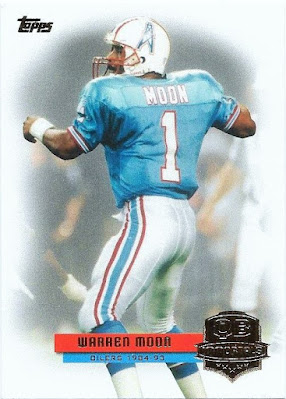 Ever since I finished organizing my collection earlier this year, I've been making a concerted effort to limit my acquisitions to things that I'm currently collecting, and leaving all of the 'maybe someday' stuff for everyone else.

I've done pretty well with this so far, but have slipped a few times, a couple being by accident (e.g. weakness), and one by choice.

The by-choice slip occurred via a Halloween themed giveaway that Elliptical Man was running back at the end of October over on The View from the Third Floor.
Given that the prize was a mystery football pack, I (now) normally wouldn't have entered, BUT, it was Halloween themed, and I just couldn't not get in on it. Besides, I figured that I'm collecting enough players now, that the odds were good I'd end up with at least a few guys I collect -- especially since it was mentioned that some of them would be of the retired variety, and that's pretty much what I collect, so...
My hunch paid off as I did end up with a couple of new cards for four different collections, as well some guys that I don't necessarily collect, but am not opposed to getting cards of... 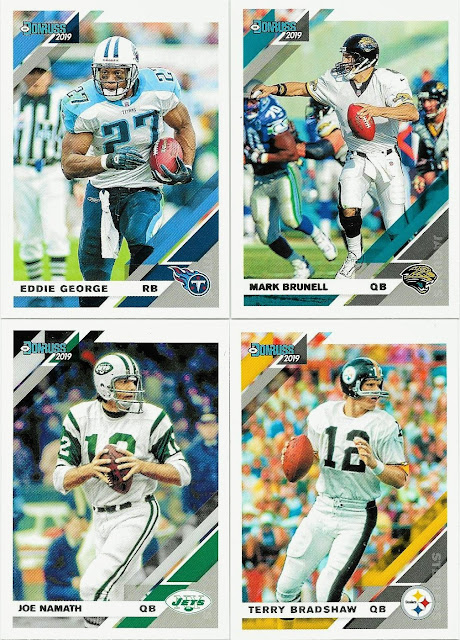 I've seen some Donruss packs opened on the blogs, but didn't realize that Panini had been going so heavy on past greats in recent years. 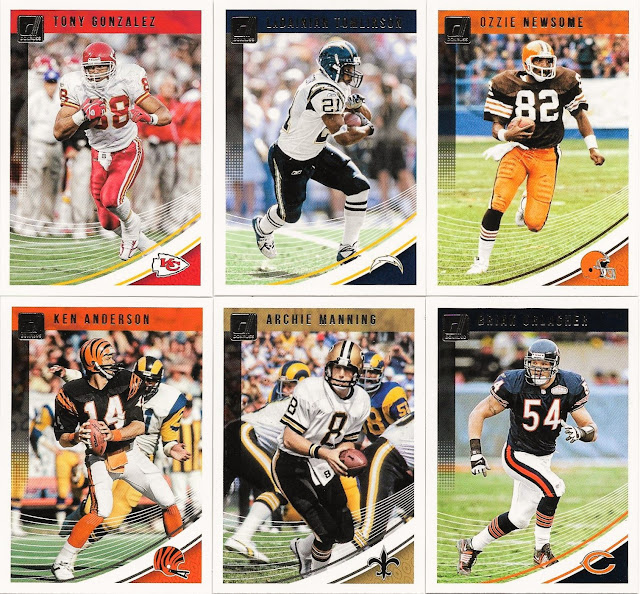 Not too bad of a group here, huh? I know that Brian Urlacher said something(?) recently that offended some people with too much time on their hands, and we're all supposed to hate him now, but I didn't see what it was, and honestly don't really care. He was good at the football, and I'm not upset over receiving this card.
Many thanks to EM (or Em - short for Emmett?) for the cards, and the series of giveaways. Maybe at some point I'll find out what his real name is, and what he collects, so that I can try and send a proper thank you.

Despite all of their problems, COMC still went ahead and ran their Black Friday/Cyber Monday sale this year. Did anyone buy anything from them this year? They labeled this year's sale "Our Biggest Sale Ever!". I don't know about that, I remember much bigger, and better, sales from them a few years ago.
I wasn't really looking forward to the sale this year, and suspected that the deals weren't going to be nearly as good as they have been in the past, but still went and took a look around after breakfast on Friday morning. I had about 50 cards in my watch list, and majority of them weren't discounted all that much (6% off, really? Get the f*ck the outta here!). And I think most telling, none had sold yet, which I can't remember that ever happening before.
I had plenty of credit to play with (more on that in a second), and to my surprise, actually had some fun with the sale this year, probably the most card related fun I've had in months. The discounts certainly weren't as good as they usually are, but as always, there were some deals to be had... you just had to look really hard for them!
I ended up purchasing 15 cards between Friday and Monday, which is the least I've ever gotten during one of these sales, but I did get some really great cards, and didn't have to pay for them out of pocket, so I can't complain too much. Now if I could just get the 148 cards in my account before 2022!
I also won an eBay auction from COMC on Sunday night, which I believe is now the fifth auction I've won from them. I always forget to check their listings, but should do so more often, especially since you can pay for them with your credit and avoid the shipping fees. Because of all of their shipping woes, I, like most people, haven't been able to get my stuff when I would've liked, and as such have had some cards sitting in my account for about a year now. After going through my inventory recently, I found two cards that aren't really doing anything for me anymore, so I decided to put them back up for sale. Both of the cards were won via auctions back in January, and neither had any current comps, so I just kind of had to guess on the resale price. Turns out my prices must've been pretty good, because both cards sold within a week of being relisted. One I bought for $2.80, and sold for $15.00. While the other was bought for $16.75 (I really wanted this one at the time), and ended up going for $49. So needless to say, I had a little bit of play money for this sale.
Normally I wouldn't show a card that I don't have in hand yet, but I went a little splurgy on one (technically two, but one was much more expensive than the other), and was kind of excited to get it, so... 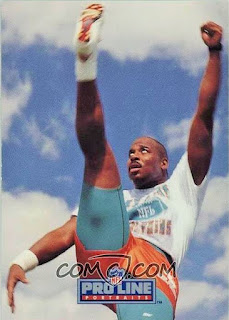 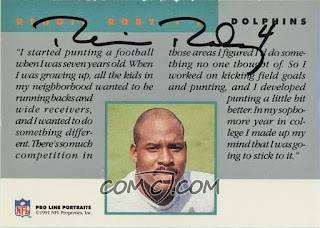 When I first decided to super collect Reggie Roby, I identified two cards that might be a little difficult to acquire, his 1992 Wild Card 1000 stripe, and his 1991 Pro Line autograph (his only certified auto by the way). I've yet to see the Wild Card 1000, but have seen two autos, this one, which I've been watching for over a year now, and one that sold on eBay earlier this year. I let the eBay example go, because it looked like the pen had started running out of ink when it was signed. Despite that, it still sold for around $13 with shipping. This much better copy has been sitting on COMC for $35 for over a year, which was a bit much to me. It was on sale last BF, but still was too high for me to pull the trigger on. This year it was on sale for $18.25 on Friday through Sunday, and I woke up Monday morning to find that it had gone down a little bit more to $15.25... I could resist no longer! I'm still not sure if it was a good price or not, but the signature is strong, and it's one of the biggies checked off the list, so I'm content with the price.
P.S. I'll probably be showing this card again when I get it. I'd like some images of it on the blog without the the COMC watermark.
*****************************************
In somewhat of a related topic, I've made no secret about the fact that I don't pay much attention to current sports happenings. I'll read an occasional recap, and maybe watch a set of highlights here and there, but that's about it. That being said, I've been following the updates on Alex Smith since his terrible injury a couple of years ago (and no, I didn't watch that video). And even though I don't have a vested interest, I've been kind of hoping that he would recover enough to lead a semi-normal life post-football. Given the seriousness of his injury, I really didn't think that he would ever play again, even if he did say that's what he was striving for. And here we are just a couple of years removed from him nearly losing his leg (and his life), and he's back playing again, crazy! I've actually followed his last couple of games, and am amazed at how well he looks out there.
After seeing some interviews with him (and his wife), and realizing that he's a fairly decent human being off the field, I sort of decided that I wanted to start collecting him. The only problem is, being a modern player, he's got like 8 trillion cards out there, and I don't want to deal with all of that, so what to do?
Well, thanks to me trying to find something a few weeks ago for someone else, I stumbled upon a forgotten card show purchase from a few years back... 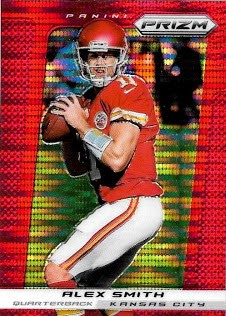 ... and it hit me! He's played for the 49ers, Chiefs, and now the Redskins (yeah, I said it, get over it!), all of which have red in their team colors, so why not just collect Alex Smith red parallels? So that's what I'm doing now, and was able to jump start this collection with a couple of BF purchases, including one that was numbered to /25. Looking at his card prices, it would seem that the influencers aren't telling people to buy his cards, because even some of his low-numbered stuff is still very affordable. I think that this is going to be a fun collection.
**********************************************
Have I ever mentioned just how much I hate snow? 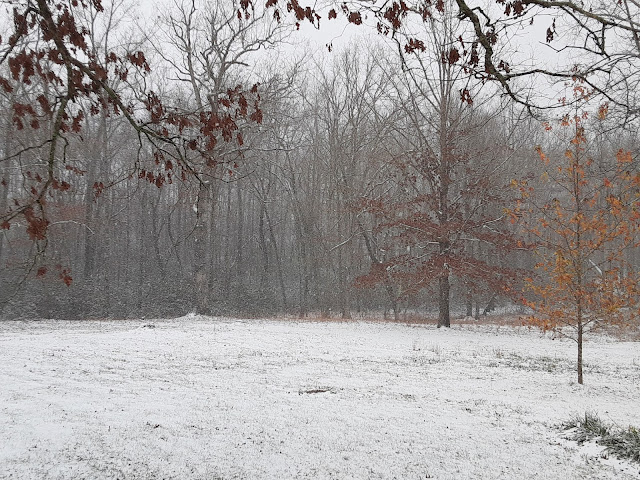 Up until just last Friday, the highs around here had still been in the mid to upper 60's (with some some 70's sprinkled in), which has been nice, because I hate cold weather. I'm an economy model, and don't have any extra insulation, so when it's cold, I really feel it. Now all of sudden this week it's officially butt-cold out there, with a few days struggling to get above freezing for the highs, and some balmy low 40's later in the week. And don't even get me started on the lows, 14°? I don't want any part of it! 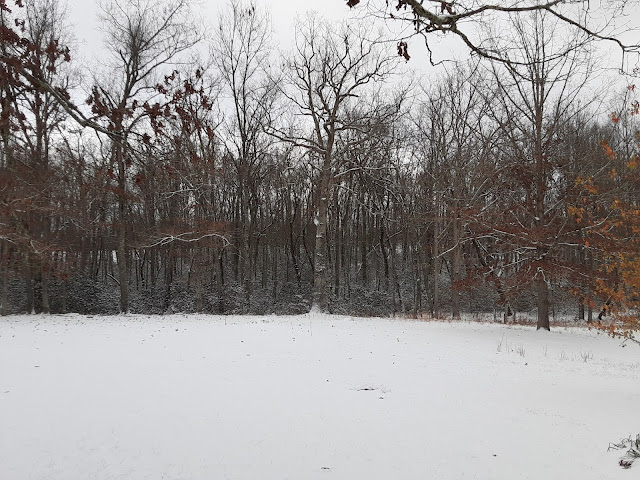 And I realize that 2" of snow isn't very much, but any amount of snow is too much snow for me. If I live long enough, I can easily see myself needing to move even souther (I know, it's not a real word) at some point, somewhere that never sees ice and snow. Belize is sounding mighty nice right about now!
********************************************
I've mentioned more than once in recent weeks that I'm starting to add some of my collections to the TCDB, and have continued to do so, albeit at a very slow pace -- like 1 hour every three days slow. I am starting to see how some people could become addicted to the site, which won't be happening to me, but at least I can finally understand some of the site's appeal.
I think I've entered around 600 cards or so, and have even added a couple of images to the site. It's just the fronts of a few cards that I have sitting in scan folders waiting for future posts, but I would have to think that they're better than nothing. I have noticed that a number of the cards from my collection aren't pictured on the site, so I guess maybe someday I'll go back and add a few more images, at least on some of the rarer/more unique items.
And I was even able to use a few of my checklists already, they really came in handy while perusing the COMC sales this past weekend. They're probably also going to be a lifesaver when looking to add cards to this new Alex Smith collection of mine, because I'm not familiar with the majority of the sets that these red cards are coming from, and there is no way that I'd ever be able to remember all of them.
Oh, and I said last week that I probably wasn't going to be any trading, well, an apology is an order, as that turned out to be a lie. I found a familiar name on there who I've already had some past contact with via email, and noticed that they have a few cards that I kind of really want, so after I find a few things from their list, I'm gonna go ahead and send a trade proposal (scary stuff!), hopefully they'll be down for trading with a noob.
**********************************************
I think that's about all I've got for today. I hope everyone else had a nice weekend, and I hope that your weather is treating you better than mine is me
Thanks for taking a moment to look at my page.
Posted by Jon at 9:21 AM