A head's up for collectors

This may come as a bit of a shock, but I collect a lot of different things, and I also like to display some of those things. What I don't like though, is having to pay large sums of money to display these things. You know, cabinets, cases, and other display-y things, can be rather expensive. Sometimes they're worth it, and sometimes they're not.
Generally speaking though, there isn't a whole lot of options out there for displaying stuff on the cheap. Or at least I didn't think there was... and that's where Dollar Tree comes in! 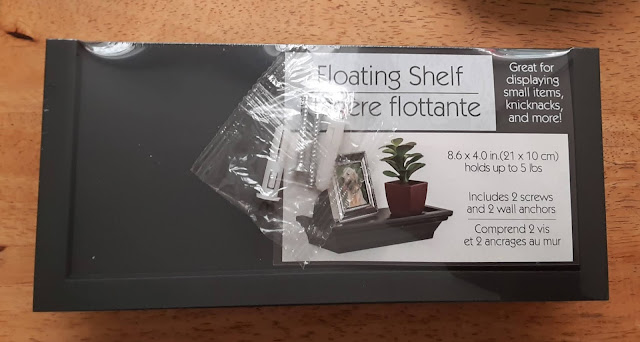 Apparently Dollar Tree has had these floating shelves for about nine months, but I'm just now hearing about them. I wish I could take credit for finding them, but that honor goes to my mom, who came across them at a DT (that's what the cool kids call it) in Nashville last week. The closest Dollar Tree to me is pretty good, but being one of the Podunk stores, is a bit on the smaller side, and only has room for so much -- with floating shelves not making the cut! I've yet to visit any of them, but I've been told that some of the Nashville locations are considerably larger, and do have the space for things like floating shelves. 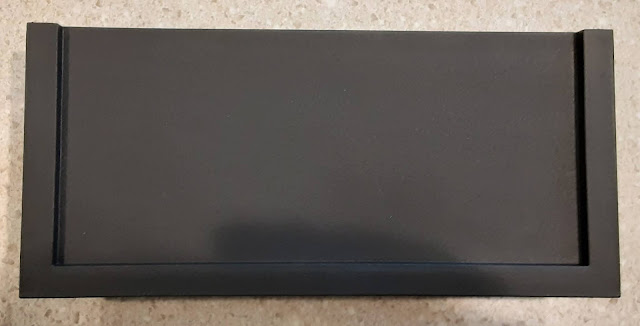 I'm not sure if it comes through in the photo, but the shelves are made out of plastic, and appear to be fairly well made for something that only costs a dollar.

As you can see, there's a bit of detail work, nothing too fancy, but again, they're only a buck.
I haven't put up any of the shelves yet, and I'll get to why I haven't in a minute, but before doing so, I wanted to share a couple of quick display options with you -- albeit with the shelf sitting on the bathroom counter :) 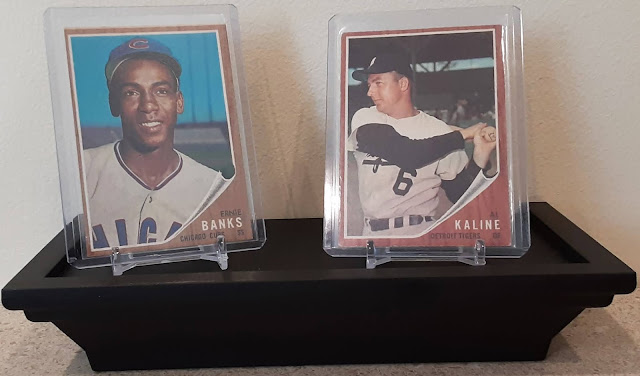 Seeing as how most of the people reading this are probably card collectors, cards seemed like an obvious first choice. Graded, one-touched, and toploadered would all work well. 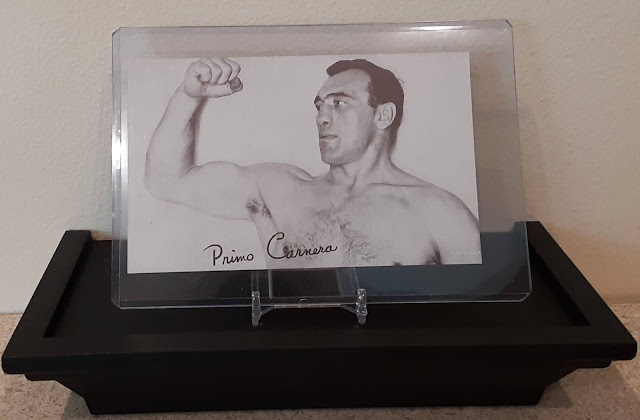 Exhibits and postcards would look really great too. 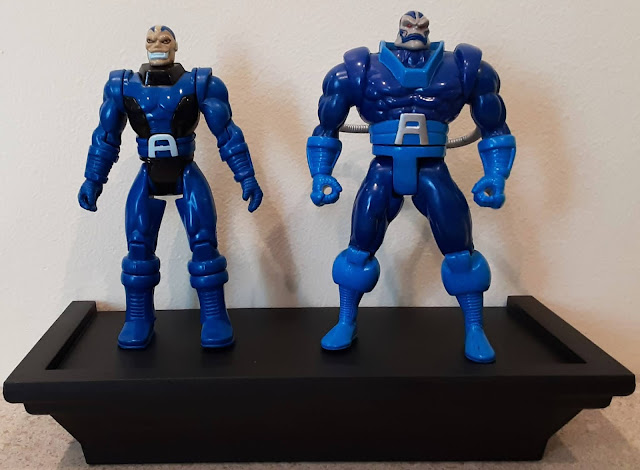 Toys are definitely in option. 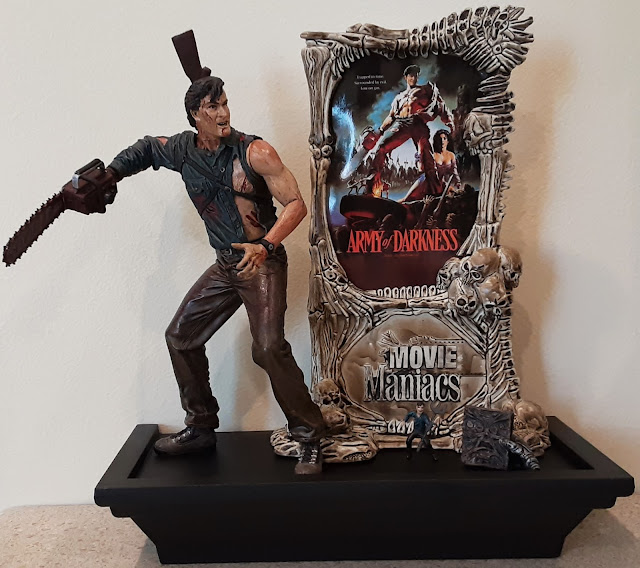 Non-toy toys look great too. As an aside, Ash is definitely going to end up on one of these shelves. 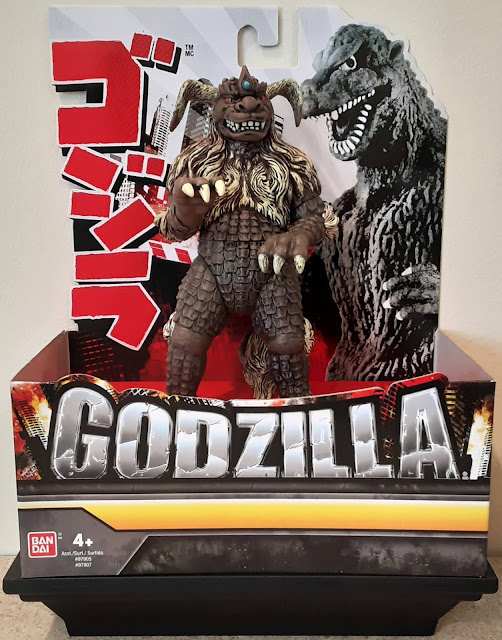 There's enough room for toys in package as well. Though King Caesar here might not have been the best example. 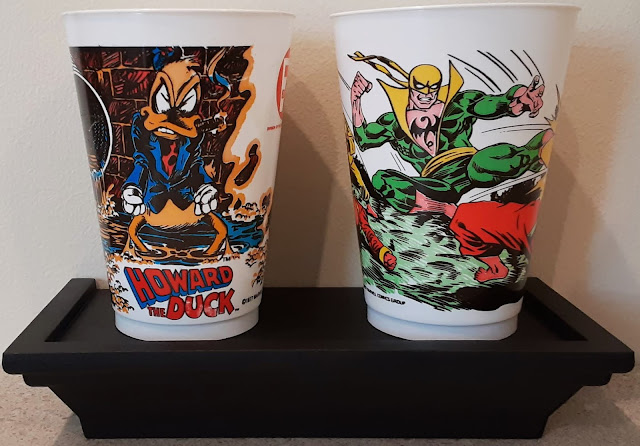 Old 7-Eleven cups? Why not. 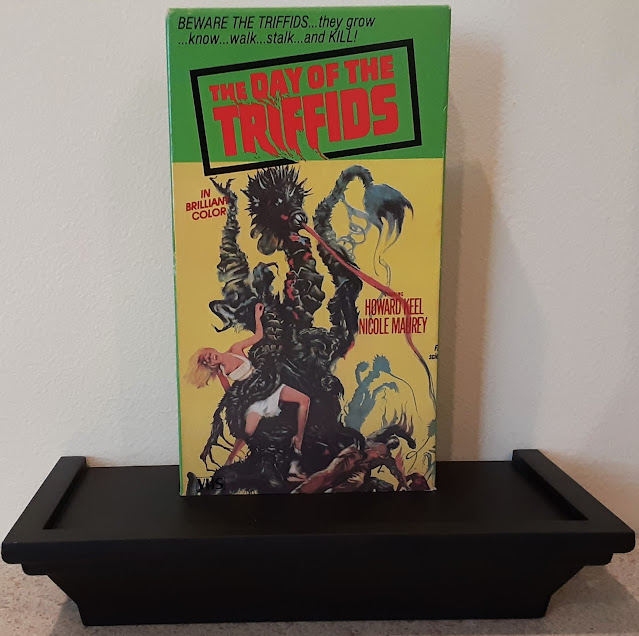 I don't display videos, but that doesn't mean that you can't. The display might look a little better with some related, or very similar, ephemera to fill in the void around the box. 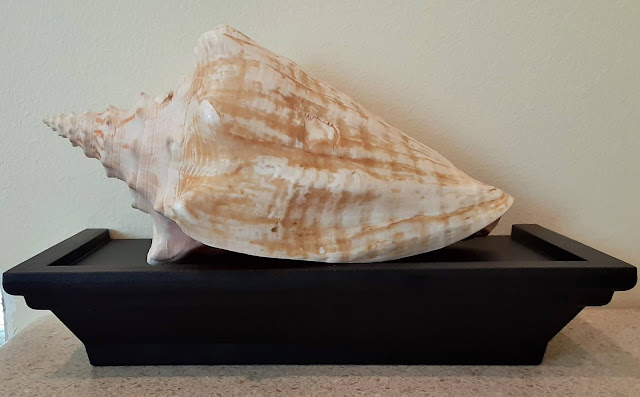 Nature doesn't look too bad either.
As shown on the package, plants and framed pictures are certainly options too. With the 5lb limit, there's no shortage of things that could be displayed. Crafts. A prized hardback. 45's (record or gun). Signed baseballs. Signed football. Heck, I didn't think of it until I got almost to the end of the post here, but a row of cassettes would probably look pretty nifty too. I think you get the point though.
Anyway, I mentioned that I hadn't put any up yet, and the only reason that I haven't done so, is because I'm thinking about customizing some of the shelves. At a dollar apiece, these really lend themselves to personalizing. If you're like me and you like color, they could obviously be painted for variety sake, or to accentuate whatever it is that's gonna be put on the shelf. Découpage is also an option. One could easily cover the shelf in box scores or something similar if a baseball item were going to be displayed. Or you could go the AJ route, but instead of using those old wax wrappers for bookmarks, use them to wrap the shelf.
I'm thinking about possibly going a little more extreme with a couple of them, especially for certain toys. For example, say one wanted to display a Swamp Thing (or Man-Thing) figure. You could easily customize the shelf to fit the character. Various kinds of clays/building materials could easily change the contours. Roots or vines (Spanish moss?) could be added along the outside, with a few hanging down for effect (they could also just be painted along the side). A small tree could be added, and the quarter-inch reservoir could be filled in with colored resin to resemble brackish water. Basically I'm thinking more diorama than shelf. I probably won't have enough time during the summer to play around with these very much, but am hoping to be able to do so once fall rolls around.
And in case you're saying to yourself, "These are fine and dandy and all, but I too live in nowheresville, and my Dollar Tree doesn't carry these". Well, don't fret. I mentioned that my mom found these for me, but she only bought three (she didn't know if I'd like them or not), and I needed more, so... I went on their website and found that you can buy them by the case (12 shelves to a case), and in most instances, have them shipped for free to your nearest store. Which is what I did. I actually bought two cases, just in "case". I don't know if I need 24 shelves, but Dollar Tree famous for selling out of things, and never getting them back in stock. So I'm not about to take any chances. I might even end up ordering one more case just to be safe, after all it's better to have and not need, than it is to need and not have.
Posted by Jon at 5:46 AM