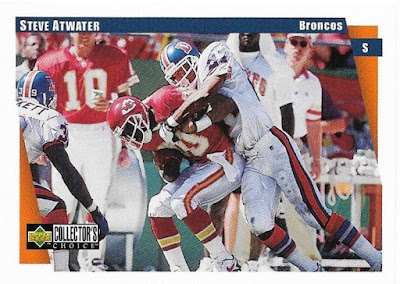 I haven't been feeling very bloggy lately. My dear old friend, depression, has decided to pay me a visit, and as per usual, is making it very difficult for me to want to do anything -- especially if that anything requires me to be on the internet. This has led to no new posts for the last ten day, and I'm probably a week or so behind in my blog reading (I am planning to hit a few of those before this goes live though).
Despite not posting for the last week and a half, I see that the view count on all of my recent posts is way up, which can mean only one thing, the bots have been active during my absence. I guess I should be thankful that I haven't been spammed into oblivion during this time as well. Although, some of those spam comments have been getting kind of funny, so maybe them showing up wouldn't be the worst thing ever. 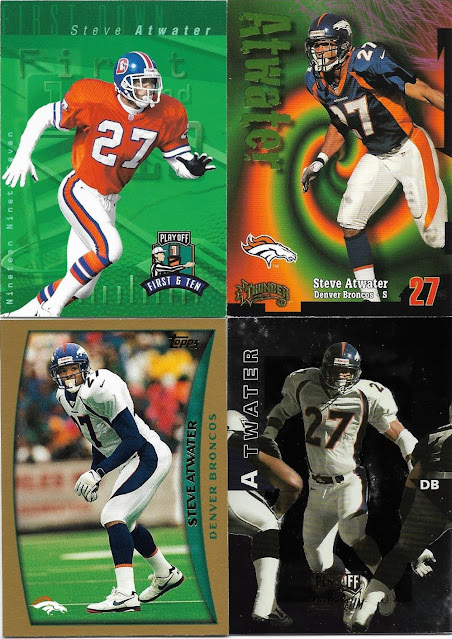 Thanks to a bunch of trades on the TCDB, as well as some of that famous blogger generosity, cards have been coming in fairly steady for at least a month now, mot of which I've yet to scan though. It's just piling up, waiting for me to want to spend a few hours scanning. It might be waiting a while.
I do have a few (two) older trades ready to go though, like this one from a fellow called, OC2410, who just so happens to live in the same state, about two hours down the highway from me. 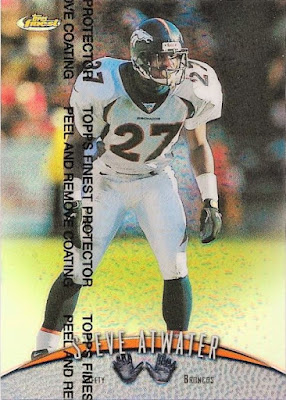 The trade was made up of all things Steve Atwater on my side, the "highlight" of which was this 1998 Finest refractor. I kind of hate this card though, hence the "highlight". I know I talked recently about my general dislike of the Finest brand, so I won't rehash that, but I don't like this design, I loathe the peel, and am not enamored with the refractoriness of it. That being said, it is considered to be a "good" card, and I did need it for the collection, so I wasn't about to pass up an offer from the only person on the site who had one up for trade.
Most of my trades have been of the base card variety, which has been fine, as I do seem to need more than I thought I did before joining the Database. Also, most of my trade bait isn't the sort that's gonna land me many SiCk HiTz, or at least that's what I thought, as I was able to trade a pair of semi-recent serial numbered football cards to, briznuts (I have no idea what that means), for what I consider to be a 90's sIcK hIt... 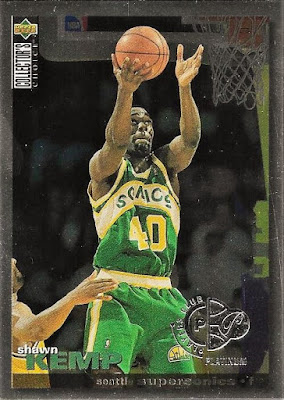 I don't remember what the odds were on the Player's Club Platinum's back in 1995, but I'm pretty sure that they averaged out to about one per box. I never got a box of this year's CC way back when, and wasn't fortunate enough to pull any of the Platinum's from from the few packs that I did get. However, I have been in the right place, at the right time, to find a few in dime boxes over the years. I've also gotten a few ridiculously cheap copies from COMC as well. That being said, none of my cheap finds were on the level of this Reign Man. Many thanks to briznuts (unfortunately I can't remember his real name) for making it happen.
Between all of the stupid-high prices, and lack of reliable places to buy from, my card purchases have continued to dwindle. I never would've thought the day would come when I'd be extolling the virtues of Sportlots, but it has, and I am! For my money, it's the best place to buy cards these days. The site's list of sellers is continually increasing, and most of their prices are still those of the pre-Rona boom.
I made a pair of small purchases recently, starting with a pair of vintage variations: 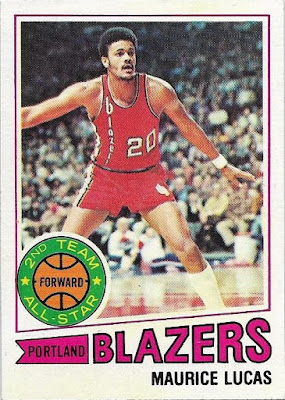 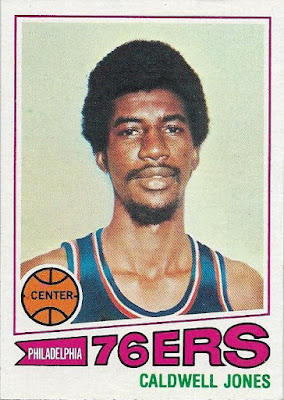 A lot of my basketball focus as of late has been on former Blazers, and while I already had both of these fellows in white-back form, I didn't own their grey backs... 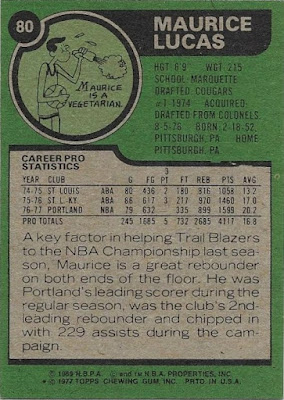 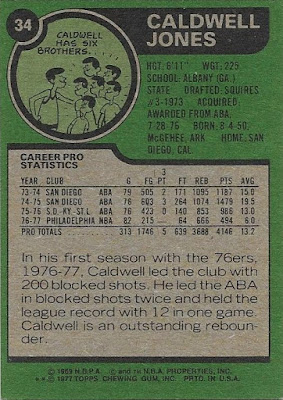 This pair of '77-78's came from a seller called chevyvan, and after shipping was added, were 90¢ apiece. Given their awesome condition, I was more than happy to pay less than a buck for each of these. There was also a Geoff Petrie available, which I would've bought, had it not been all wonked up from some sort of printing issue (smeared ink on the front).
My other purchase, a 1998 Upper Deck Arby's Jerome Kersey, came from a guy called kbartell: 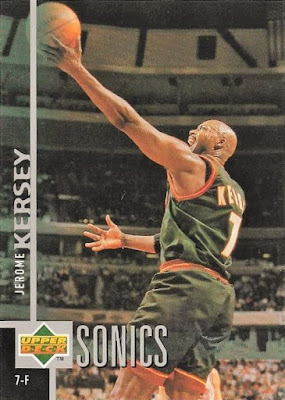 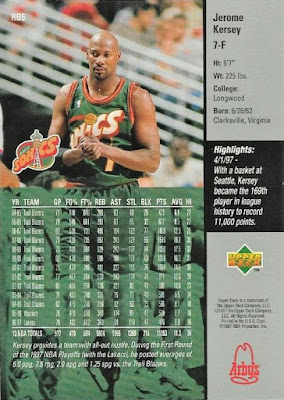 I only just recently learned of this set's existence from the TCDB. Jerome is the only card from it that I had to have, though I wouldn't walk away from the Gary Payton were a cheap copy ever to present itself. The seller had a number of Seattle based regional issues, so it wasn't much of a surprise to see that were located in WA, in a town that I know quite well by the way. Anyway, it's a neat card, and I'm glad I was able to find out about it all these years later.
I think it was about two weeks ago now that I stopped in at the Dollar Tree, and the Serenity Thrift that's right next door. DT was a bust, but for the second time in as many months, Serenity's media section was overflowing with videos. Someone older must've passed, because a good number of the newly acquired videos were of older films, you know, stuff that the youngsters won't even give a chance. It took a good 40 minutes to go through everything (this included pawing through the cassettes and vinyl as well), but it was worth it, as I found half-a-dozen videos that I couldn't leave without. 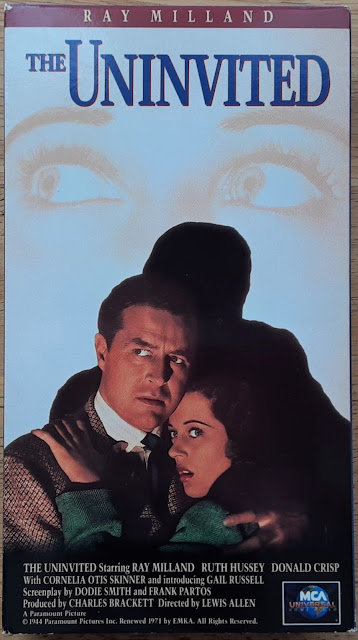 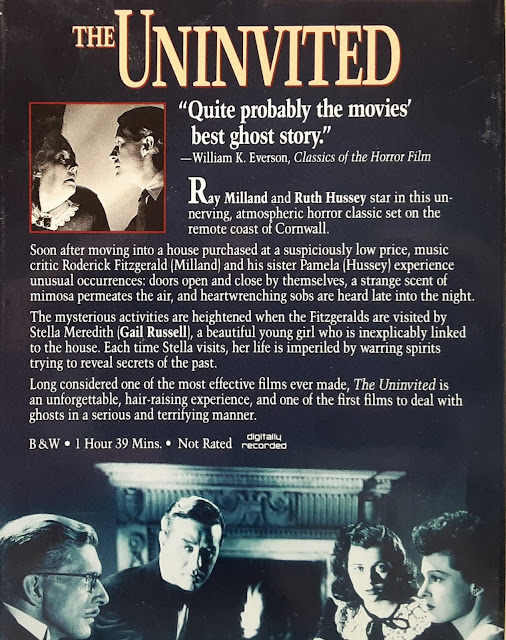 I can't remember specifically which year it was, but some time around '95 or '96, my mom bought this very edition of The Uninvited for us. I want say that it was $19.99, and probably came from Suncoast, as other than specialty catalogs, they were the only ones that carried films like this at time. Being a film that we both liked, it more than paid for itself over the years. Unfortunately, the video disappeared at some point, somewhere in the late 2000's, during a move I believe. Neither of us noticed that it was missing for quite some time, and we don't even know which of us had it at the time of it's disappearance. Between the two of us, there was a lot of moving going on that time, so there was really no way to figure out what had happened after the fact. We also established that are shared copy of Poltergeist II on DVD, vanished as well. But nothing else. Anyways, by then it was available on DVD, but only on a Criterion Collection disc, which if you know DVD's, then you know that the CC DVD's can be quite expensive. Being a cheapskate, I never forked over the cash to get the DVD, and was resolved to wait until I could find another copy of the film, in any format, somewhere in the wild -- which I obviously finally did! It was really nice to see this one again after all of these years, and the film itself is still just as good as it ever was. 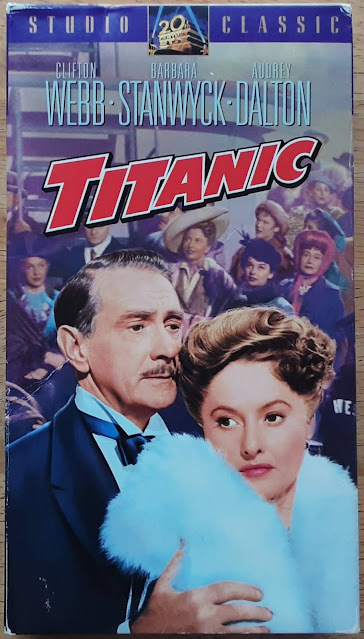 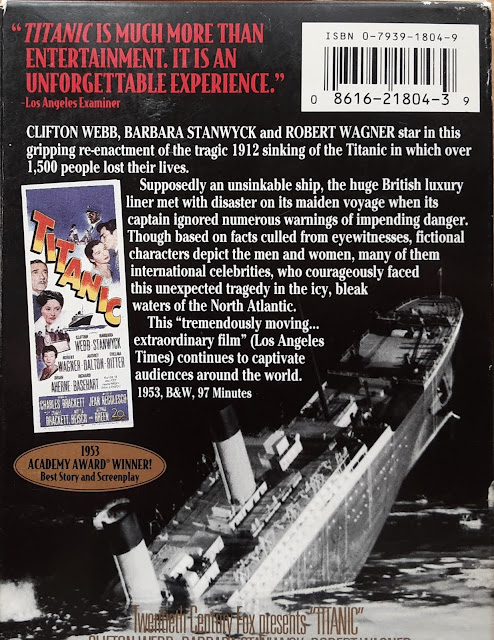 I never cared to see John Cameron's Titanic, I'll leave that version to everyone else, and will take this version instead. 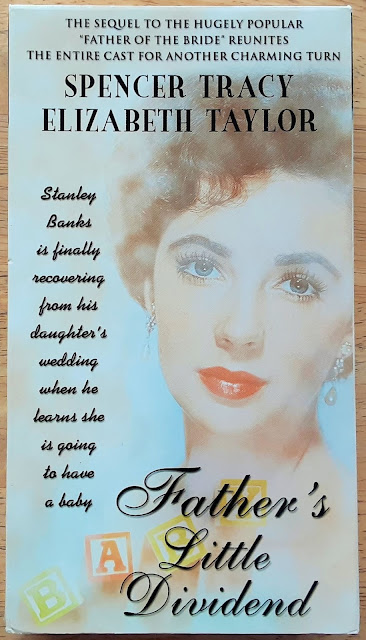 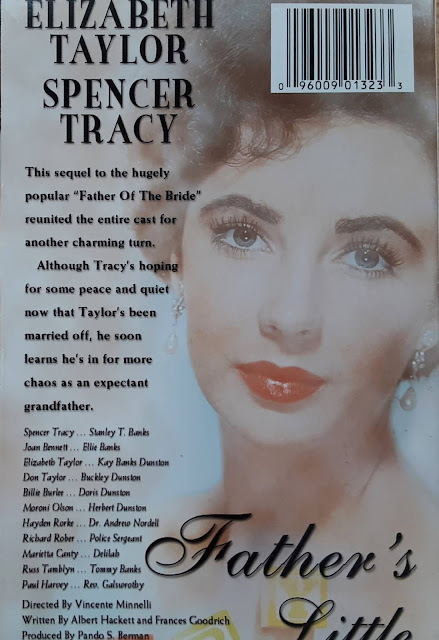 I've owned Father of the Bride on video for a long time, but aside from watching it on TCM, had never come across the sequel before. Once again, everybody else can have the Steve Martin remakes, I'll take the originals. 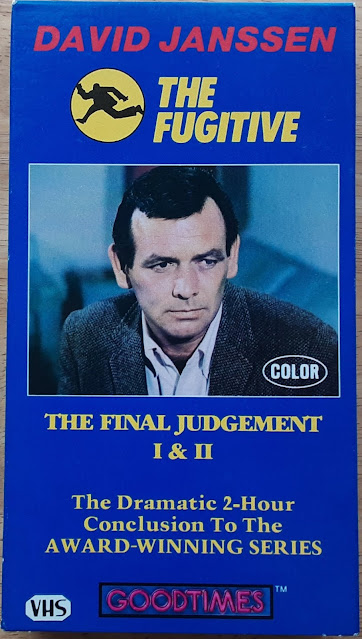 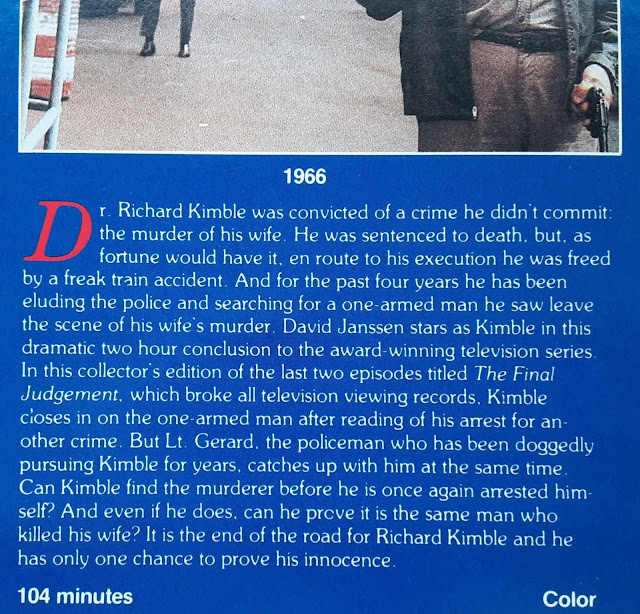 The Fugitive might be only big show from it's era that I've never seen at least one episode of. It wasn't on in syndication when I was kid, and we couldn't just plug every desired thing into an internet at the time (thankfully), so it's just been one that has escaped me up to this point. My mom watched it when she was young, and still likes it, so I grabbed this for her. 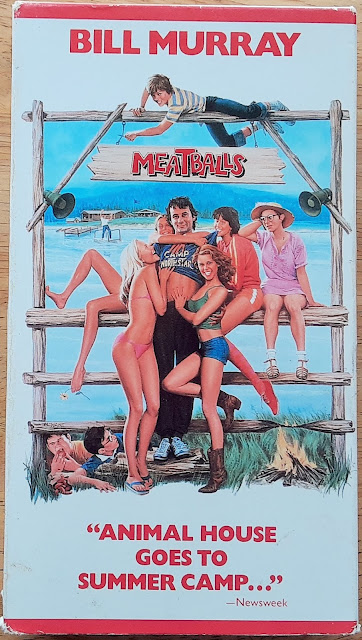 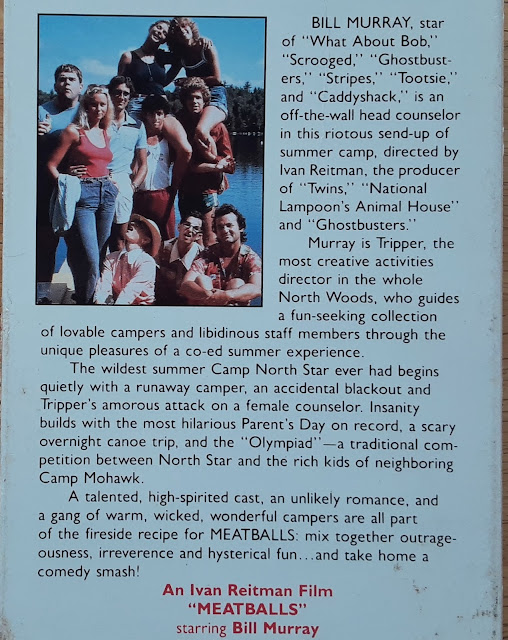 I know that I've seen it, but I can't remember a single thing about Meatballs. I can tell you though that I've seen Meatballs 4 more times than any person should've, thanks in large part to it's constantly being on late night cable back in the mid to late 90's. If you want to do yourself a favor, don't ever watch Meatballs 4, trust me, I know what I'm talking about! 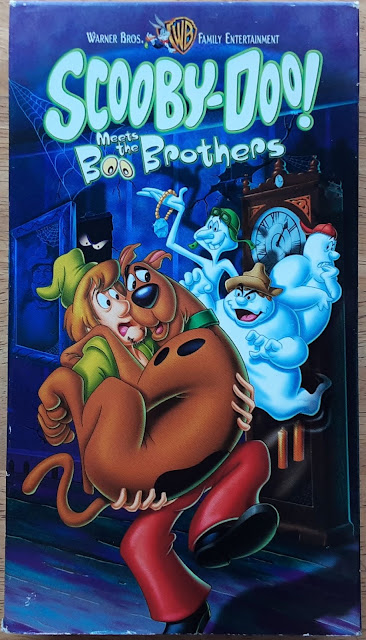 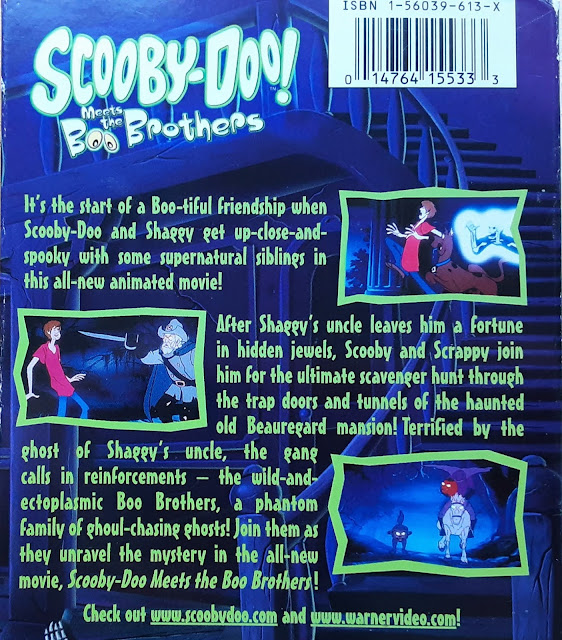 In general, I'm not as big of a fan of Scooby-Doo as I used to be, and don't care one bit for any of the newer stuff. I do however still have some affinity for the films that were produced during my childhood, and seeing as how it's from 1987, The Boo Brothers fits right into my wheelhouse. I watched this the day after I got these videos (The Uninvited was the night of), and it was more enjoyable than I thought it would still be. Sometimes it's nice to not always be disappointed :)
In other news, I put in a shipment request on COMC since my last post. I had intended to wait a little longer to do so, but things seem to be getting even worse for them, and they're are starting to make me nervous. It's funny, things appeared to be getting better a few months ago, packages were starting to get mailed sooner than expected, people were getting their cards processed again, and then just like that, everything went to shit again. Only this time, it's worse than it was before. I'm really glad I don't have anything for sale on the site, as a lot of people, especially the larger sellers, could be shit up a creek if the company goes under. Knowing this, I'm a bit surprised that more sellers aren't running bigger sales in order to reduce some of their inventory, just in case. They say my stuff will be shipped in August, hopefully they can keep their virtual doors open until then. Of course too, in typical fashion, two days after I requested the shipment, a card that I've had in my watchlist for at least two years now, that hadn't ever gone on sale, went on sale, 68%, and I had to buy it. I'm also starting another collecting project that I'll cover in the next few weeks, and got a card for that too the other day.
I also go notified a few days ago that my accumulated order from the Baseball Card Store, that I paid for over a month ago, has finally shipped -- so that's something?
And as mentioned at the beginning of the post, I'm in six kinds of funk right now, so don't be surprised if my posting becomes even more sporadic during the coming weeks. There's a lot of other blogs out there though, so I think you'll live.
Posted by Jon at 5:34 AM