This one takes the cake

I have been using COMC since 2012, and in that time I feel like I've seen most of what the site has had to offer, the good, the bad, and the ugly, if you will.
Despite all of the ugly in the last year, I still use the site on a fairly regular basis. I currently have 185 cards sitting in my account, and have been adding to that number a couple of times a week for over a year now. I search the new listings for a few players on a daily basis, and do some more extensive general searches once or twice a week.
As I'm sure many have experienced, general searches often lead to rabbit holes, where one is likely to encounter items that he or she didn't initially set out to look for. Such was the case the other night, when a series of unplanned clicks led me to what may be one of the more "interesting" listings that I've encountered on the site in the last nine years: 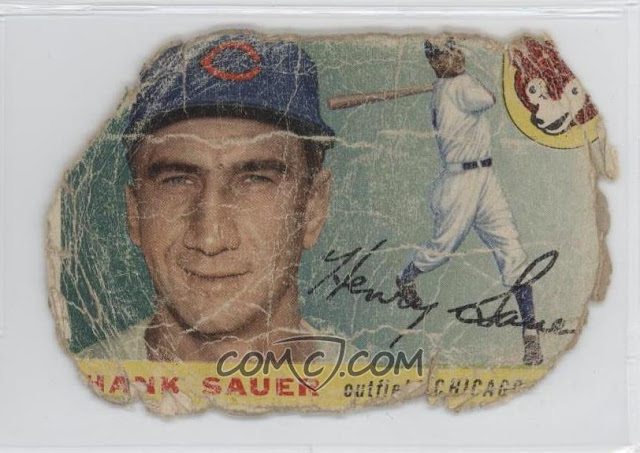 Now I've seen some rough looking cards on the site over the years, most of which have been on the rarer side, this poor Hank Sauer though, well, I'm fairly certain that it now holds the honor of the being the most beat-up piece of cardboard that I've ever seen on COMC. And what's more, it's not rare! This is card #45 in the set, so it's not one of those mythical "high numbers", or an "SP" as the kids are so fond of saying. It's not Hank's rookie. It's not error of any kind. And yet there it is, sitting on the site with a $2.75 price tag. [Two to things to note: 1). Apparently I'm too old to figure out how to do a screenshot, and 2). The price will show higher if you're not signed in] 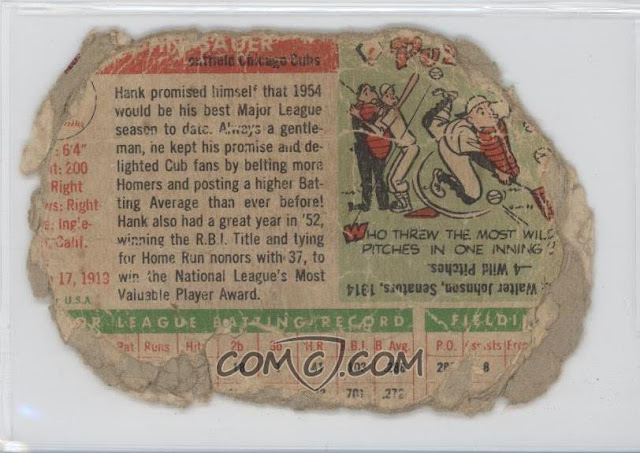 I find it interesting too that this card has probably been on the site for more than a few years now, because COMC hasn't accepted non-rare items in this kind of condition for at least the last 5-6 years. So not only did it's owner pay to ship it to them, but they paid for it to be processed, and because it's priced over the 75¢ threshold, have been paying a penny per month in storage fees for as long as it's been on the site. The storage fees for five years alone, would be over fifty cents, which is about fifty times more than the card is "worth".
I'm sure that some would disagree, but to me, what's left of this card is nothing but recycling. Again, it's not rare, more copies of it exist than there are interested parties in owning one, and that number will only continue to increase with time. I almost never care how people spend the money that they've earned though, so if someone wants to drop almost $3 on this, who am I to say whether it was right or wrong? I would hope that they've done a little research before clicking on that Buy Now button though, as much nicer copies can be had for less, even on the very site that's currently housing this curiosity(?).
Posted by Jon at 5:46 AM