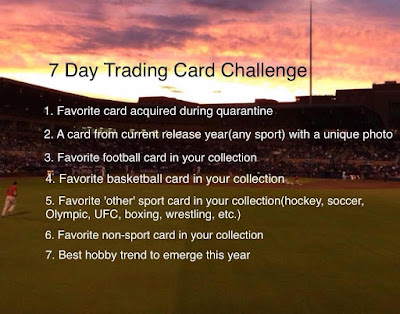 When it comes to life, and collecting, I rarely deal in absolutes, which I consider to be a positive thing, as I've often found that it's good not to have most of one's opinions on any subject set in stone -- after all, things/times change, so why shouldn't opinions/beliefs do the same?

Now that that's been covered, I can honestly say that I don't have an absolute favorite card in my collection, heck, I don't even have a favorite from each sport/non-sport that I collect. With gun to head, I might be able to put together a top 25 from each category, but would never be able to narrow it down to just one. So in order for me to be able to participate in the next four days worth of challenges, I will be bending the rules a little bit, in that I will be featuring A favorite from each of these categories, but not THE favorite, because again, I don't have one!

Okay, so day 3: Favorite football card in your collection?

This ones actually pretty easy, as there were at least a dozen cards that came to mind when reading today's topic, one of which is a sentimental favorite, if only because it's the first vintage football card that I saw, and bought, when I came back to card collecting. 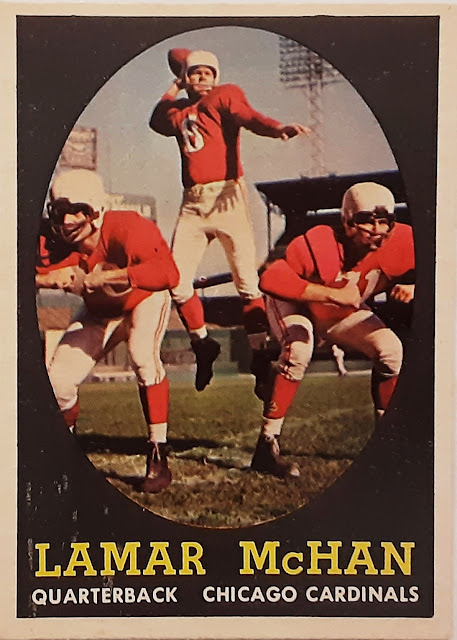 The year was 2010 (hard to believe that was only ten years ago BTW), and I had just returned to card collecting after about a ten-year hiatus. I started going to the Mall 205 shows in Portland almost immediately after coming back to "the hobby", and found that much had changed during those ten years, not only with the cards themselves, but the shows felt quite a bit different as well. When I came back, I was originally only planning on collecting vintage basketball, but after just a couple of months, that plan had been pretty much abandoned, especially once I realized that one of the biggest changes to have taken place while I was away, was that prices on most vintage cards had dropped considerably, and that it was uncommon to find really nice old things in dime and quarter boxes.

Anyways,I was at my 3rd show in as many months when I came across a dealer who had a couple of two-row shoeboxes of vintage from the three major sports, and as I started going through them, he and I got to talking. Pretty much all of the cards in these boxes were fifty cents each (with a few $1 cards in there as well), and after about thirty minutes of looking and talking, I got the hair-brained idea to ask him if a better price could be had if I were to buy all of them? Dude thought it over for a moment, looked to see what he had in there, and then proceeded to let me know that if I bought everything, he'd go down to a quarter apiece, and thus a deal was struck. He also had another one of these boxes under the table that he was willing to do the same on if I took all of them. I stupidly said that I'd take a look at them, so he pulled out the box, and I pulled out a few cards, the first one of which was the above '58 Topps Lamar McHan, a card I had never seen, but was immediately infatuated with. This card alone basically sealed the deal on that box, as I didn't even bother looking through the rest of the stack in my hand, or anything else in the box until I got home. This turned out to be one of my better card show deals, but it also sort of damned me into starting to collect way too may vintage sets, which by the time last year rolled around, had me pretty burned out on card collecting in general, thus me scrapping every single set and finally starting to have some fun collecting again.

As for the card itself, I just love everything about it, the posed jump pass, the blockers, the black border, and heck, I've never been a stadium guy, but on this card even the bits of Comiskey Park in the background appeal to me! 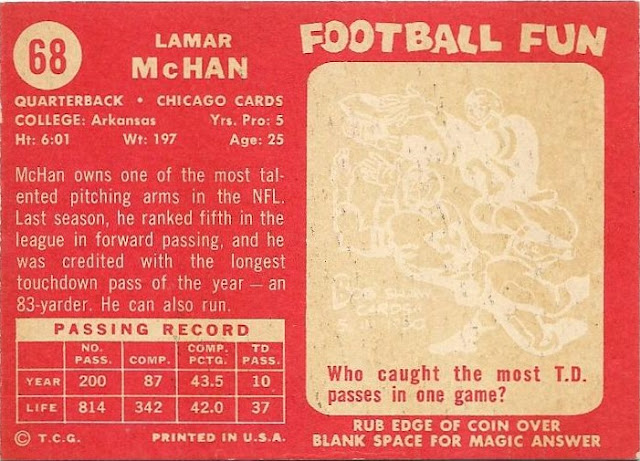 After being drafted by the team in '54, 1958 would be Lamar's last season in Chicago, a season that saw the Cardinals finishing with a record of 2-9-1. Lamar started six games that season, only going 1-4-1. He was traded to the Packers in '59, played okay for the first six games, got injured, and was replaced by then rookie, Bart Starr. And as for the Cardinals, after 40 years in Chicago, and after in absolutely abysmal decade, they would leave for St. Louis in 1960, leaving Chicago with only one professional football team... Da Bears! [Sorry, I couldn't help it]

Even though these posts don't seem to be going over very well (I'm setting personal modern records for lowest amounts of views and comments here), I'm having fun writing them, so you can expect to see me back here tomorrow around the same time for challenge #4.


Thanks for taking a moment to look at my page.
Posted by Jon at 9:24 AM