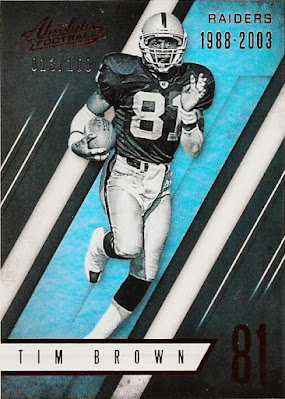 My mailbox has been jumping as of late [note to self: mounting the mailbox to a pogo stick probably wasn't the best of ideas]. Thanks to a couple of small purchases, numerous TCDB trades, and some generous mailers from my fellow bloggers, I have officially been inundated with cards. First world problem, yo!
I said at the beginning of the year that I'd be dropping down to two posts a week, and that has been working well for me, but I'm thinking that I might have to increase my output for the next month or two if I want to catch up on everything. Either that, or I don't show everything, and that's never been my way -- so you can probably expect to start seeing a few more "LOOK AT ALL MY NEW SH*T" posts in the very near future.
Since mail from bloggers is always the best, I'm gonna catch up on a few of those packages here today, starting first with an unexpected PWE from Matt, he of the recently anniversaried, Matt's Wonderful Blog of Hobbies, that I received a couple of weeks back.
I don't talk about my Tim Brown collection very often, mostly because there's not much of a collection to talk about, but I did so a little while ago, and Matt saw the post, and decided to add to some new Brown's to my miniscule collection. The biggest addition is 2016 Panini Absolute Spectrum Red up top. I did have to look it up to see what it was called, but that doesn't take away from it's coolness, I'm just not familiar with a lot of the newer sets. With the thousands of 1/1's that now come out each year, I don't think most collectors are overly impressed by something that's numbered to /100 anymore, but to me they're still kind of awe inspiring, especially too since it's not like I'm receiving them in the mail everyday. 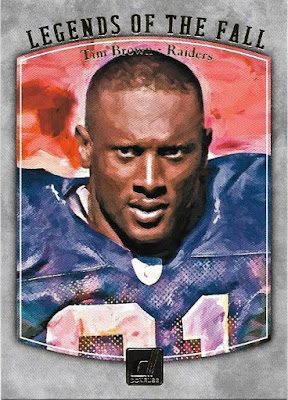 I'm not very computery, but I think this is one of those arted up photos (digitized photos?), as opposed to an actual artists rendering. Was fantasy football around back in 1997? I never heard about it if it was. And if it wasn't, I don't understand the point of the card. I do like the look of it though, I'm just curious as to why it is. 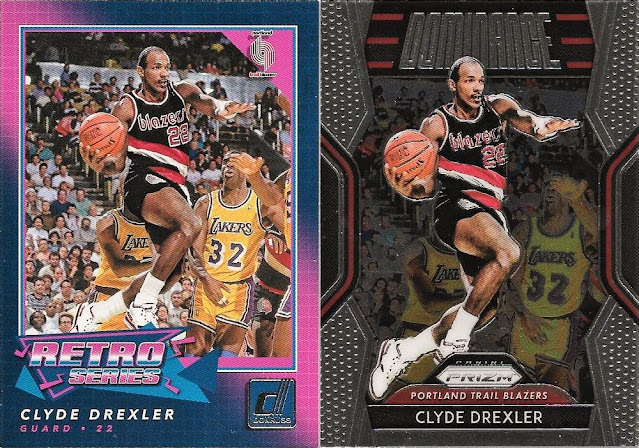 A few non Tim Brown's made it into the envelope as well. I can't quite put my finger on it, but there's something awfully similar about these cards 😉
Thanks for the surprise mailing, Matt. All were new to me, and all were greatly appreciated!
>>>>>>>>>>>>>>>>>>>
Next up is a prize from, Brendan aka Elliptical Man, of The View from the Third Floor fame.

A couple of bloggers ran Super Bowl contests, all of varying degrees of difficulty. Brendan was one of those bloggers, and since his contest was the easiest (I didn't even understand how to enter Kerry's, sorry Kerry), it ended up being the only one that I participated in.

The contest was a simple guess "the total points scored" affair, and even though I don't remember what my guess was, I 'guess' I ended up being closest. I will say for the record too, that I knew the Bucs were gonna win before the playoffs even started, and not because of some grand conspiracy, no, I just knew that Tom Brady wasn't going to let his team lose this past post-season. I didn't have any clue on the score though, that was just pulled out of my backside. 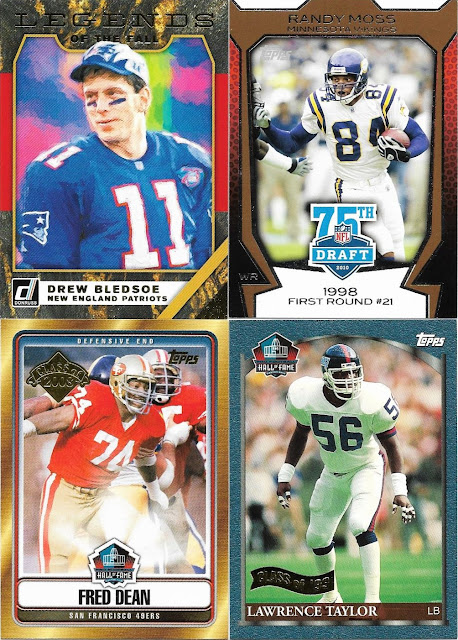 The winner got their choice of prizes, and I chose the "Ghost Cards" lot, or in other words, the retired players lot. Given a choice, I'm always goona go with past greats! 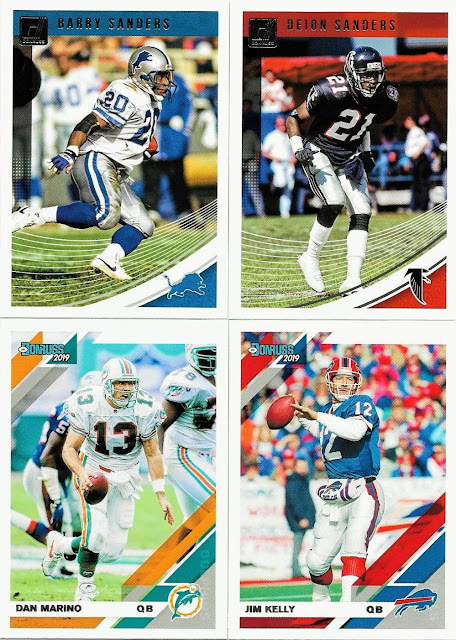 In case you haven't noticed too, there was a lot of neat cards in here, featuring guys that actually accomplished things. I'll take these cards over current rookies any day of the week! 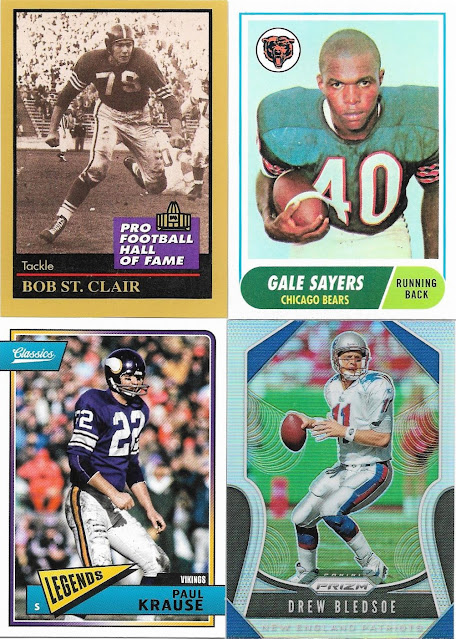 This last group is especially interesting. Bob St. Claire is a guy that I collect, and don't get "new" cards of very often, so I was kind of excited to see this one, even if it did use same photo that graced his 1990 Pro Set card. The Sayers is a rookie reprint (obviously). You can't ever go wrong with retired greats from 2018 Classics. And the Bledsoe is a Prizm Prizm Silver, very shiny in person!
Thank you very much for the contest, and the prize, Brendan! You might be the most difficult blogger for me to try and figure out what I could possibly send you, but I will crack the code at some point.
>>>>>>>>>>>>>>>>>>>>>>
And finally, there's not a lot of Free Stuff posts anymore, but Kerry, of the long-tenured Cards on Cards, is still plodding on with the occasional Friday giveaways, one of which popped up just a couple of Friday's go. 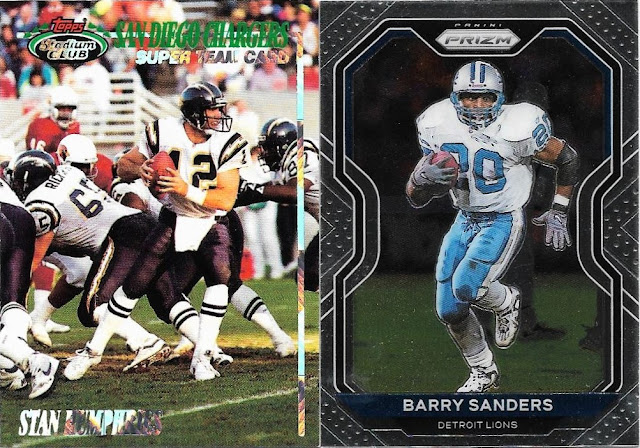 Stan Humphries is quickly moving up my player collection list, at least in terms of how much I enjoy collecting them. Numbers-wise, I still don't have very many of his cards, which is why this one was an easy claim. I hadn't seen one of the SC football Super Teams in person before, and am really impressed by it's overall attractiveness. The foil sections really pop. Barry Sanders was an easy claim too, why? Because it's Barry Sanders, duh!
Despite the many offerings, I only made one other claim, and it was a little bit bigger than your standard trading card... 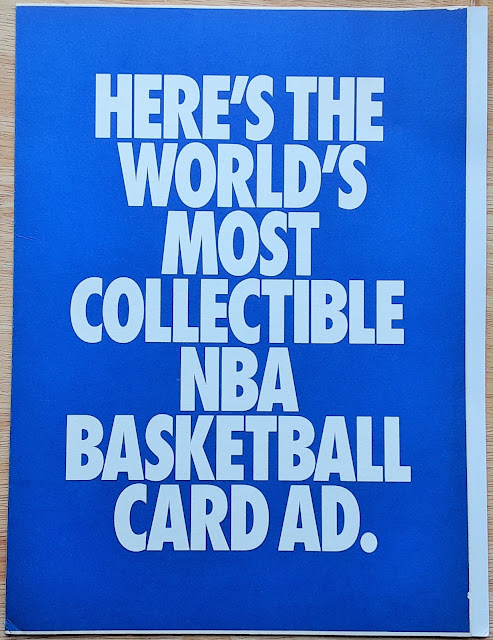 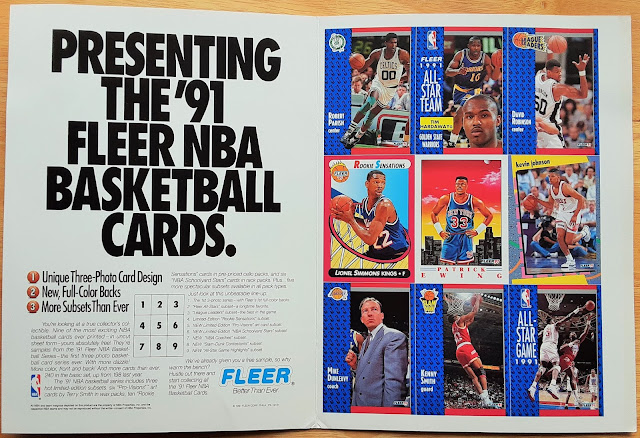 Look at that beauty! Apparently these were in a magazine, but I never saw one before. 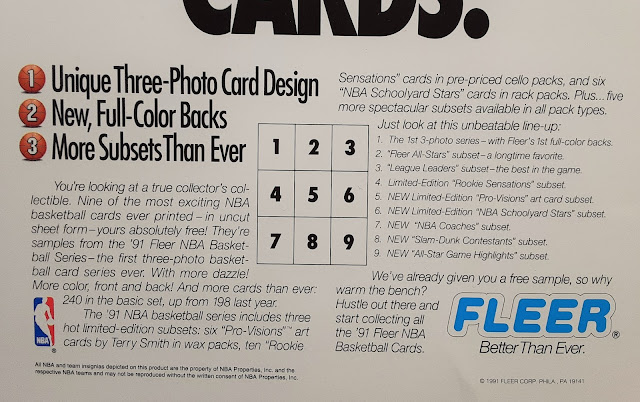 I love this breakdown of the various subsets, all of which were included in the opposite pages sample. 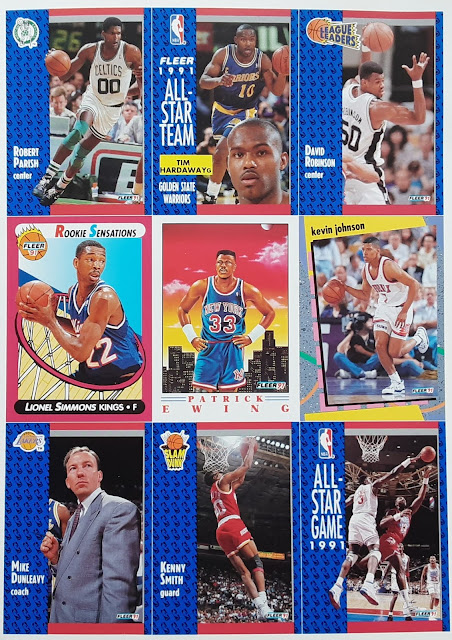 I've seen a lot of people rag on 1991-92 Fleer over the years, but I've always liked it. Was is it the best looking Fleer set ever? No, of course not, but it wasn't the worst either. And it looks a helluva lot better than most of today's sets. That's a hill that I'm willing to die on btw. I appreciate Fleer for trying something different at the time, and like I said, I like the design, nothing else ever looked quite like it. I also dig the fact that there's so many different versions of this set, you've got the normal set, these nifty promotional samples, this was the first year of Fleer and Tony's Pizza brief partnership, so you've got them in that form, and there's the uber-great Wheaties cards (just picked up a few more of those too).
I was quite content with those couple of claimed items, but if you know Kerry, then you know that he's almost always going to try and toss in a few more items, it's what he does! 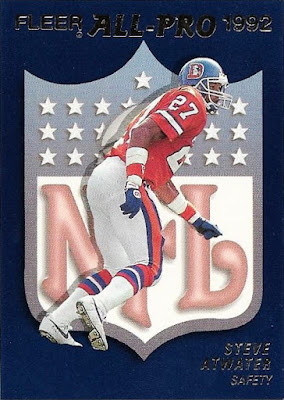 Even with the possibility of extra cards being added, I would've never expected this one. Kerry has now provided both of the cards that I needed from this set (Ronnie Lott being the other), and as much as I dig the design, it's kind of nice to know that I don't have to get anymore of them if I don't want to. 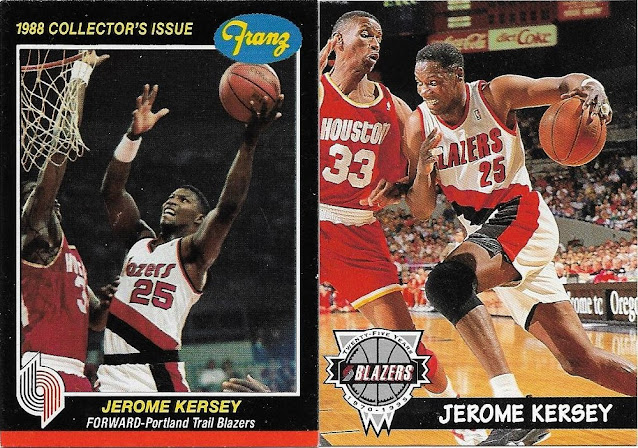