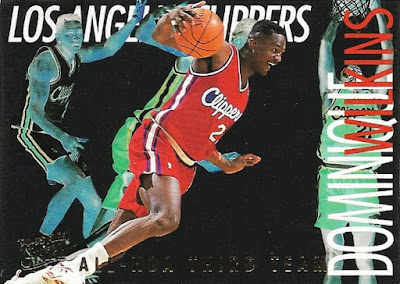 Despite never caring much for formal trading, I seem to be doing an awful lot of it as of late. Well, at least a lot by my standards.
Since the beginning of the year, I've completed nine trades on the TCDB, and currently have two in progress. This averages out to just a little over one trade per week, which probably isn't a lot by some peoples standards, but it's exactly my kind of speed. I can move some unwanted cards out, and have some new blood coming in, all while not feeling overwhelmed, or needing to worry about accidently sending someone the wrong thing. Plus too, one trade a week doesn't take away from my blogging in any way (more probably would), so that's a good thing, I guess.
One of my favorite things about using the TCDB, is when I come across a familiar name. Usually it's a fellow blogger, but sometimes it's also just a person that I've had contact with before through the blog, which was the case a month or so ago when I came upon Bizzork, aka Brian, who had participated in a few of my past Free Stuff giveaways. And in his case I know him too from seeing his user name during the COMC Challenges.
After finding him on the TCDB, I took a quick look to see if we had any compatibility trade-wise, which we did, so I sent of a quick proposal, which was accepted after brief bit of countering. 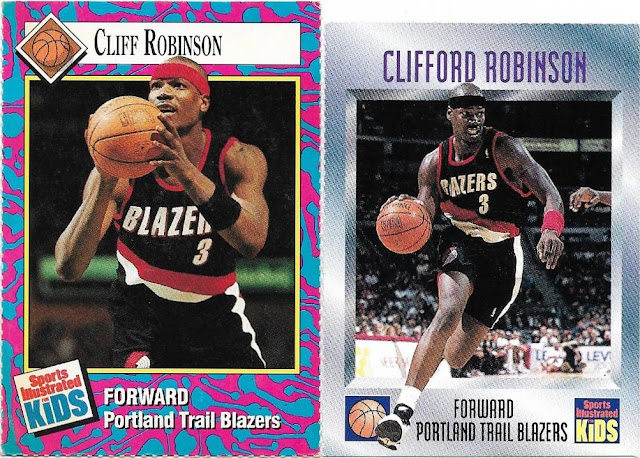 For someone who never cared much about SI for Kids (the magazine or the cards), I seem to be getting a lot of them all of a sudden (there's more coming in another trade). I never realized too that their size hasn't always been consistent, which is quite evident when looking at these 1993 and 1996 examples side-by-side. 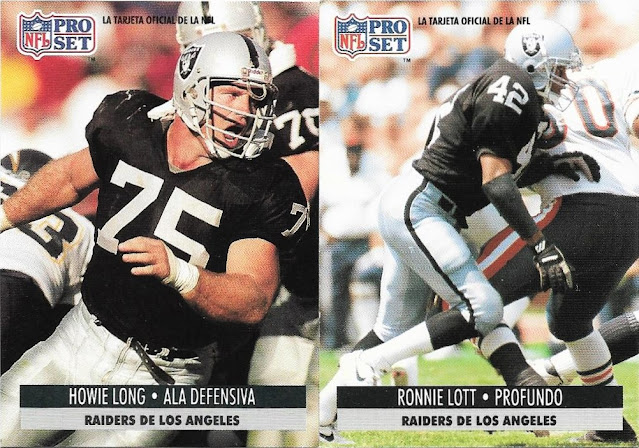 I knew quite a bit of French at one time, and years later started to learn Japanese (that's a long boring story), and thanks to my stamp collecting, can read a little bit of Greek, but I never did pick up any Spanish. Which is kind of odd since my mom was fluent in it (I think that she's lost a little bit of it over the years though), and I would often her here using it to converse with native speakers. We also spent six years living in an area that was heavily populated by Mexicans (and before anyone loses their sh*t, that's how those folks identified themselves at the time). And if that wasn't enough I was friends too with guy from Colombia for about a year during that same time, and he would unintentionally slip into Spanish while speaking on a fairly regular basis -- and yet, with all of that Spanish being spoken around me, aside from a few choice words, I never learned any. Of course I can, and do, still enjoy Pro Set Spanish cards despite not being able to understand the non-English aspects of the set. 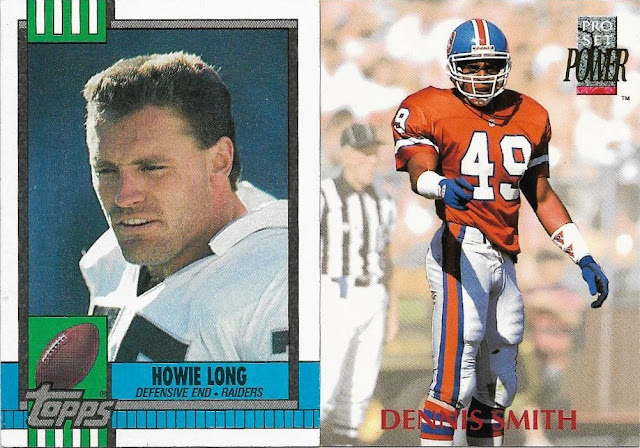 1990 Topps isn't terribly exciting, but this Howie is one of the disclaimer backs, so... yeah, I know, still not that interesting.
There were a few more cards involved with this trade, but the post office just had to do what they so often do these days, and try to destroy the contents of everything that makes it's way through their greasy clutches. This particular envelope took quite a beating and a few of the cards, including the best one (of course), weren't salvageable. I don't blame Brian though, it's just one of those things that now happens much more frequently than it used to. Looking at what survived , I'd still call it a pretty good trade though, and wouldn't hesitate to try and do another one with Bizzork.
>>>>>>>>>>>>>>>>>>>>>>
Despite them being some of my favorite places to go to, I have not found myself visiting very many thrift stores so far this year. There's no real reason why either, I just haven't made much of an effort to go to any. I think I've hit all of two since Christmas. I had occasion to make it three this past week when my mom asked if I could stop and look for something at the Dollar Tree while I was out, the Dollar Tree that just so happens to be next to Serenity Thrift.
Serenity is very hit-or-miss for me, so even though I was gonna be right there, I didn't plan on going in. Then I got there, got in and out of the DT fairly quickly, looked over at Serenity, and figured why not. I'm glad I changed my mind too, as this turned out to be one of those "hit" times, and I was able to get a couple of pretty cool videos/DVD's... 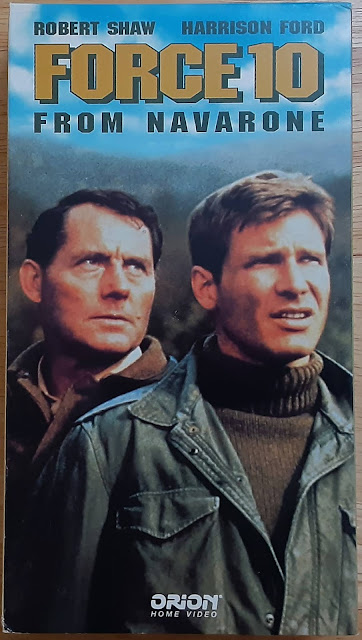 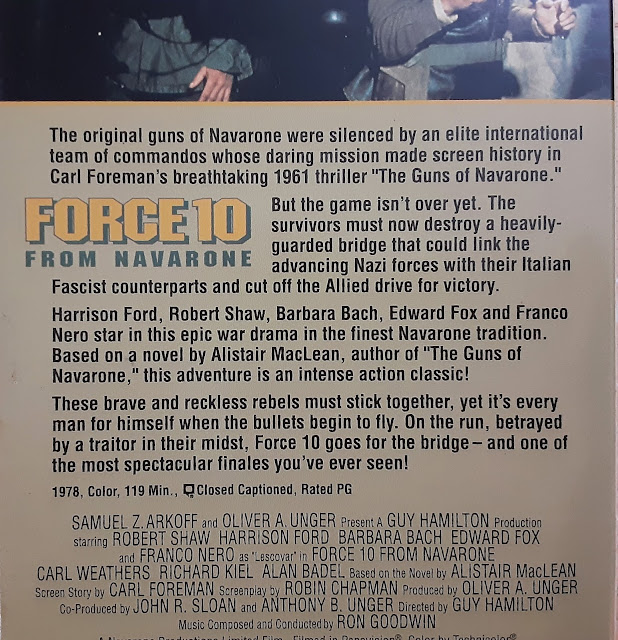 I'm pretty burned out on war pictures, and have been for awhile now, but having never come across a copy of Force 10 in the wild before, I wasn't about to not get it just because I'm tired of the genre. 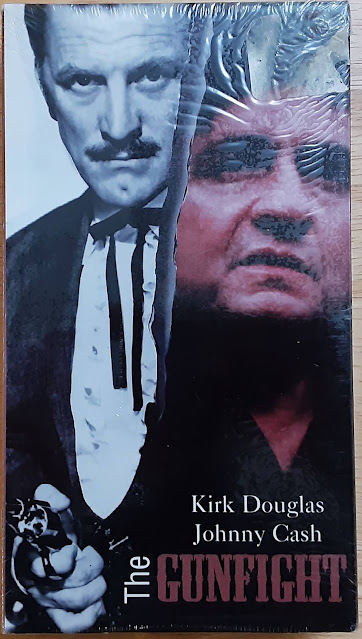 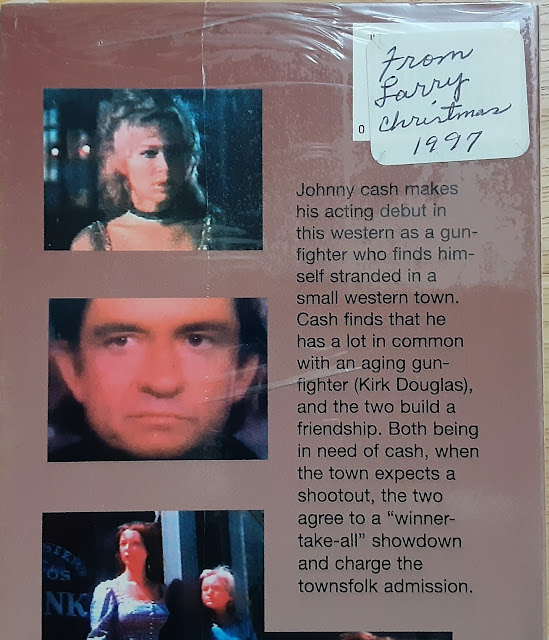 Apparently whoever Larry gave this to for Christmas back in '97 wasn't to enamored with it, as they never even took the tape out of the plastic. It's been 23+ years, but hopefully Larry will take some solace in knowing (if he reads this) that I would've enjoyed being given this tape, and will open it, and will watch it -- especially since I haven't seen it since I was a kid. 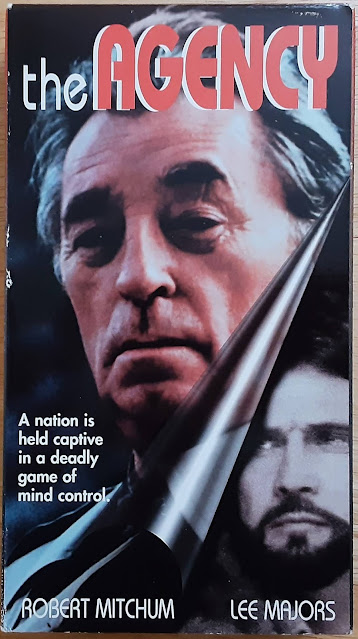 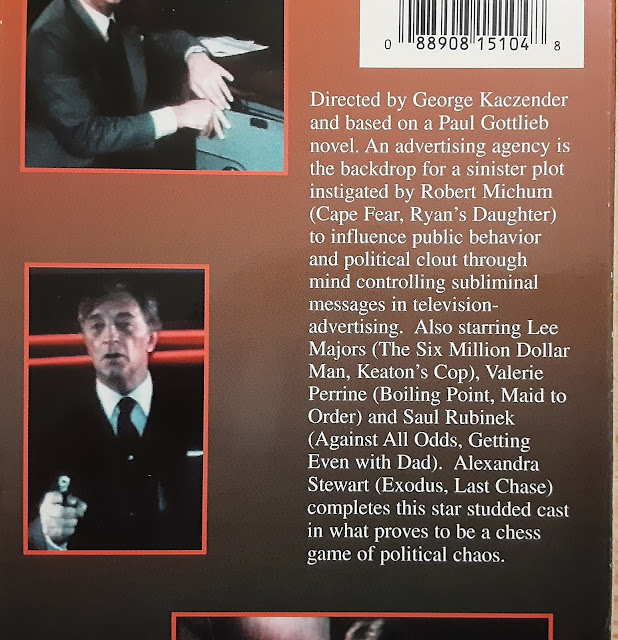 Robert Mitchum! Lee Majors! Saul Rubinek! Where do I sign up!!!! I've read about this film before, and supposedly it's not very good, but it's gonna be pretty difficult for me not to like a movie with those three guys in it. 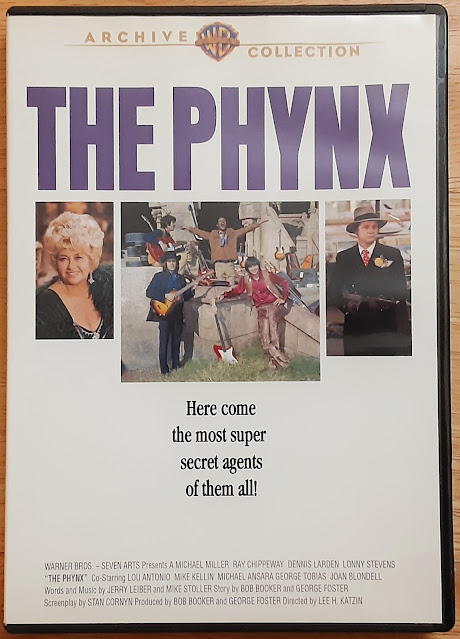 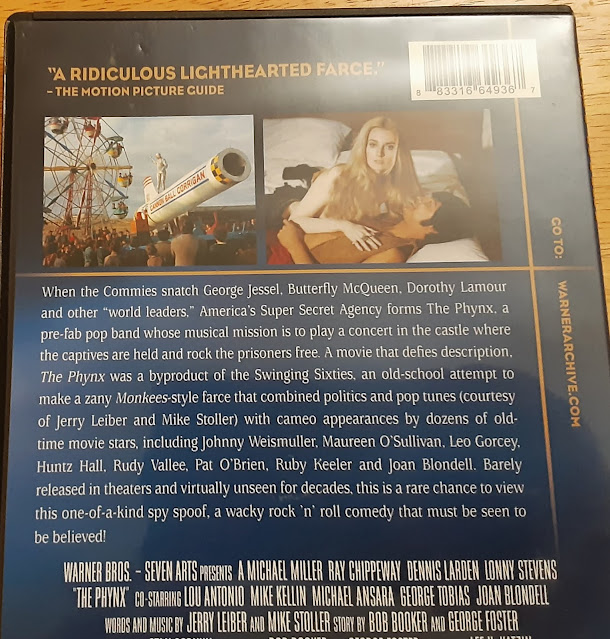 Here's one that I actually know nothing about. I'm thinking that it's either gonna be really good, or really bad, and I'll probably have to be in a particular mood to wanna watch it. Also, I've ordered a few Archives Collection discs from the WB shop during Black Friday sales in the past, but never found one for sale anywhere before (my mom has found a number of them though), so it was kind of neat to finally do so. 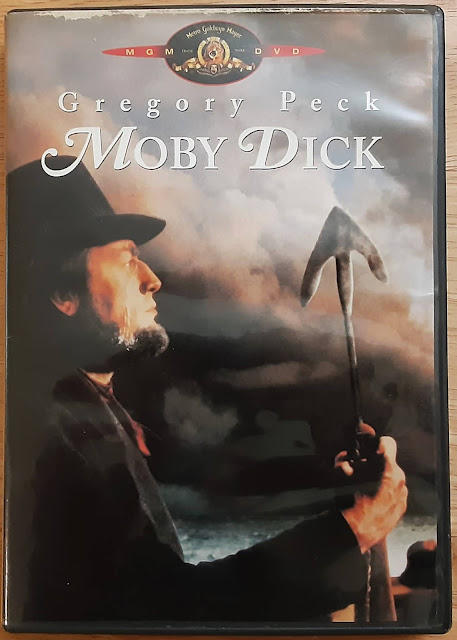 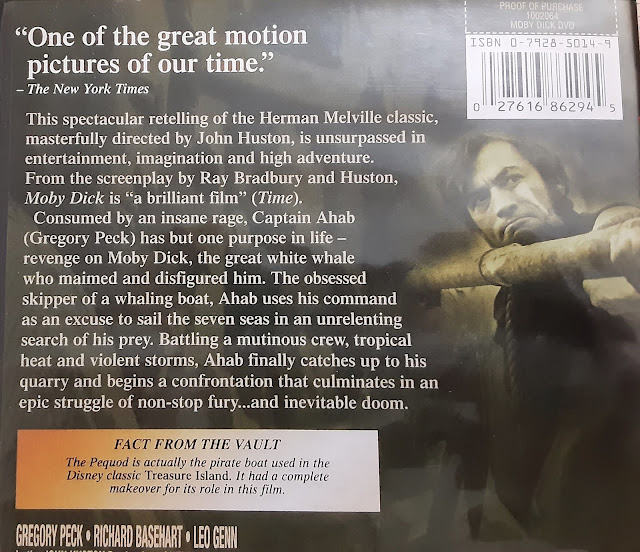 I'm not sure why I didn't already own Moby Dick, as it's a film that I've always enjoyed, granted I only see it once every 7-8 years or so, but still. This is the only one from this group that I watched since getting them, and you know something... it's still good! 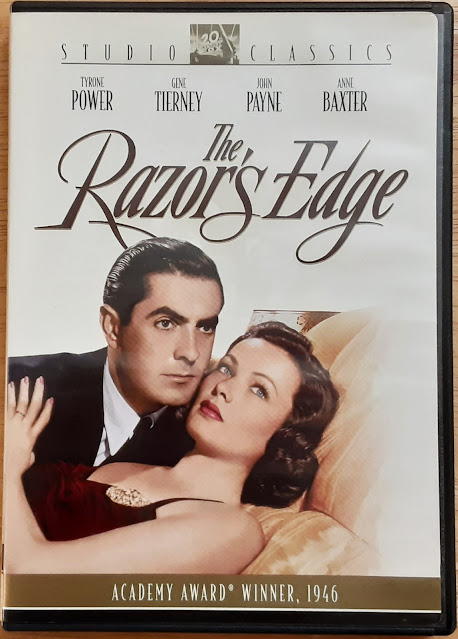 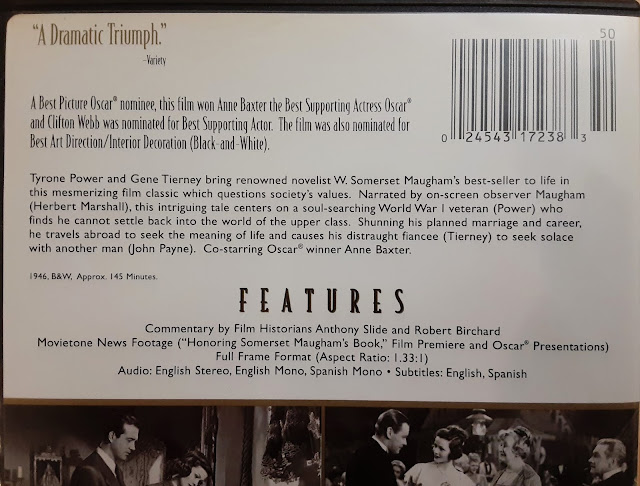 I like a lot of Tyrone Power's work, but this isn't one of his better performances (my opinion of course). The supporting cast is what drives this film. Well, that and the story, as that's pretty good too. I've only seen this film once before, many years ago on AMC (back when they were still commercial-free), and am looking forward to seeing it again.
It's looking like it's gonna be a busy week down here in the land of Sleeves, so I think if I can get the rest of the scans edited tonight, I'm just gonna be lazy and blog about my recent Sportlots purchases this week. Due to length, I'll have to break them into two posts. Neither will win any awards for writing, but they should have a few fun, and slightly different, items contained within, and will hopefully still be worth your clicks :)
Posted by Jon at 5:37 AM