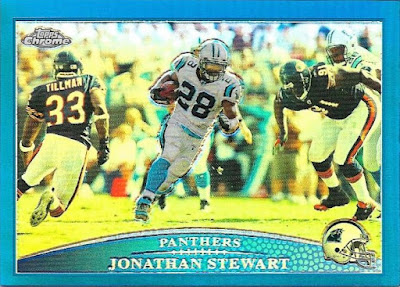 I'm not sure how much interest there'll be in this second Sportlots post, after all, football isn't exactly the most popular sport amongst the bloggers/blog readers. And even those that are down with the "foosball" (a gold star to anyone who knows what movie that's from), might not be overly excited by a post that only features six players.
Why are only six players represented in this three-order splurge of mine? Well, as mentioned in the previous post, I got burned out awfully quick once I started to catalog my player collections, and have been very slow to come back to it. And as a result of that, I think I only have around 10 players cataloged. Since I'm not exactly rolling in dough right now, I'm not looking to get a lot of duplicates, so I'm pretty much just buying cards of guys that are inventoried, which isn't very many! 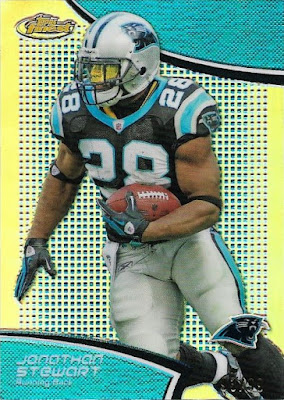 Seeing as how he has a crap-ton of cards, and I know that realistically I can't collect them all, I decided recently just start focusing on J-Stew's blue cards, mostly because they look good with the Panthers (and later, Giants) colors -- which isn't dissimilar to what I'm doing with Alex Smith's red cards. I mean I'll still be collecting any of his cards that I come across in the wild, especially if I ever start going to shows again, but as far as online purchases go, they're pretty much just gonna be blue for the time being.
I led off with a really nifty Topps Chrome blue refractor (2013, I think), which might just be one of the better looking modern cards that I now own (it's at least a thousand times better looking in person, possibly even two thousand). And here we've got a Finest blue refractor, not quite as exciting, but it was cheaper, so I don't expect it to be.

Given the era that he played in, it's not much of surprise to see that Jon's had a number of blue Prizm's, sometimes even multiple different blue's from the same set. This was a pretty good sampling, with at least one of his blue's being represented by the 2013, '14, and '16 sets. 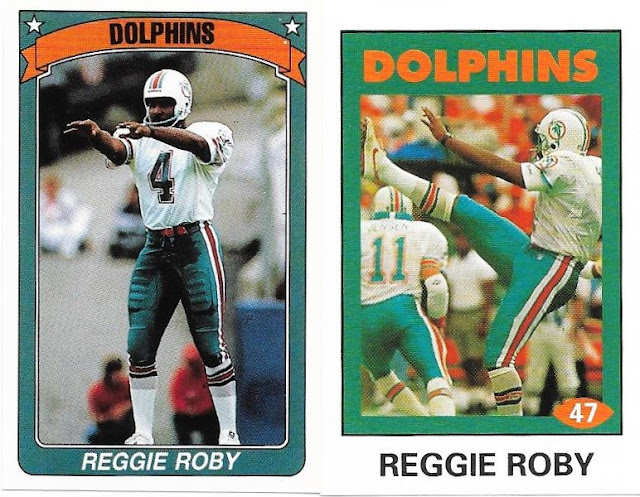 You knew you were gonna be seeing some Reggie's, right? I was finally able to get a couple of his stickers, which haven't been as easy to come by as I had thought. I can't remember for certain off the top of my head, but I think there's still two more for me to look for. 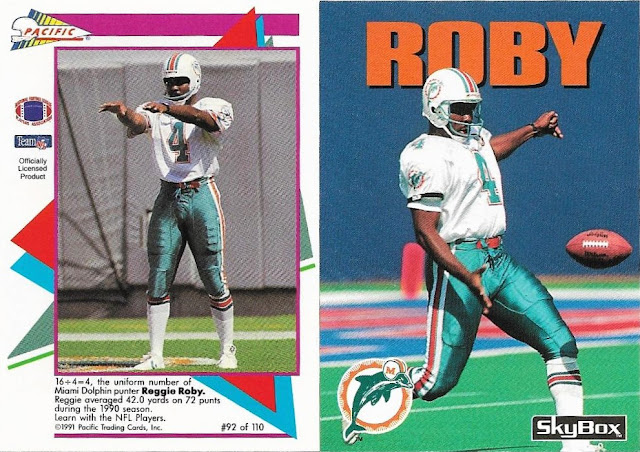 It'd be interesting to know if any kids ever actually used Pacific's flash cards to improve their math skills? The Skybox is a prototype. 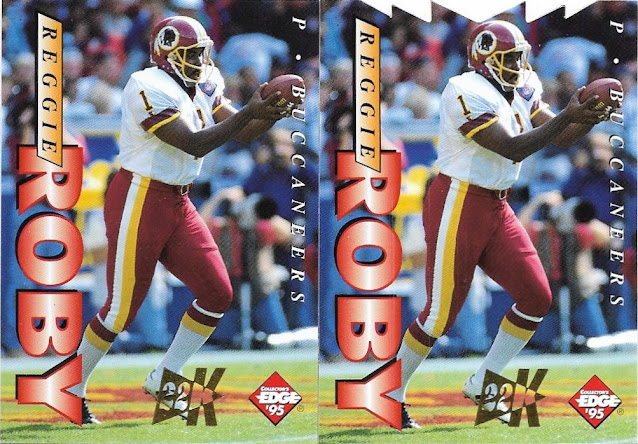 I love Collector's Edge, and I enjoy parallels (for the most part), but one thing that I've never been big on, is parallels of parallels. But, they're a thing, and if you're going for all of somebody's cards, especially someone who played in the 90's onwards, you're probably gonna have to get a few. 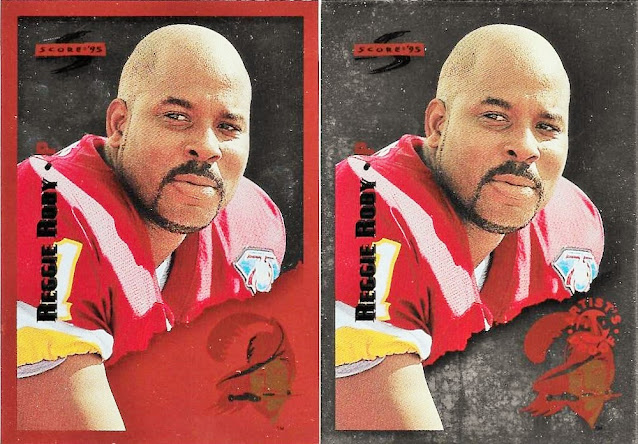 I've known of the 1995 Score's Red Siege parallels pretty much since I came back to collecting, but only recently just learned of the Artist's Proof's. They're quite attractive, but apparently don't scan worth a sh*t! 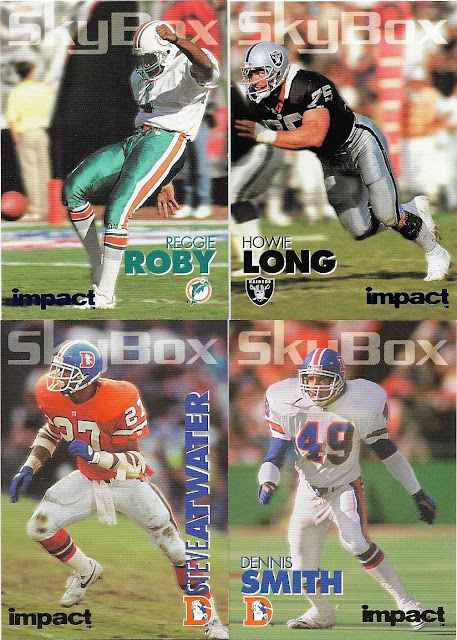 It's hard to tell from the scan, but these are Skybox impact Colors parallels (the 'impact' comes in various colors), which I also just recently learned of. I rarely pay any attention to how I'm laying cards out on the scanner tray, so if something interesting has occurred, I usually won't notice it until I'm editing the scans, or "writing" the post. This was one of those instances, as the layout makes it look like Reggie is a split second away from being laid out by Howie.

The destroyer of worlds pities the fool who doesn't learn math!

I've traded for Steve's Pro Set rookie twice on the TCDB, one was in less than ideal condition, and the other was damaged by the post office, so I decided to put myself out of my misery, and just buy a crispy one for 18¢. Also, I had never seen Score's football version of their Young Superstars cards before, and you know something, I really like them! 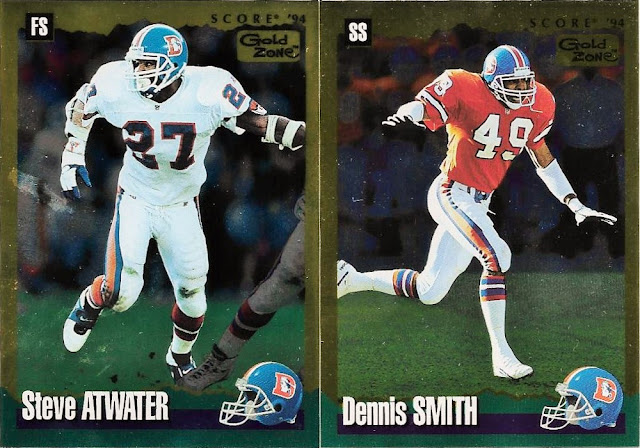 Foil cards always seem to scan funny. There's no blemish/smudge on Steve's card, and yet, there's one on the scan? 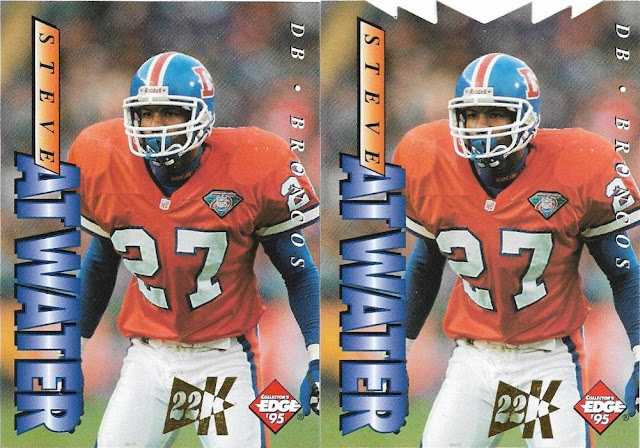 Another completed 22K 'rainbow'. Now I just need the base, Nitro, and Nitro 22K to complete the full rainbow. 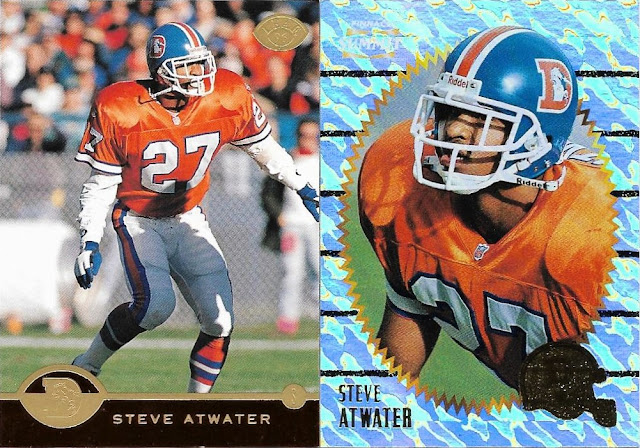 My scanner doesn't usually turn bright reds into brown's, but did here with this Leaf Red. Also, this is the first Summit parallel that I've ever owned, I really love it's crazy shininess.

I didn't realize when I was putting together my orders just how many Atwater's I was getting, but I need a lot of his cards, and one of these sellers had quite a few cheap parallels. It also helped that Steve is one of the ten guys who's cards I've actually inventoried. 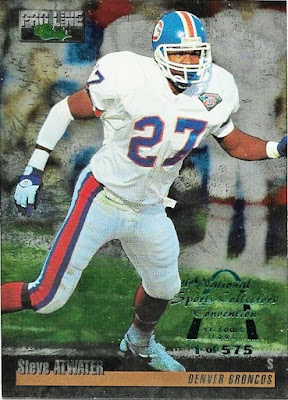 I never saw a single promo, or special stamped card, for The National during my original collecting run, but have seen what seems like a never-ending parade of them since I've come back. It's kind of interesting to see just how many different things they did (most of which occurred during the 90's), but it's also terribly annoying too, especially since a number of them can be quite difficult to find. I'm not sure how difficult these 1995 stamped Silver's are to find, as there are a bunch on COMC, but before deciding to pay a dollar for this one, I did notice that COMC had never had one of Steve's before, so maybe some easier to find than others? Either way, it's a pretty card, and it's nice to be able to check it off the list.
If you're one of the few who made this far, thank you -- doubly so if you scrolled through both Sportlots posts. I don't make these kind of purchases very often anymore, and because of that, I wanted to make sure that everything made it onto the blog, even if the posts themselves weren't all that exciting writing-wise.
Posted by Jon at 5:32 AM