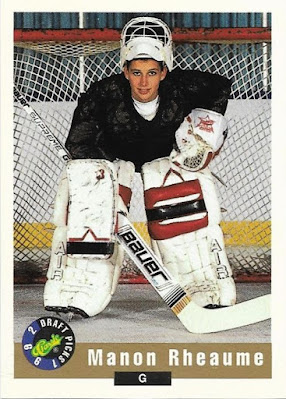 For all intensive purposes, hockey did not exist in my world growing up.
My only pre-teen hockey experiences consisted of going to two Portland Winterhawks games when I was young, and having absolutely no clue as to what was going on. Then there was the Wheaties free hockey stick promotion (which I've already covered before) to celebrate the coming 1992 Winter Olympics. And even though I got two of those sticks, my brief interest in street hockey that ensued only occurred because I and most of my friends were just getting our first pairs of rollerblades around that time, and we wanted to be in them as much as possible, so toss in some free hockey sticks and pucks, and now you've got a bunch of non-hockey kids playing street hockey -- or at least what we thought street hockey was. 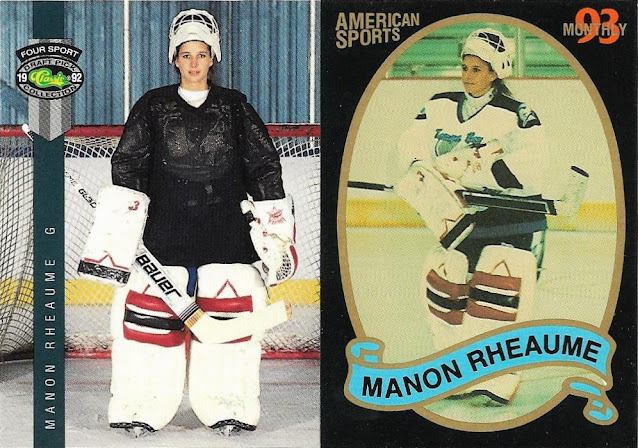 I may not have been a hockey kid growing up, but I was a sports fan, and did know a few hockey names. Well, a "few" may be a bit of a stretch. I knew two names, Wayne Gretzky (everybody knew that name), and Manon Rheaume. I wasn't one to watch Sportscenter, or any other national sport highlights shows, so I'm not exactly sure how I knew of Manon. My best guess though would be that I read about her in an issue of SI for Kids while sitting in a doctors office waiting room.
It doesn't really matter though how I knew of her, the point is that I did know who she was, and I knew what she was doing/trying to do. Not being a player/person collector at the time, I doubt that I had any intention of collecting her cards, and yet I did have a copy of the 1992 Classic Draft Picks that led off this post, and what's more, it was the only card from that set that I ever owned. Like 99% of my original collection though, it went to a charity auction in the early 2000's, when I was certain that I would never go back to card collecting again (this is why you never say never, kids!). 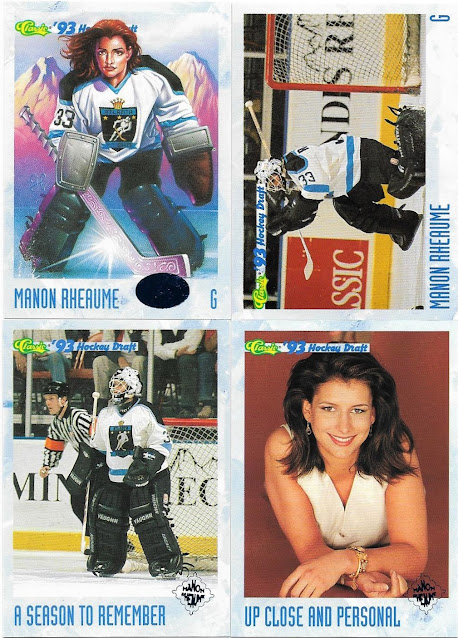 Most of the show is a fog a now, but I can recall that even though I had no intention of ever collecting autographs, I was quite taken with two that I saw upon returning to my first Mall 205 card show  (Portland, OR) in over a decade, back in 2010. The first was a 2009-10 Bill Russell Panini Hall of Famed Signatures (which I did get one of a few years later), and the second was one of the many Manon Classic autographs (I don't recall which one though). Both were expensive (the Bill Russell being considerably more so), and since I wasn't looking to spend that much at the time, or looking to collect autographs (that started at my second show back a month later), I passed on both... but I was tempted though!
Fast forward a few years to whenever it was that I stumbled upon the card blogs, and I started seeing the occasional Manon Rheaume card pop up here and there, which I always kind of secretly admired, and vowed to try and get a few at some point. As per usual though, I would not remember that want until I saw another one of her cards being blogged about, and would then quickly forget about it again.
The opportunity to finally acquire a few of her cards presented itself a few weeks ago when I noticed that my new favorite person to trade with on the TCDB, herkojerko (also known as, John), had a couple on his trade list.
As great as these cards are, I still have no plans to do hockey, but going forward, will be doing Manon. Wait! That didn't come out right (or did it 😎). What I 'meant' to say is that I think I'll add her to my list of player collections, she can be my lone hockey representative.
This particular trade, which was our second (the first can be seen further down), did contain a few more cards, so if you've got a minute... 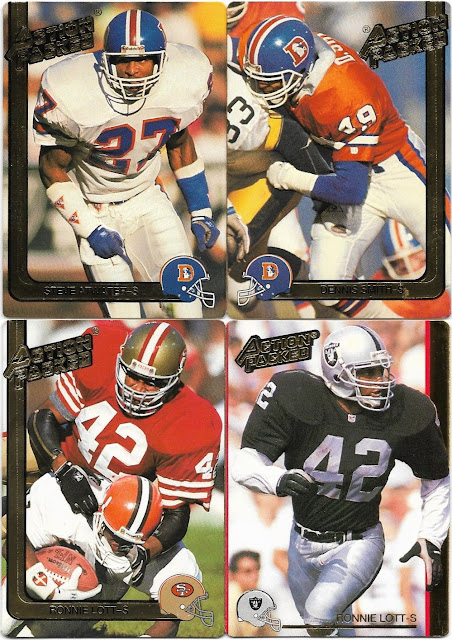 These three guys have shown up in pretty much every trade I've made so far. A lot of folks seem to have extras of Steve Atwater, Dennis Smith, and Ronnie Lott; most of which I seem to need. I don't know why, but receiving Action Packed cards in the year 2021 is just awesome! 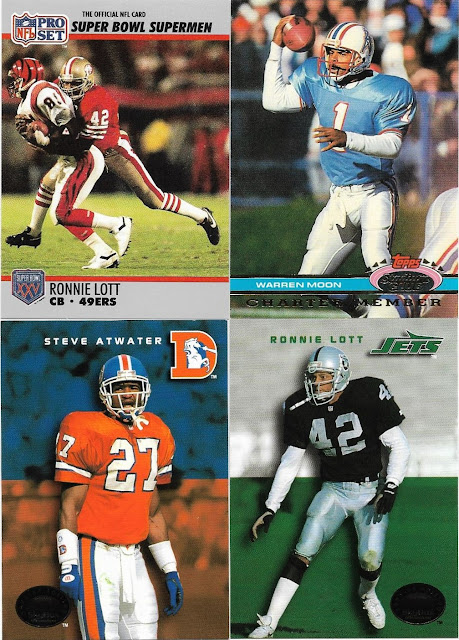 I've spoken about some of the negatives that have come from this boom that we're now in, but one of the positives that I haven't covered yet, is that I've really started to appreciate base cards again. This isn't to say that I was anti-base card before last year, I just didn't go out of my way to seek them out, unless of course they were of the vintage variety. These days though, I'm acquiring more of them than I had in decades, and am enjoying doing so. I feel like this is me zigging while everyone else is zagging. The good news too is that I still need an awful lot of base cards, so if things get even crazier, I'll have something to occupy my time until the prices on the more expensive stuff start to come back down to Mars.

College cards aren't normally of much interest to me, and yet here we are! The Penny and Baby Jordan are from a McDonald's set. I don't even remember there ever being a McDonald's Classic set? 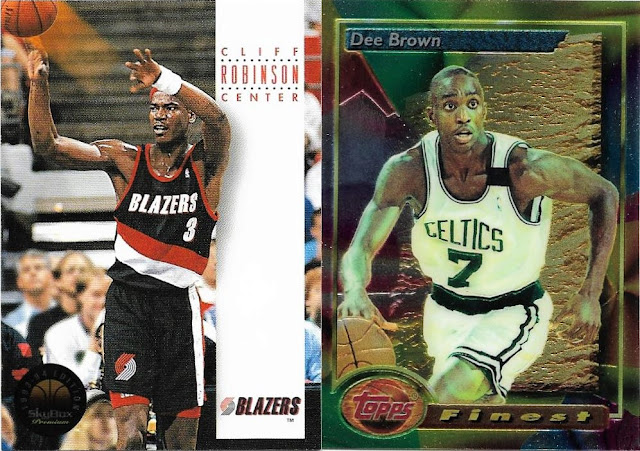 This might ruffle a few feathers, but I've come to realize that I kind of hate Topps Finest, and I think that I always have. The packs were so expensive way back when, too expensive for me. And in my mind they weren't attractive enough to warrant such high prices. I don't think that I've ever opened a Finest pack from any sport. I despised the peels when they started doing them, and still do. I loathe the peel vs. don't peel debates (do whatever the f*ck you want, their your cards!). I hate that I can't take the ugly peels off of old cards for fear that the front of the card will come off with it. And if all that wasn't bad enough, a lot of cards from the early sets are prone to greening. I like the color green, it's probably my favorite color, but blotchy green skin is not a good look. It annoys me too that I need a lot of cards from these 'green' sets, cards that I'm not willing to pay very much, if anything, for. And don't even get me started on the green refractors!
As mentioned, that was actually my second trade with John, I decided to show them out of order if only because it would allow me to lead off the post with something a little different. I liked that trade, of course our first one was pretty good too... 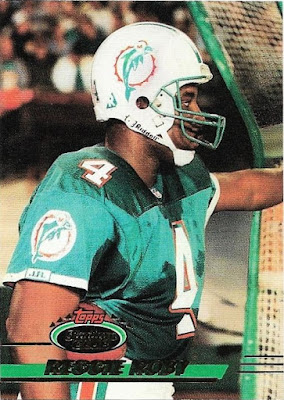 It was about time that Reggie made an appearance! According to the TCDB, my Reggie Roby collection is now 39% complete. I think that it might actually be a tad higher, as they do have a cut signature listed, and I will never buy one of those, so that's one card less that'll be needed to complete his collection, thus raising my percentage a tad.

This is a fun scan, it's like a mini retrospective of Steve Atwater's Stadium Club cards. 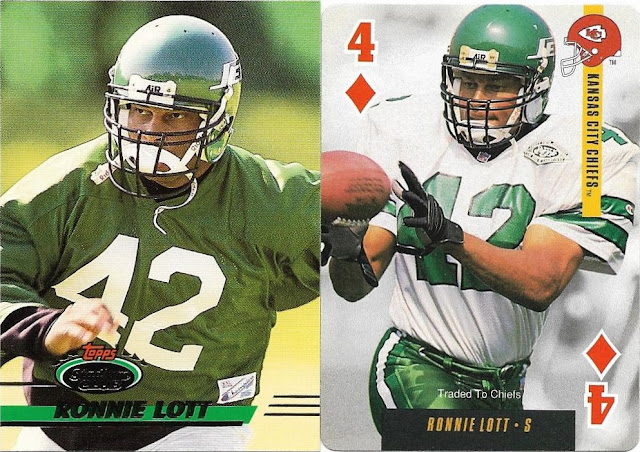 I didn't realize how many playing card sets had been made until I started actively using the TCDB. This particular Ditka's Picks is a sunset card, so that's kind of neat. 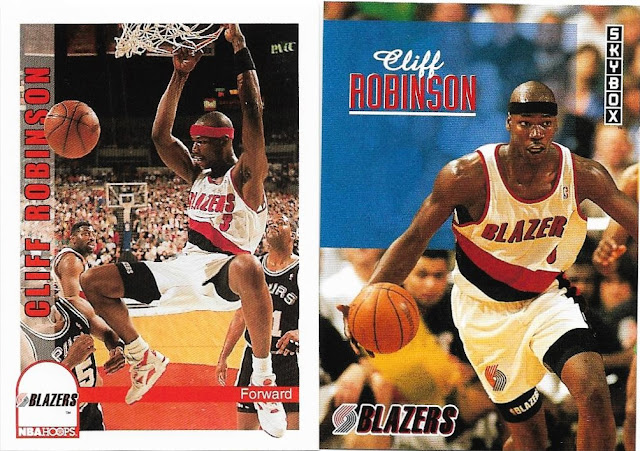 And here's when I started to have some issues with static during this scan session. Anybody else ever have that problem? If so, do you have any tips on getting rid of it? If it is going to happen, it usually starts doing so when I'm almost done, but is still terribly annoying to deal with for those last couple of scans. 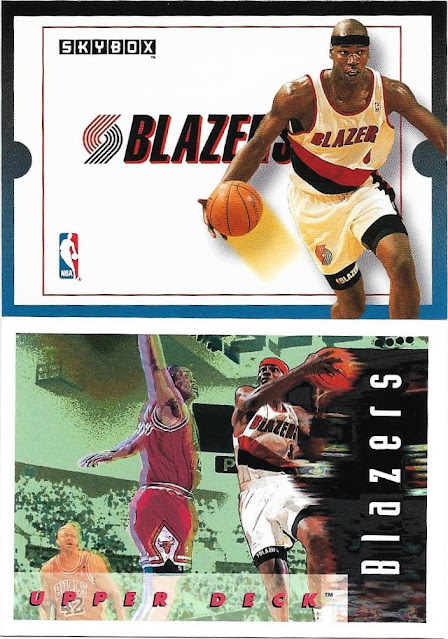 Besides packaging his cards really well, the thing that stands out to me the most about John's cards, is just the overall great condition of his stuff, especially the base cards. He obviously takes pride in not sending out crap, and I really appreciate that.
So in conclusion, I don't know what a "herko" is, but can say that John is certainly no "jerko". And if you ever get the chance to trade with him, I'd highly recommend it.
Posted by Jon at 5:37 AM