Everybody loves top ten lists, right? Wrong. I don't care for them all that much. I care even less for scanning lots of cards though, so when my accumulated order of around 125 cards arrived from the Baseball Card Store a few months ago - while I was away from the blog - I knew I wasn't going to want to scan them all, so I plucked out ten of my favorites, scanned them, and sat on the scans until I returned to the blogging fold. I've been back for a weeks now, and figure that this is as good of a time as any to make a list out of the cards and post it.
#10: 1992 OPC #645 Deion Sanders 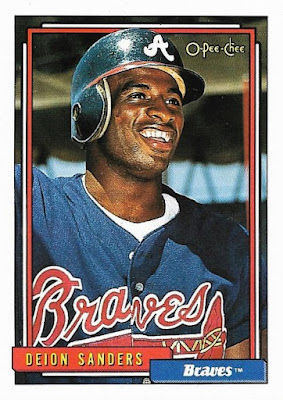 1992 Topps is the last baseball set that I remember completing during my original collecting run. Almost thirty years have passed since then, and my memory, especially when it comes to cards, isn't nearly as sharp as it once was -- as such, I often see things on the blogs, or somewhere else online, that I know for a fact I once owned, but upon seeing now, have absolutely no recollection of ever laying eyes on it before. 1992 Topps is one of those sets that this happens with on a fairly regular basis, and did so again when I espied this Deion Sanders. It's not the most interesting of cards, that's for sure, but I don't remember it in the least... so here it is! Also, it's an OPC, so that makes it a tad different, and dare I say, better?
#9: 1994-95 Fleer All-Star Weekend #23 Clifford Robinson 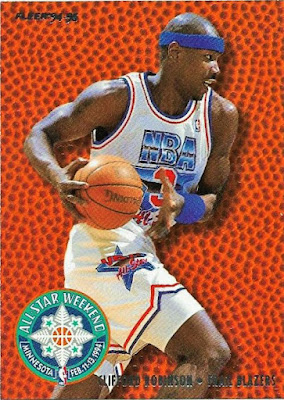 This card isn't all that interesting either, but after trying to trade for twice on the TCDB, and having one show up damaged by the post office, and the other being sent by someone who was completely comfortable sending people shitty cards (that weren't described as such), I was just really glad to finally get a nice one, and be done with it.
#8: 1995 Collector's Choice Update Stick-Ums #86 Steve Atwater (and others) 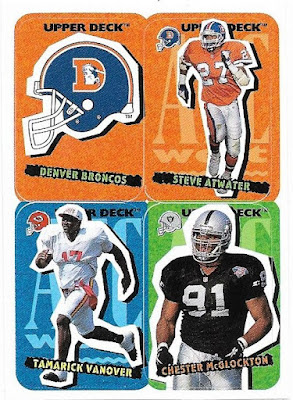 Unfortunately for me, I had stopped collecting football by the time Collector's Choice had come on to the scene, and therefor missed out on quite a bit -- including these nifty quad-stickers. I haven't looked through the checklist, so I don't know if I'll ever have cause to buy anymore, but was happy to be able at least one to the collection (the Steve Atwater collection to be more specific).
#7: 1992 Donruss #470 Bo Jackson 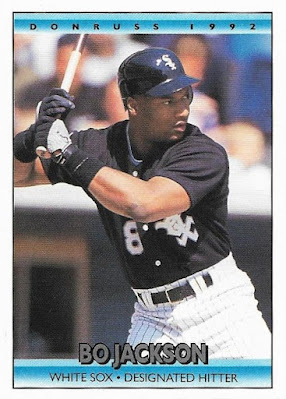 If someone had told me by the late 90's, that a time would ever come where I'd look favorably upon on Donruss' 1992 offering, I'd have said they were batty. But here we are in 2021, and here I am saying that I actually dig the '92 design. I wasn't overly fond of it as a kid, and really disliked it by the time I stopped collecting, so I'm not sure what brought about the change? Well, that's not true, I think a big part of it is just that after the last twenty years of mostly terrible, and certainly overly busy, card designs, I now have a much deeper appreciation for the simpler, and less busy, designs of old. There may be a tad of nostalgia mixed in as well, but I'm not ready to commit to that yet.
Funny thing about this Bo too, I actually received two copies in the order, which I'm sure I did accidently, as these cards were purchase over about a six-month period, and I never keep track of what I've already bought from the site. I don't mind owning two copies of this particular card, and they were only ten cents apiece, so it definitely isn't a "loss" by any stretch of the imagination -- but when I went to enter the card onto my TCDB list for Bo, I noticed that it was one of those ones that had the annoying period/no period variations, and as luck would have it, I had gotten both in my order

This example would've been much easier to see had I layered the cards on top of each other, but I didn't, so in case you can't tell, the card on the left doesn't have a period after INC, and the card on the right does. These variations are terribly lame, but like a lot of people, I feel like I have to get both for player collections. At least in this instance though, I didn't have seek them out, they both just came to me of their own volition.
#6: 1994 Topps Ren & Stimpy All Prism #46 Come on and get your Log! 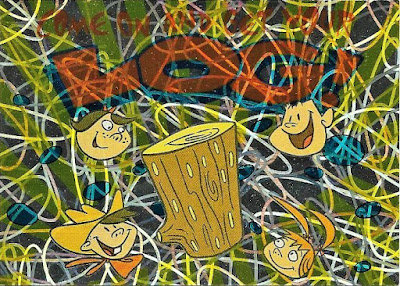 I was big Nickelodeon kid. Aside from the little kid stuff in the mornings, I loved pretty much every show on the channel. Cartoon or live-action, new or old (Nick at Nite), it didn't matter, I loved them all. Except for The Ren & Stimpy show, I never did understand what the appeal of that one was. However, I was an anomaly, and all of my friends liked it, so even not being a fan, just from the time spent at other people's houses, I probably saw every episode at least once. And while I may not have been a fan of the show as a whole, I did enjoy bits and pieces from time to time. One of those bits being the commercial for Log (*from Blammo!). Looking back, it's still my favorite thing to come from that show, and so when I saw this card (from a set that I don't recall ever seeing), I knew that I had to have it. As per usual with cards like this, it looks much better in person.
#5: 1994 Classic Pro Hockey Prospects #239 Manon Rheaume 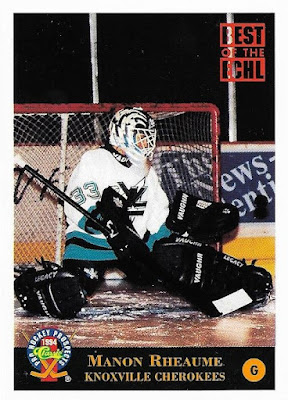 A hockey card? From a Canadian site? I know, it's crazy, right? I've only got like a dozen cards in my Manon Rheaume collection, so I wasn't surprised to find one that I didn't have, but was a little surprised to find one with her as a Knoxville Cherokee. I didn't even know such a card existed! Pretty neat though.
#4: 1996 Playoff Contenders Open Field #3 Herman Moore 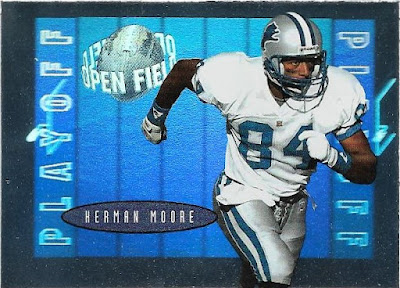 Herman made the list simply because I think that this set is really cool! Oh, and I miss holograms, that's all.
#3: 1993-94 Topps Stadium Club #173 Shawn Kemp

High Court was kind of a boring subset, but this card makes the list on the strength of the photo alone, particularly for the way the fingers of Shawn's off hand are grazing across Chuck's head (for good luck?) as he soars in for the finger roll.
#2: 1987 Topps Who Framed Roger Rabbit Stickers #3 Jessica Rabbit 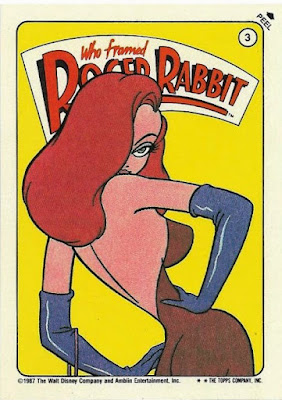 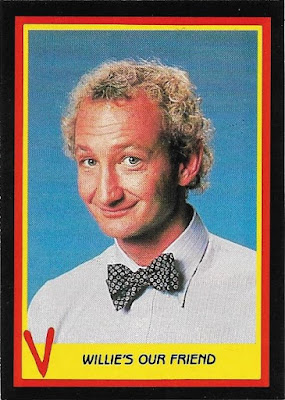 It seems like it's become very trendy to attribute rookie card status to all manner of non-sport cards. Personally, I see it as kind of silly, and a rather piss-poor attempt to inflate the values on what have traditionally been low-value cards. But what do I know, apparently modern collectors are willing to fork over gobs of cash for Iron Man "rookie" cards, and are willing to take out a second mortgage to afford that elusive PSA 10 Volkswagen Beetle "rookie" card. I don't get it, but if I did, I'd be pointing out that this right here is a Robert Englund (best known as Freddy Krueger for you non-film fans) rookie card, and to my knowledge, hasn't been talked about very much, and therefor might be something worth trying to get. But I don't get down like that, so to me it's just a neat card, and one that I had never seen before. I have kind of a side collection going of actors and actresses who appeared in horror films, and this was great addition to that collection. 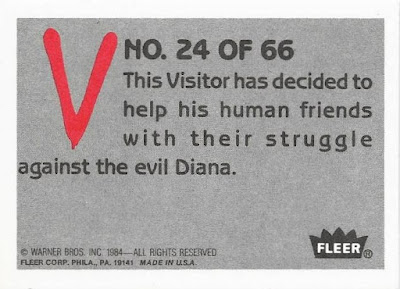 Fleer sure didn't put a lot of effort into these backs, did they? By the by, any fans of the original V series reading this? I don't expect there to be, but if there is, let yourself be known. I'm a big fan of the original films/series', and go back and watch everything about once every two or three years. My copies are still on VHS, but someday I'm hoping to upgrade to DVD.
I've got about 200 more cards waiting to be shipped from the Baseball Card Store, and since this was a lot easier than scanning crap-tons of cards, don't be surprised if you see another one of these lists pop up here sometime in the next few months.
And on a related note, anybody notice the changes that have been occurring over on our favorite dime cards site? I can't say that I'm liking them too much, but if it proves to be beneficial for the couple running the site, then I'm all for it. Those two deserve all that's coming to them... in a good way! [Geez, that sounded menacing 😮]
Posted by Jon at 6:51 AM