My interest in trading on the TCDB comes and goes. It can be fun, but more often than not it requires a lot more effort than I like to put into things involving cards. And as shocking as it may sound to some of my fellow bloggers, I'm not always convinced that the reward is worth that effort. I guess it just depends on the week, or whether or not I have anything else going on, or even if I just don't feel like spending an hour or two packing things up -- as that often feels like "work" work to me, and that's not how a hobby should feel.
Prior to my blogging absence, I accepted like 12 (possibly more) trade offers over a 1-month period, got burned out on trading, and have only done one since. Much like last week's post, I knew I'd want to show a few things off when I started blogging again, but wasn't about to scan all 100+ cards that came from those trades, so instead I picked out twelve for scanning purposes, and am now making yet another top 10 list (12 going in to 10 will make more sense momentarily). Originally I wrote down who sent what, but have since misplaced the piece of paper, and wasn't about to go look at old trades and write it all down again, so here's some cards from some people...
#10: 1988 Topps #750 Bo Jackson 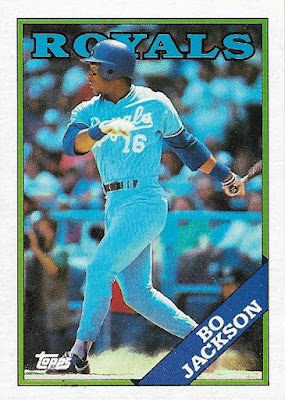 I led off the previous post with a 1992 Donruss Bo Jackson, which led me to mentioning that now that almost 30 years have passed, I have softened quite a bit on the '92 Donruss design. Today's post sees me leading off with a 1988 Topps Bo Jackson, but unlike the last post, I'm not gonna be able to wax poetic about the '88 design. This is the first set that I can recall opening packs from, and yet I have absolutely no affinity for it. I don't think any amount of time will be able to pass for the nostalgia factor to start kicking in, as I just don't like the set, and I can't imagine a day coming where I will ever feel any different about it. Bo's card is okay, although it would've been a lot better had his right foot not been amputated by that dumb name stripe.
#9: 1984 Topps #127 Reggie Roby 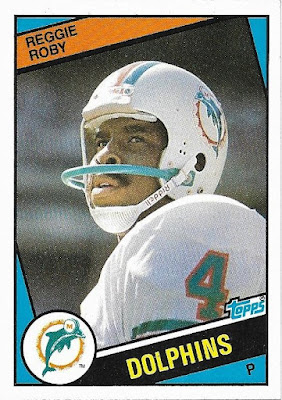 It took longer than expected, but I finally got ahold of Reggie's rookie. It's not a valuable card by any stretch of the imagination, nor is it difficult to come by, it's just kind of a boring card - in fact, it may be his most uninteresting card - and I wasn't in any sort of hurry to acquire one. I knew I would get one at some point, and as expected, I did! As mentioned, it's a terribly boring card, and I'm not a fan of '84 Topps, it's easily my least favorite 80's football set, so why is it making the list? Well, it was my last "new" Double R, so... yeah, moving on...
#8: 1992 Topps Football's Finest #15 Ronnie Lott 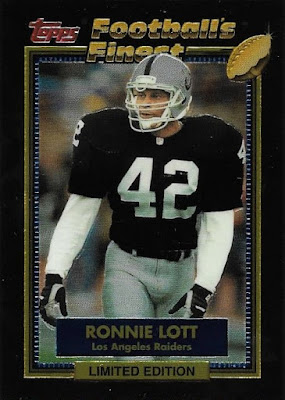 I can't remember for sure (feel free to correct me if I'm wrong), but I think this was Topps' first Finest set, and even if it wasn't, I am of the opinion that they could've stopped after this one, because they never topp[s]ed this design. And I'm not sure why, but this set isn't as prone to Hulking as all of the other early Finest sets -- no silly peels to deal with either!
#7: 2004 Maryland Lottery Baltimore Orioles 50th Anniversary #8 Mike Cuellar and #43 Boog Powell 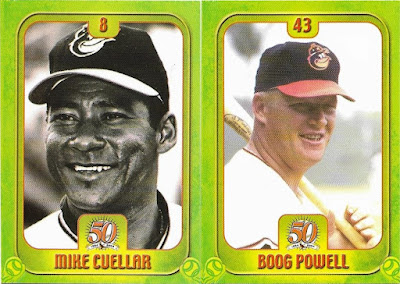 I think that Nick and I were just finding out about the Maryland Lottery cards around the same time, or at least that's the impression I got when I saw a semi-recent post of his that featured Boog's ML offering in it. I only happened upon them by chance while looking at Mike Cuellar's checklist on the TCDB. After looking at the entire ML checklist, I added these two to my wantlist, and then received a trade offer with both of them in it less than six hours later. Was it magic? I believe so, and no one can convince me otherwise :) 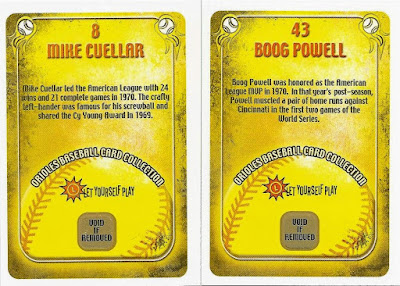 I don't know how these were distributed, nor do I care; I got the two that I wanted, and that's all that matters to me.
#6: 1992-93 Topps #143 (base and gold) Jerome Kersey
It's kind of depressing to think that this card is less than 30 years old, and two of the four guys pictured are no longer with us. Jerome's been gone for a few years now, and Mark passed just a few months ago. Although if we're being technical, the photo itself is at least 30 years old, as it was taken during the 1991-92 season, that year's Western Conference Finals if I'm not mistaken (Blazer won the series 4-2). The photo being from the previous season is easy enough to tell because Blue Edwards (#30 in the background) wasn't with the Jazz during the '92-93 campaign. So anyway, I consider it to be a great image, albeit one that's also a little depressing at this point.
#5: 1993 SCD Sports Card Pocket Price Guide #6 Eric Dickerson 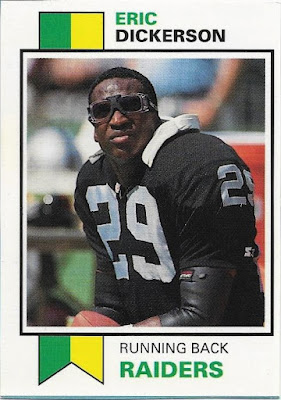 Aside from the SI for Kids and occasional Tuff Stuff sheet, I never saw/knew about any of the other perforated or "U-Cut"  magazine cards (or basically everything that wasn't a promo) when I was growing up. I learned about the Topps Magazine cards once I started reading the blogs, and have only found out about most of the rest in the last year or so. I've been kind of infatuated with all of the "other" magazine cards as of late, and was able to acquire a few through trades, including this nifty Eric Dickerson. Sports Card Digest used the '73 Topps football design for their 1993 set, and for the most part I think it looks really good, even on the non-footballers. I like the fact that these magazine sets seemed to have used photos that we all haven't seen a hundred times before, or since. Having never handled any before, I was a tad surprised by how thin these cards are (thinner than SI for Kids); in other words, one wrong move, and you're gone end up with a severely creased card!
#4: 1993 Cartwright's Players Choice #2 Manon Rheaume 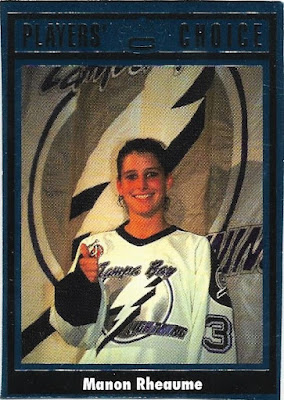 From one magazine card to another, this time with foil! I have no idea which magazine this set came from, but I really dig their look (they sure don't scan very well though). Any other post, and this card probably would've taken the top spot, but Manon had some tough competition...
#3: 1992-93 Topps Stadium Club Member's Only #99 Jerome Kersey 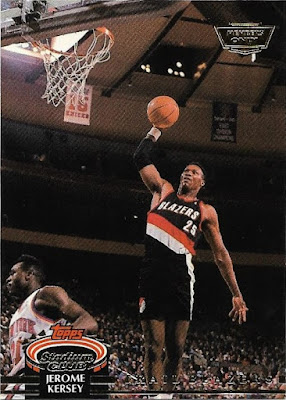 Gerald Wilkins was no match for Jerome in his prime, so in this instance, his decision to duck out of the way was probably the wisest course of action. Love this photo!!!
2: 1992 Impel The Uncanny X-Men #41 Magneto 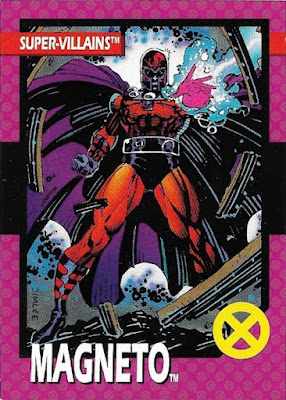 Despite my not wanting to build sets anymore, I'm glad I decided to go back and try and finish this set, it's been a nice little distraction, and has provided all kinds of nostalgia; enough so, that I'm already thinking of trying to build something else after this one's completed.
#1: 1993-94 Fleer #312 James Edwards 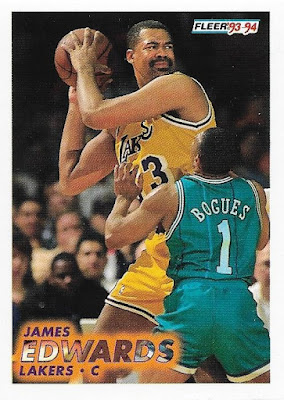 Modern basketball leaves a lot to be desired, modern basketball cards even more so. Sure, they have glitz for days, manufactured scarcity, and all the other bells and whistles that can be mustered up, but I dare you to find me a card from the last ten years, hell, twenty years, that features a better image than this. Go ahead, I'll wait; but in the meantime I'll be over here smiling at the sight of a 5'3" Muggsy Bogues bodying up to a 7'1" James Edwards. Can you capture a photo of someone's thoughts? It must be possible, because James' thoughts are as clear as day, and despite the joy that comes from their glaring height discrepancy, the "look" is what sells this card; or at least it does for me.
Formal trading may not always be my thing, but in small doses it can sometimes not be so bad -- these 12 cards being testament to that. Many thanks to all of the various traders who were able to make them happen.
Posted by Jon at 7:43 AM