A lot of good things have been showing up on eBay lately (non-sport autographs and hard to find cards for my Portland Beavers collection) and I've been having some success with my bidding, which has been both good and bad. Good from a collecting standpoint, but very bad from a financial standpoint. I've mentioned it before, but with very little money to play with these days, usually if I win something on eBay of any real cost, it means that I need to sell something else to cover that won item. This may sound sucky to some, but I have a lot of unwanted things, so this cycle just acts as a motivator for me to get rid of said unwanted things.
This routine has also made me reevaluate a lot of my stuff, finding out that I no longer care about certain things that I had been fond of, and conversely, finding out that I still care about certain things that I previously hadn't. Such was the case when it came time to put up my various Post Cereal cards. I had already pulled out various cards for player collections, but was still left with a decent sized chunk of 61's and 62's, and a much smaller selection of 63's. There was a small amount of '63 Jell-O's that also needed to be dealt with.
I had decided a couple of years ago now that set collecting was no longer for me, and even though I still felt a little something for the Post (and Jell-O) cards, they were still added to one of my boxes of cards to sell. However, when it came time to list them, I found myself having trouble doing so, sort of.
Upon seeing again how many cards I had from '61 and '62, and still feeling some affinity for them, I decided that I just couldn't list them, and instead put them in a keepers box; thinking that maybe someday I'd give the sets another go. The same couldn't be said for my 63's (Post and Jello-O). Having only about 15 or so of each (after those that fit into player collections had been removed), I figured I was so far away on those that I might as well cut my losses and sell them. Which I did, and very quickly too. I want to say that that was back in February or March when I had been making a big push to list my abandoned set builds.
Fast forwarding to last month, I started feeling like something was missing with my card collecting. Thankfully it didn't take long to realize what it was; I needed a set to build. This led me to getting out my stacks of '61 and '62 Posts, and deciding that someday was now, and that I was gonna start working on the sets again.
The first step was to decide if I wanted to remove all the cards from player collections, and even though I didn't really want to, I did it anyway. The second step was to make checklists... 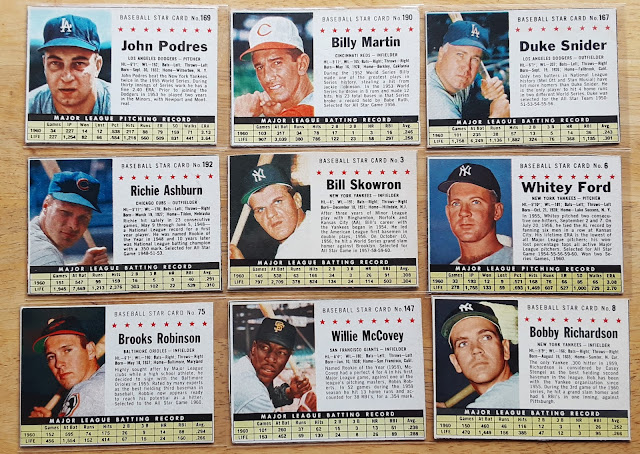 For 1961, I found that I had 57 of the 200 cards. Not bad, not bad at all. Above is what I figure are the best cards from those 57 (I haven't looked up short prints yet, so I may have one of those and not even know it). This set came in two different versions, the ones on boxes, and the ones you could get through the mail. Mine are all from boxes, and those will be the only kind that I'll be seeking out. 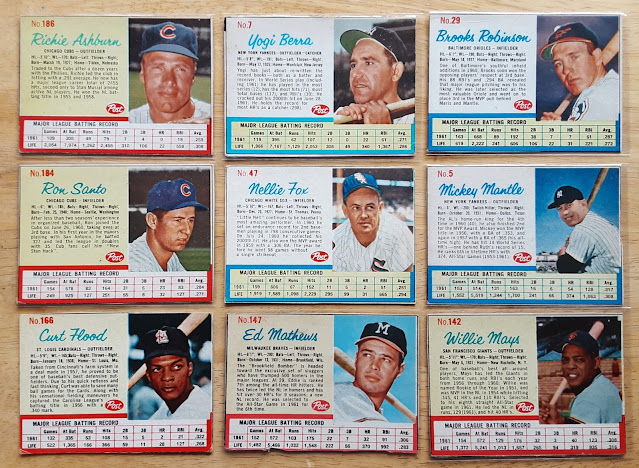 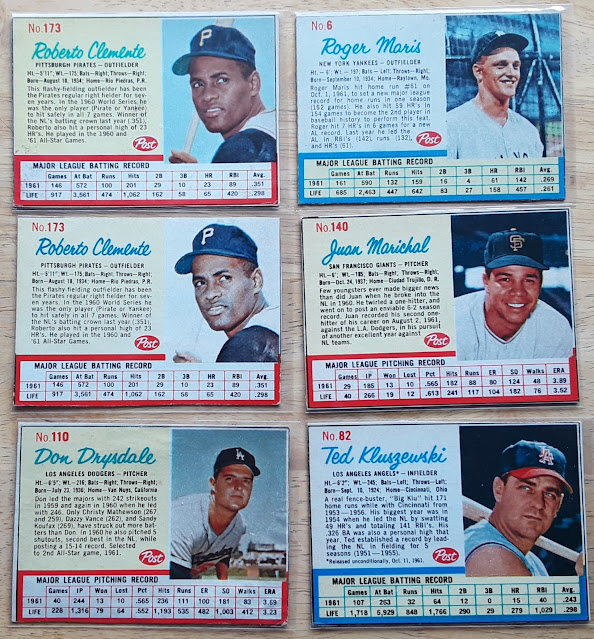 I can't remember if I ever mentioned it on here or not, but a few years ago (maybe five?), I accidently won an extra Clemente on a Sportlots auction. I wanna say it was around six or seven bucks, so it wasn't the end of the world, but was still something that I didn't really need. Since it is fairly nice, I took with me to a card show not long after getting it in hopes of either recouping my money, or at the very least, trading it. None of the dealers who regularly buy from people would even look it at the time. Later that day, since I was already there, I also took it to the card shop in Nashville, hoping that the owner would have some interest in it. He didn't. I was told, and I believed him, because he isn't the sort to mince words, that no one ever came in looking for Roberto Clemente or Post cards. Obviously the card world has changed a bit since then, and looking online now, it appears that there'd probably be more interest in it now than there was back when I got it. Ideally, I'd like to trade for another need, but given how poorly my attempts to pull off formal trades online have gone thus far, I'll probably just have to sell it, and then use that money for some set needs. 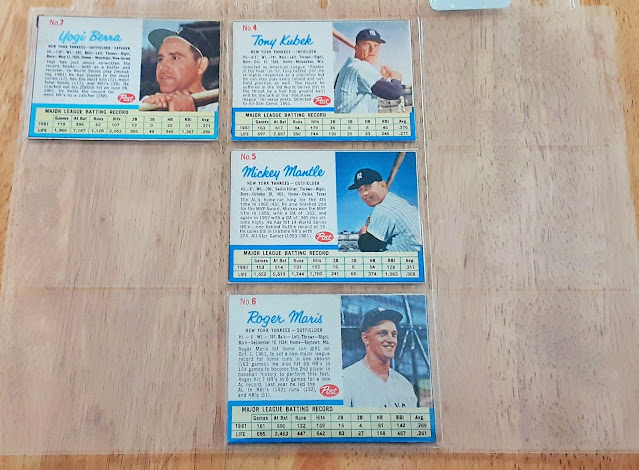 After bindering the the 62's, I found that the most cards I had for any one page was four. This by far was the better of the two. And what's more, I was able to add another card to it during the recent pre-Black Friday sale on COMC when I picked up Elston Howard (#8) for $1.48.
I realize too that I've stated many times here on the blog over the last couple of years that I was done with set collecting, forever, which now makes me look like a real hypocrite. Yep, I'm full of shit. But wait... it gets worse! 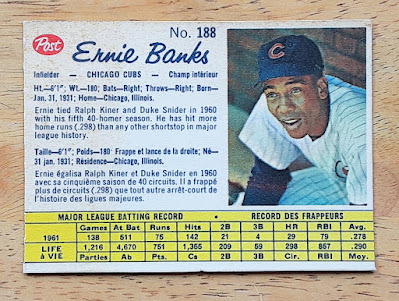 I've also decided to chase the 1962 Post Canadian set as well. And I'm doing so despite only having one card from it (I think that this is the third time that this Ernie has appeared on the blog). I really should think twice about this one, especially given what happened just a couple of weeks ago.
I found someone on the TCDB who had 19 of these up for trade, so I sent them a message to gauge their interest. It seemed high, so I went ahead and started trying to find things off of their wantlist. While doing so, I noticed that their profile said that they like doing bigger trades, so I decided to try and make it into a bigger trade. I spent a good three hours looking for things, and probably another hour just composing the trade, only for them to turn it down and say that they don't like to trade with my sort. Apparently, I didn't get the memo that asking about the condition of vintage cards that I can see is now a faux pas? I guess I'm that sort. It's ironic too because I was told by a fellow blogger some years ago, that I should try and avoid this person. Unfortunately, I saw that they've been trading with other bloggers recently, and that combined with their huge positive feedback rating made me ignore that old warning. Obviously I should've just listened to it and saved myself the four hours. Lesson learned though, don't ignore warnings from fellow bloggers; they usually know better -- especially when it comes to the TCDB. [I'd still try again if they ever changed their mind though]
And I may be the sort who asks questions about card conditions, but I'm not the sort who makes year-end lists for the blog. However, if I was, this would surely take the #1 spot for the biggest card related disappointment this year. It's been weeks, and I'm still pretty bummed out by it.
Oh, and about this whole deciding to 'start up some old sets again' thing, yeah, it gets even worse... 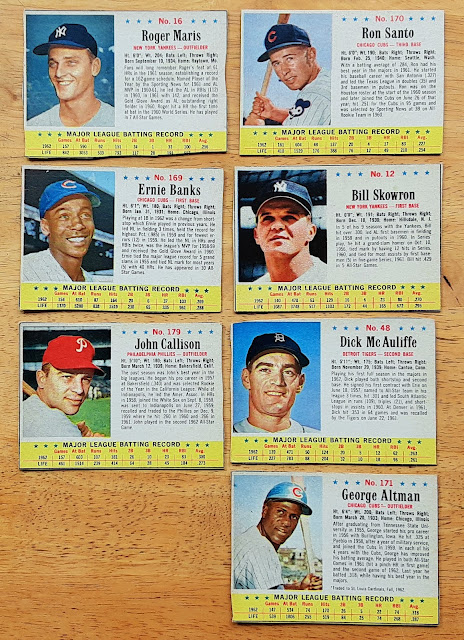 After bindering up the '61 and 62's, I got to thinking about 1963, you know, that I mentioned selling 15 or so cards from, yeah, that one. Digging through player collections yielded a couple of big names, although the Maris isn't ideal with that cut. Still an okay start though, I guess. None of the 15 cards that I sold would be overly difficult to get back, as I see a lot of them in almost every single lot currently on eBay. I guess I'm doing this one again, too. But wait, it gets worser (and yes, I know, that's not a word)... 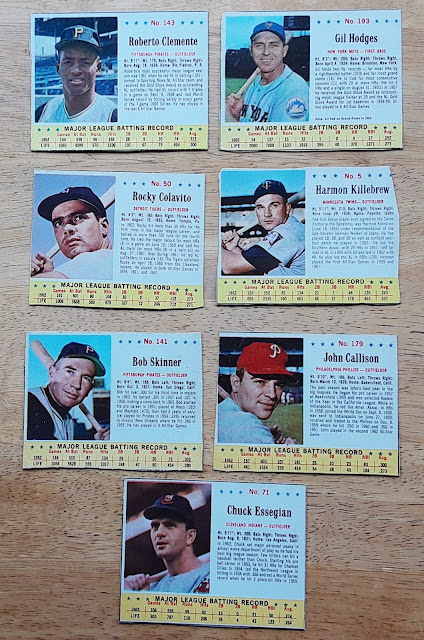 I'm picking back up with the '63 Jell-O's too. This was what I still had left. The majority of the one's I sold were poorly cut, and were not SP's or HOFers, so with a little patience, those won't be too difficult reacquire.
A couple days after paging everything up, I remembered that I had overlooked at least one card, and after setting out to look for it, that one card ended up yielding four. 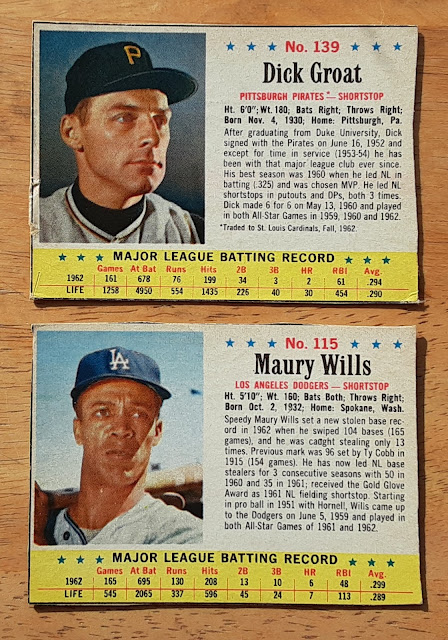 A couple more '63 Posts that I had held onto. Dick Groat came from my miniscule collection of his, and Maury came from a page of his stuff that I have. That page looks a lot less interesting now :( 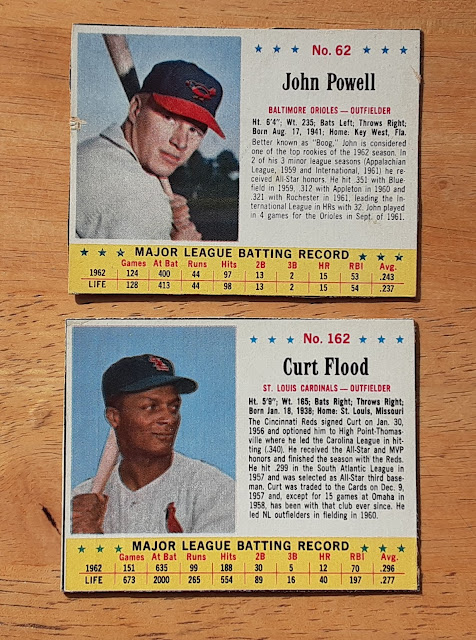 To the '63 Jell-O's, I was able to add, Boog, who came from the Boog collection, and Curt, who came from a page of his stuff that I've got going.
And in case anyone is wondering, yes, I know, there are some expensive and hard to find cards in these sets; don't harsh my mellow. I'll deal with those later. I'm under no illusion that any of these sets will ever be completed, but since making this decision, that feeling of something missing that I mentioned earlier has dissipated, and I've really been enjoying the process so far; it feels like old times. Well, sort of, I don't feel like I absolutely have to complete the sets to enjoy them, like I used to.
The only real negative for me so far is that after looking at these sets online for the last couple of weeks, I've come to the conclusion that if I want to work on these, I'm gonna have to start going to shows again; because the online prices are just not very good anymore. That being said, I did get that Elston that I mentioned earlier, as well as a '61 Lee Walls (for 55¢) and a '61 Bobby Shantz ($1.34) during the COMC BF sale. Other than those though, the pickings were awfully slim on COMC, lots of beaters for way more than they should be. Sportlots and the Beckett Marketplace don't appear to be much of an option either. And eBay seems like it takes so much more effort these days, especially when trying to land set needs at reasonable prices. Having been away for so long now, I'm not sure if anyone who's setting up at the twice-a-month Nashville shows would be bringing any Post, so I think I'll just wait until the next big show in March.
There used to be this couple that only set up at the big shows who only did vintage, and I remember them having many binders full of Post cards. And I guess even if they aren't going there anymore, with probably close to 800 tables, one would have to think that somebody would have some Post for sale, right?
Posted by Jon at 9:26 AM