[Editor's note: I just wanted to give a quick head's up to everyone about a new blog on the block called, The Hobby Love, and was hoping that maybe when you got done with your claims (if you're making any), you'd consider popping over and showing Jeremy some "hobby love" by giving his blog a follow.]

Alright, the PSA's been covered, so let's get to this week's free stuff... but first... a couple of quick reminders:

If you didn't see Wednesday's post (and looking at the numbers, I can see that you didn't), I thought I'd mention again that since I didn't do a FSF last month (the end of the month came and went before I even realized it), I'm making it up by doing two this month, today, and next Friday.

And as per usual, I'm not expecting anything in return for whatever you claim, all I ask is that your claims be on cards for your collection, and not your trade box.

Also, after some of the critiques that have arisen in recent months, I'm making one small change to the way I do things, this being that people who haven't commented on any non free stuff posts in say the last year or so, will now be limited to five cards per FSF post. As others have pointed out, it's not unreasonable to want, or to ask, some of the folks who are getting free cards to show up occasionally and support the blog, especially when there's not something to be gained by doing so.

Oh, and lastly, I always forget to mention this, but if I've never sent you anything before, please be sure to send me an email (jtef82 at gmail.com) with your address. 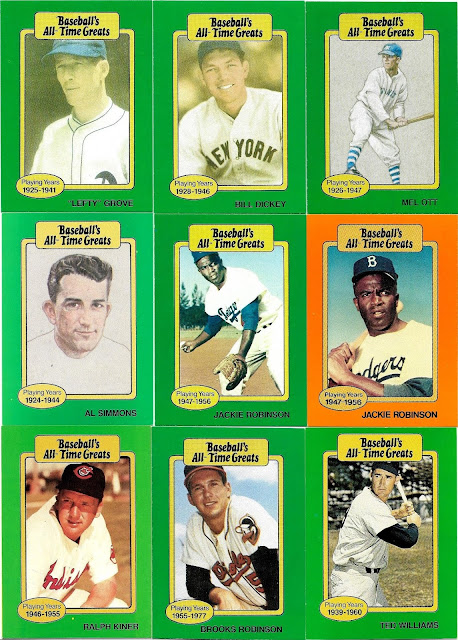 First up is group of 1987 Hygrade All-Time Greats. Please note that a few of these have a tiny bit of edge wear. Update: Dickey, Kiner, and both Jackie's have been claimed. 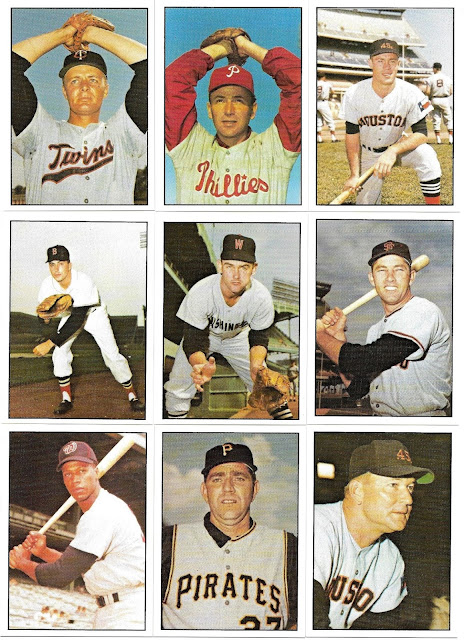 Next up is a selection of 1978 TCMA The 1960's. Since there are no names on the front, starting from the top and going left to right, we've got: Dick Stigman, Ed Roebuck, Mike White, Bill Spanswick, Dave Stenhouse, Jim Davenport, Chuck Hinton, Ron Kline, and Harry Craft. Update: Spanswick and Mike White has been claimed. 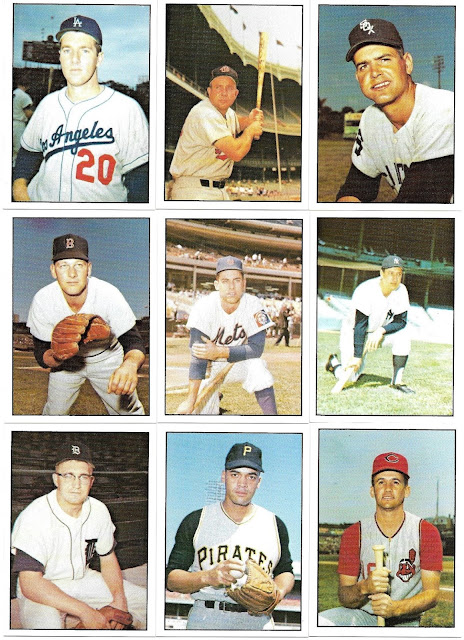 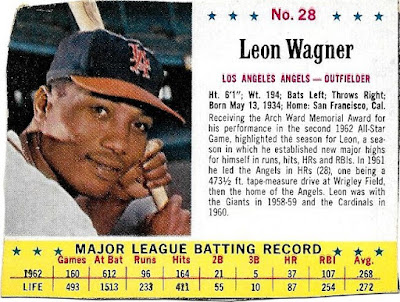 Normally I'd have more vintage to choose from, but this terribly cut 1963 Jello is the only one I've got up this week. Update: Leon's been claimed. 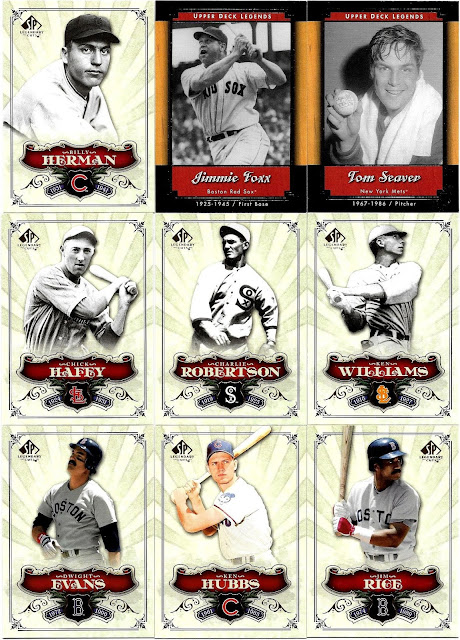 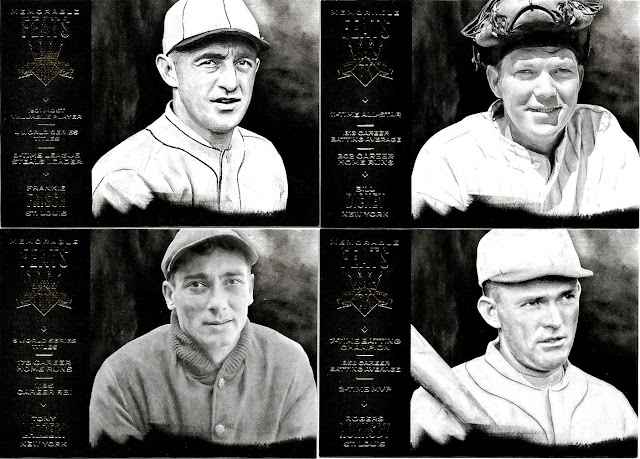 This scan of 2016 Diamond King inserts came out terribly, and I don't know if you can read the names or not, so from left to right there's: Frankie Frisch, Bill Dickey, Tony Lazzeri, and Rogers Hornsby. Update: These four have been claimed. 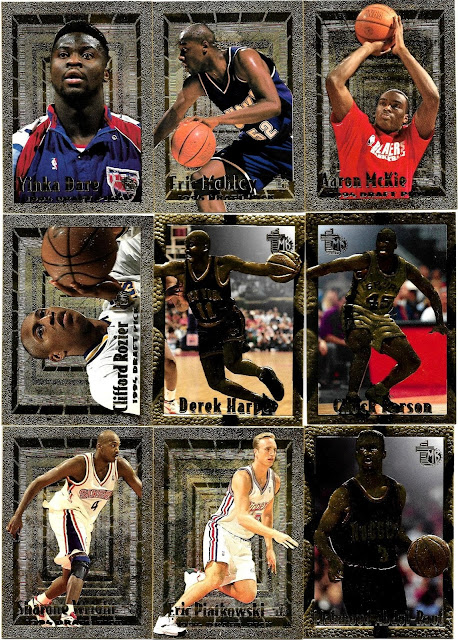 Another set that didn't want to scan well are the Golden Idol parallels from 1994-95 Topps, but trust me when I say that they look great in person. Update: All of these have been claimed. 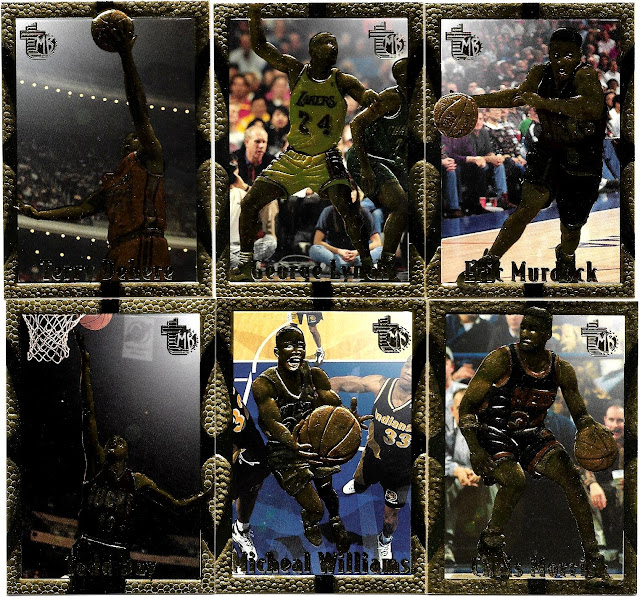 More poorly scanned Golden Idols. The unreadable names in here are: Terry Dehere, Todd Day, and Chris Morris. And these too are in fine condition, despite what you're seeing here. Update: All of these have been claimed. 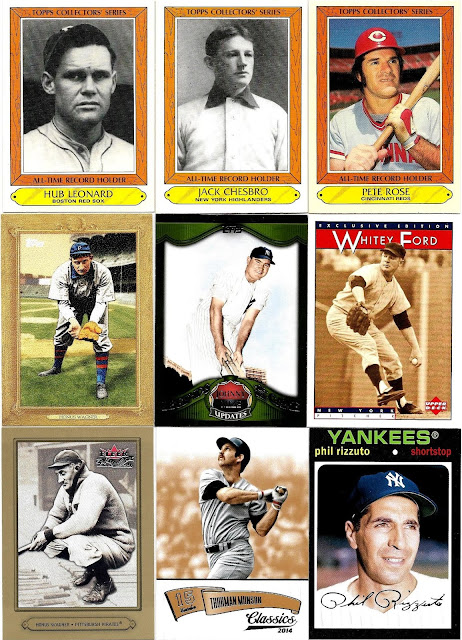 And finally, a mish-mash of greats! Update: Chesbro, Leonard, Rose, Ford, Munson, and Rizzuto have been claimed.

That'll do it for this week, feel free to start claiming whatever tickles your respective fancies.


Thanks for taking a moment to look at my page.
Posted by Jon at 3:25 PM