Looking back through Rose(Bowl)-colored glasses

If one were to ask me how I feel about the month of January, I'd probably be a little leery over answering such a seemingly inane question, but after I got past my initial suspicions, I'd let whoever it is know that in general, I'm not big fan of it!

January means colder weather, much less sunlight, longer nights, and all of the good tidings and cheer that come from the Christmas season are abandoned, and everyone goes back to being their normal butth*le selves. Oh, and did I mention the cold, yeah, I really dislike being cold.

All of that being said, the last two January's have brought one thing that I do like (a lot!), and dare I say, look forward to, this being Andy's (Stadium Fantasium) annual Rose Bowl contest -- aka, my favorite blog contest.

Between being tiered, so that someone can win upwards of three different times/prizes, to the large list of prizes that the winners get to choose from, and to the fact that there can be multiple winners, there's really nothing that a body can't not like about this contest.

Being so fond of it, you've probably guessed by now that I entered again this year, and since I'm here talking about it, you've also probably guessed that I won something. If you did guess and/or assume both of those things, good for you, you're gonna go far with that gift of yours. Anyway, yes I did enter, and yes I did win something, in fact I won two somethings!

It's been a few months now, so the details have gotten a little fuzzy, but I do know that I came in second place for the second year in a row, falling once again to my "arch-nemesis", Fuji, who's taken home the gold for the last two years.

As per usual, there was a great list of prizes to choose from, but there was one in particular that I had been eyeing since this year's contest was announced, that being... 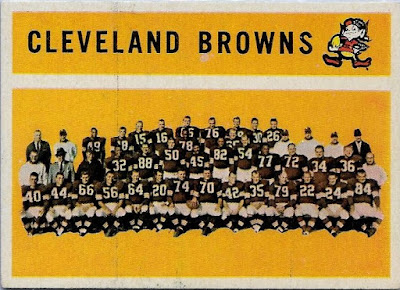 ... the lot that contained this fantastic 1960 Topps Cleveland Browns team card! There are more than a few recognizable names in here, but the two that standout the most are those of Jim Brown and Bobby Mitchell. It's not everyday that I get to add a new Jim Brown card (and I do consider this to be a Jim Brown card) to the collection, so no complaints from me. 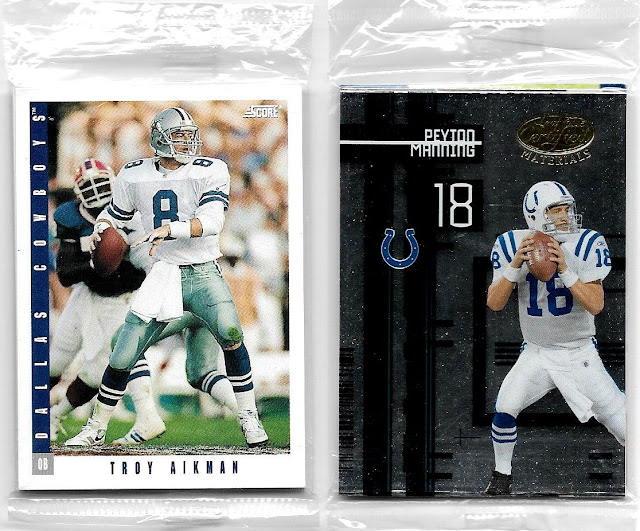 Included with the Jim Brown, was a 1993 Score Quarterback Club pack (on the left), which contained the following: 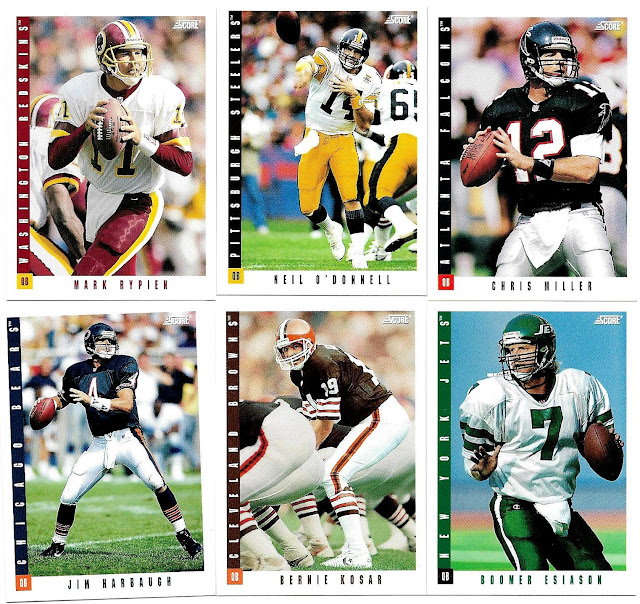 Not a bad group, eh? Don't ask me what was going on with Jim Harbaugh though, looks like he was trying to get away from the scan.

The second prize that I selected was also a lot (most of the prizes are), that had the second pack that you saw above in it, which was some sort of sampler pack(?): 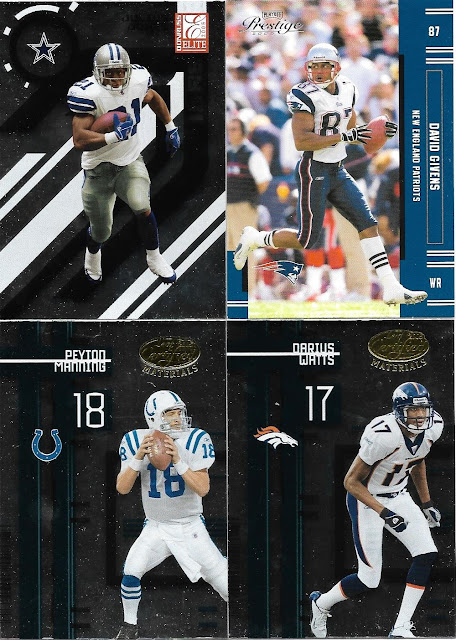 There were three different sets represented in the pack, all of which were new to me. Three of these have a mirrored finish, which means that they weren't going to scan good, no matter what I did! I was only familiar with one of these guys, but it's always fun to be able to open up a pack of something.

As fun as opening pack is, the real reason that I chose this prize was because of it's lot mate... 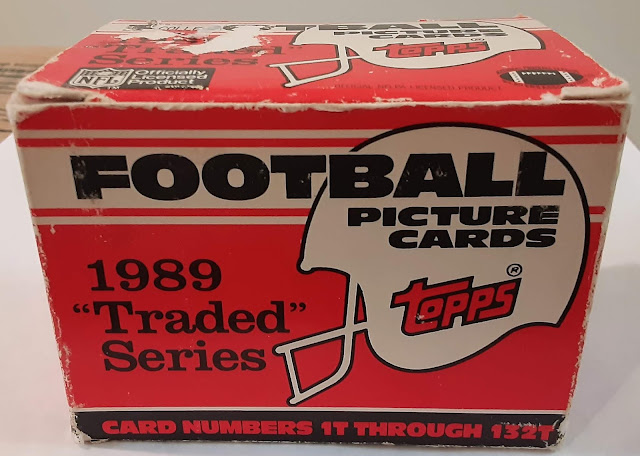 Does anything scream late 80's/early 90's card collecting more than mini-boxed sets (that's mini-boxes BTW, not mini-cards, although those certainly were indicative of the era as well)? I knew of at least two cards in here that I really wanted, and had never owned before, so it was kind of an easy pick. 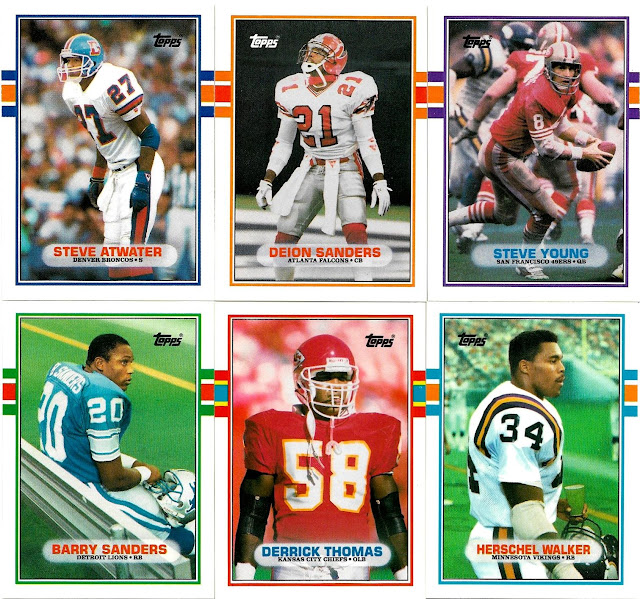 Here are just a few of the highlights. Had I known that Steve Young was in here too, I would've said that there were three cards that I really wanted, but as such, the two that I referred to, were the Sanders and Atwater rookies. It's really neat to own this Barry Sanders after all of these years, it's one of those cards that I wanted as a kid, but seems to have been much more expensive back then.

As much as I love this contest, I do have one complaint, and that's in regards to the low turnout that occurred the last two years. I get that it's a football contest, and most of the blog-o-sphere is the "baseball or bust" or sort, but most of the prizes are baseball related, so it shouldn't be that hard to rattle off three guesses and hope for the best, especially too since by doing so, you're also supporting an endeavor of one of your own. Heck, even someone like me, who hasn't watched a current sporting event in almost five years (I do read recaps and occasionally watch highlights though), is able to show up and pull a couple of guesses out of my backside... it's not that hard!

Many thanks once again to Andy, not only for the contest itself, but also for all of the generous prizes that are offered up. Things are still sort of sketchy right now, so who knows if there'll even be a Rose Bowl next year, but knowing what comes with Rose Bowl season, I'm certainly hoping that one will be held.


Thanks for taking a moment to look at my page.
Posted by Jon at 8:31 AM