Actually, it's probably most of the time.

My most recent purchase is a perfect example: 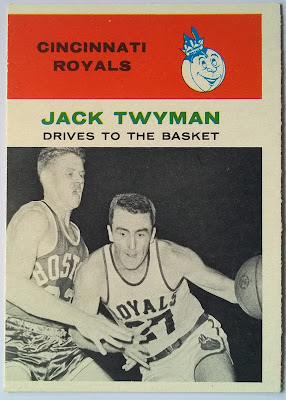 I was the only bidder on this card. Can you guess why? Well I'm about 99% certain it's because the card is off center. And of course this means all the grader's out there won't even look twice at it.

I really don't get the whole grading fad (to me it's still just a fad). But from what I have been able to gather, off center cards seem to be just about the biggest flaw a piece of cardboard can have when it comes to grading.

The total with shipping for the card was $4.24, and there is no way you would ever find a '61 Fleer (HOF'er) for that price at any card shop or show. Yet, no one else bid. Like I said, I really don't understand.

For those that care here's the back 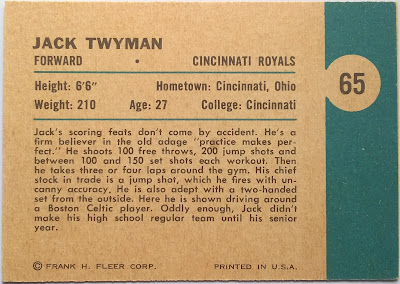 It's interesting to note that the Celtics player mentioned on the back (shown on front) is another Hall of Famer, Frank Ramsey. So two hall members for less than the price of one!
Posted by Jon at 3:35 PM