After seeing the success that many of the bloggers have had with obtaining autographs through the mail I decided to give it a try. Mind you this isn't my first time doing so, it's just this time I won't be reaching for the stars. You see, as a youngster in the early 90's I was naive enough to try and obtain signatures of names such as Ken Griffey Jr. and Michael Jordan. And as you can probably guess, that didn't work out too well. After so many failures I just kind of developed a mental block on the whole idea.

So after all these years I'm ready to try again with much more reasonable expectations, of course.

In the last two weeks I have sent out 12 envelopes. And two days ago the first one came back from "The Original Bull" Jerry Sloan. 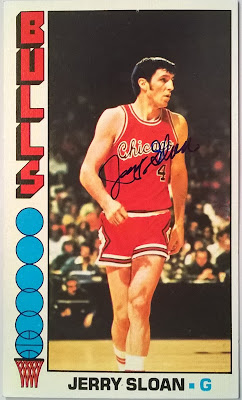 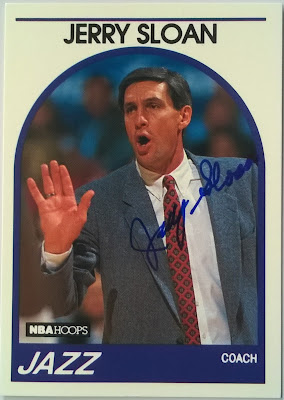 I'm assuming most people know who Jerry Sloan is, so I won't rattle off a bunch of stats from his playing days or his long coaching career. I also won't mention that he is a Hall of Famer who is known to be generous with his signature. So a big thank you to Mr. Sloan for signing both cards and for giving me hope for future returns.
Posted by Jon at 3:56 PM