I have about two dozen different unopened packs laying around, and I'm in desperate need for an occasional fluff post, so why not create a fluff series to showcase some of these random packs, yes? No? Well, honestly I don't really care what anyone thinks about it, I'm just gonna go ahead and do it anyway. Besides, if you don't like it, I'm only going to do one every couple of weeks, so it's not like you're going to be besieged by them or anything.

First up will be the Prizm rack pack that I got for Christmas: 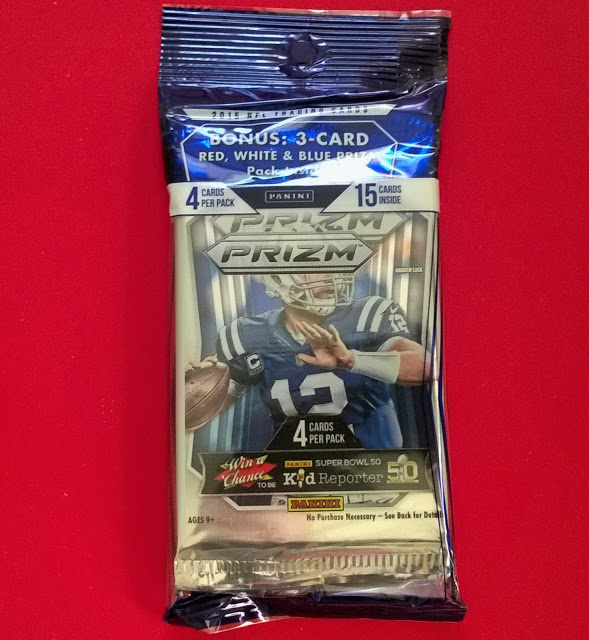 If you've ever opened a Prizm rack pack before, you probably already know how they're configured, if not though, they're made up of 3 retail packs (4 cards in each pack), and 1 "bonus" pack of the red, white, and blue parallels (3 cards in that pack).

I have never opened any packs of Prizm football before, so this should be fun... no matter how it turns out.
﻿
This first pack wasn't too bad, I mean I'm at least familiar with three out of the four players so that's something.

Andrew Luck insert: Can he be referred to as a bust yet?

Garrett Grayson: No idea? I see that he's from Vancouver, WA though, a place that I called home for a few years. Maybe that small connection is enough to warrant a small player collection... is what I thought before checking COMC! There are currently 367 different cards of his sitting on the site, and 85 that are sold out - why does a guy who has yet to play a single down in the NFL have over 450 different cards? Oh well, no Garrett Grayson collection for me.

Von Miller: He was pretty good, but his cards are meh to me.

Warren Moon: Now were talking! He's the kind of player that I want to find when opening a pack.

Dorial Green-Beckham: Here's a surprise... never heard of him! He apparently got stopped a couple of months ago with 8 pounds of pot, and then decided to resist arrest, me thinks that he won't be back in the NFL anytime soon.

Tamba Hali silver prizm: Never heard of him either. He retired not too long ago, finished his career with 89.5 sacks, not bad for 12 seasons.

Randall Cobb: I remember him from his time at UK.

Julio Jones: And I remember him from his time at Alabama.

David Johnson: I've seen his name in print before, but that's about it.

Lawrence Taylor: Yes!!!! But why couldn't he be the red prizm?

Denzel Perryman: I have ever mentioned how much I dislike modern rookie cards?

T.Y. Hilton: Decent player, but today's receivers bore me, things have been made too easy for them.

Matt Forte: Saw him play quite a bit, he was fun to watch early on in his career.

Overall it certainly wasn't the best rack pack ever, but it was still fun to open, especially since it'll probably be the only one from the 2015 set that I ever get to open. And as you may have noticed, there aren't too many keepers, so if anyone sees something that tickles there nether regions, don't be shy about speaking up.

On a completely unrelated note: 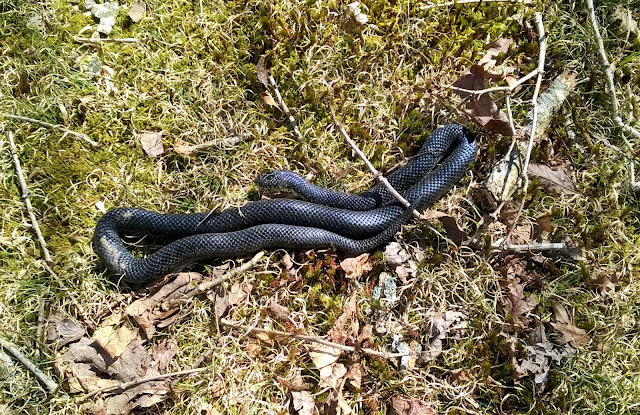 The first sign of Spring was seen here this past Friday, taking the form of this 2 foot long (and some change) juvenile black rat snake, who came out to soak up some sun (saw him/her in almost the exact same spot again yesterday). This is a very good sign, as the warm weather can't get here soon enough, at least in my opinion that is!


Thanks for taking a moment to look at my page.
Posted by Jon at 9:14 AM