During the life of this blog, nothing has vexed me more than how to go about showing the goods from my yearly COMC shipment. I've tried so many different things over the last couple of years that I can't even remember them all.

Last year I thought that I had finally come up with a solution with my "COMC Sundays" series. It worked out pretty well... for about three weeks! I found out pretty quickly that limiting this stuff to just Sundays didn't work out for me, I just need more flexibility than that. Plus the whole grouping of similar items together thing, didn't really do much for my want of variety.

This really wouldn't as much of a problem (and yes, I realize that it's not a "real" problem) if I just did like everyone else and got multiple shipments throughout the year, but I'm just too cheap to pay for shipping when I know that it'll be free after the Black Friday sale. Because of this, I always end up with a couple of hundred cards - all bought and paid for with credit that was earned from doing the Challenges - right before Christmas, and then have no idea how to work them into the blog... hence this longstanding problem.

Thankfully, I do believe that this problem of mine has now been solved, and the solution to it came to me quite by accident back in January while I was editing some photos.

I don't know if it had always been there, or if had just been added after one of the seemingly never ending updates, but I noticed an option at the top of the open folder page that said "shuffle". Upon seeing this new to me feature, I couldn't figure out for the life of me why anyone would want to shuffle their photos, so I just went back to my editing, but while doing so, I kept thinking about this new option -- so when I was done, just for poops and guffaws I gave it a go on the picture folder that I was in, and it did just what I thought it would do... it mixed up my photos/scans!

I know that this probably isn't too terribly exciting to read about, so I'll try to get to the point a little quicker, which is, after I saw the mix, an idea happened, one that'll likely change the course of this blog's history (well, not really, but it sure sounds dramatic, doesn't it?). The idea, put all of my COMC photos/scans into a single folder, shuffle it, and then make a blog post featuring the first ten items, in the same order that they came out of the shuffle in. Sounds pretty simple, right? So let's hit that shuffle, and see what we end up with!
﻿
No need to adjust your television sets, I am indeed leading off with a hockey card, or rather the shuffle has me leading off with a hockey card. Of the 300 or so cards that I stockpiled last year, this Gordie Howe would probably make my top 20 list, not only because it's Gordie Howe, but also because it's one of Panini's Progressions cards, which are something that I've quietly been collecting over the last year and a half (I have a post in the works about that collection).

For anyone who may be unfamiliar with them, the Progressions are essentially proof cards that were added to Panini's promotional/seasonal sets (Black Friday, Father's Day, etc) from 2012-14. The proofs came in four colors, black, cyan, magenta, and yellow - and each color was limited to just five copies, which can make the completion of a rainbow quite difficult.
﻿
As far as 90's basketball inserts go, Record Numbers isn't one of the more exciting ones. However, if you're not rolling in dough, and you like the idea of actually being able to complete a 90's basketball insert set, well then, this one just might be worth a consideration - it's a lower tiered insert set, which means it's cheap, and the cards are quite plentiful.
﻿
Depending on who it is that's writing about him, Ben Chapman was either a very good player, or a player that was great, but will never be considered for the HOF because of his bigoted ways, especially since those unfortunate feelings of his were very much directed towards Jackie Robinson. By all accounts, he did change, and see the error of his earlier beliefs towards the end of his life, but he will most likely always be remembered for his actions during his playing/managerial days. 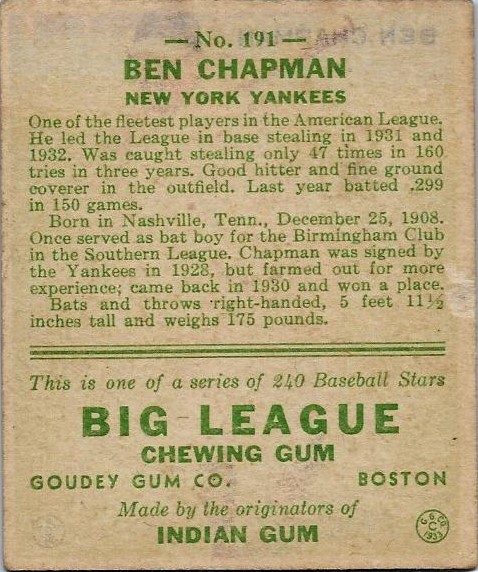 I know that some folks like seeing the Goudey backs, so for your viewing pleasure I did go ahead and scan all of them.
﻿
Is that Saddam Hussein in the background?
﻿
I had a lot of duplicates in my COMC order, so I just scanned them altogether, otherwise, at least in Ichiro's case, I'd end up with four different posts that contained the same card, and that doesn't work for me. ﻿﻿﻿
﻿
I had stopped collecting cards altogether by the time this set came out, so I never got to experience these wonderful parallels when they were new, in fact I didn't even know about them until last year. Too bad they don't scan very well, but you can at least still see the serial number down by Corey's right foot. Something that was limited to just 100 copies back in 1999 might as well have been the equivalent of one of today's 1/1's.
﻿
One of my favorite photos from the 2013 Prizm set. Dave DeBusschere isn't exactly the most popular player with the kids, which works out well for me, because then I can pickup as many of the parallels as I want without any competition (provided that the price is reasonable of course).
﻿
This might be a good time to mention that there is going to be a lot of Prizm parallels in these posts. Uncle Cliffy was one of my favorite players as a kid, Panini seems to be fond of him too, as they have included him in multiple years worth of Prizm sets.
﻿
At the time of it's purchase, this was my first ever E-Xceptional on the football side. This is one of those insert sets that E-X did across all sports, and all of them look amazing!
﻿﻿
This is one of those cards that I had obviously gotten quite awhile ago, because I didn't even remember buying it until I saw it in with the shipment. At the time of it's purchase, I was still under the delusion that I could actually complete this set somewhere down the road, that delusion has since passed, so since doesn't fit into any of my recently started mini-collections, it'll end up getting sold or traded (probably sold).

Not the best way to end this first post, but I guess that's what happens when you let a randomizer choose the order of the cards. Overall though, I liked the variety, hopefully a few of you did as well. Looking ahead, I can see that there won't be a lot of incoming cards in the next couple of months, so by turning this into a weekly series, I will at least be able to have some card content on the blog for the foreseeable future - at least until they run out, but by then I should have this year's stockpile in hand to keep the series running.


Thanks for taking a moment to look at my page.
Posted by Jon at 9:13 AM