Hopefully everybody knows the deal by now, cards from COMC + picture program's shuffle button = blog post/series. Cool? Cool.
﻿
I am now only one card away from completing this set. I've sort of, at least temporarily(?), lost interest in it, so the prospect of completing my first parallel set isn't nearly as exciting as it once was.
﻿
I don't remember exactly when it was, but sometime last year the Challenges were open for what seemed like days on end, and I in turn, wasted quite a few hours of my life doing them (the same could be said about the last couple of years) -- the only bright side of this was that somebody went ahead and added around half a dozen original Mars Attacks! cards to the site right after this multiple day marathon of Challenges. All of the cards were in the good to very good range (if you look closely you can see a crease in the upper left hand corner), which is about the best I can hope for, as anything nicer means that they'll probably be out of my price range. These newly listed cards were priced surprisingly well, but I still went ahead and made offers on all of them, the seller ended up accepting all of said offers, so when all was said and done, I paid (in earned credit) about $6 apiece for all of 'em... this would be one of my favorite purchases from all of last year.

"Horror in Paris" has always been one of my favorite cards from the set, mostly because it's always reminded me, imagewise, of The Monster That Challenged the World. 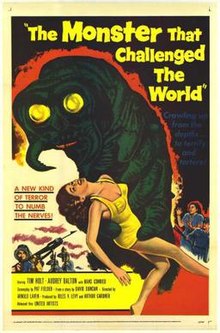 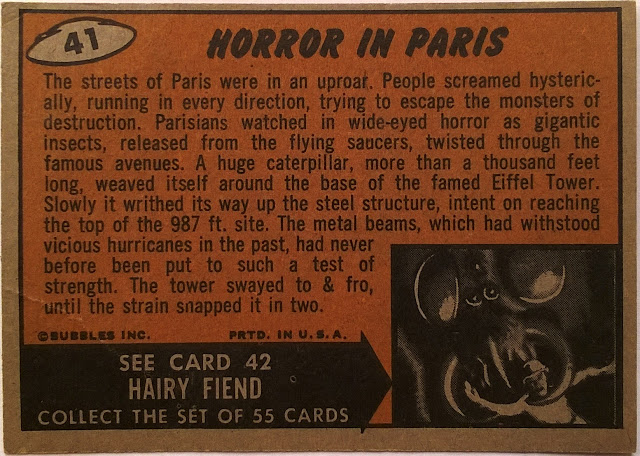 As usual, I don't know if anyone cares, but here's the back (obviously).
﻿
After a year away from the game, Jamie Moyer returned to baseball in 2012. Signing with the Rockies, he went 2-5 in his 10 starts, before being released by the team. Having been a big fan of Jamie's for quite a number of years, I was a bit surprised that I never knew that he had made it into the 2012 Update set, so when I saw this card for 32 cents during the Black Friday sale, well, I just had to have it.
﻿
This is why I don't usually scan Prizm cards, they end up looking like hot poop! Love this card though, Manute is one of the guy's from the 2013 set that I'm collecting as many parallels (including doubles, triples, etc.) from as I can.﻿
﻿
Al here was one of those "priced so cheap that I couldn't resist" kind of purchases, the kind that I'm trying to cut down on, but between the fantastic condition, and obscenely low price, I just couldn't not get it. The card, and the player, don't really fit into my collection anywhere, but Mr. Brazle was a member of the Cardinals team that bested the Red Sox in that '46 World Series that went seven games, so I guess that's something?
﻿
Have I ever mentioned how much I love the retired portion of the 2018 Classics checklist? These gold chrome refractors Optichrome's are numbered to 65, I own five of the Dickerson's. As fun as it would be to try and chase them all (not a real possibility), I'd be content with just getting four more of them, that way I could have a whole pages worth.
﻿
Not much to say about this one, it was cheap, and I needed it for my set... so here we are!
﻿
Sometime last year I was reading something somewhere, which ended up leading me to read an article about Connie Johnson, who I had heard of, but never knew anything about. After learning of the success that he had had in the Negro Leagues, plus the character of the man himself, I decided to seek out some of his cards -- he only has four, so building a collection won't be terribly difficult. As of this writing, I'm only missing his '56 Topps rookie card.
﻿
Markel Brown isn't one of the Prizm guys that I'm collecting, I just really like the image, which in my opinion, is one of the better one's from the 2015 set.
﻿
Today's final card is a pretty cool one, my first, and still only, Alex Ovechkin! I came across this card on the very day that it was added to the site, it started out at $10, which was a little high for me, so I put it in my watch list (fully expecting someone to buy it). Within just a couple of days it had dropped to $8, then one morning, about a week later, I checked the watch list to see if anything was on sale, and the card was down to $5???? I tell ya', I couldn't hit that buy it now button fast enough! I just couldn't believe that, much like the Kobe in last week's post, a card of such a big name - that is limited to just five copies - could be had for so little. It really show how uninterested most collector's are in these Progressions, oh well though, it just means that there's more for me :-)


Thanks for taking a moment to look at my page.
Posted by Jon at 9:20 AM